German national team forward and World Cup winner André Schürrle  announced his retirement from soccer at the end of last week, telling the weekly Spiegel magazine that "the decision has been brewing inside of me for some time. I don't need any more applause." He is just 29 years old, theoretically the age when a player is at his physical and mental peak -- combining talent with experience and maturity. 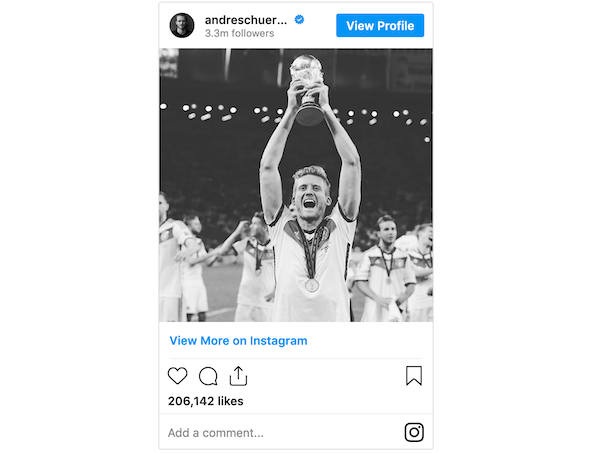 For Schürrle -- capped 57 times for Germany (22 goals), and who supplied the cross that his close friend Mario Götze controlled and converted to give his country the 2014 World Cup title deep into overtime against Argentina -- his job had become a lonely one, farmed out by Borussia Dortmund over the past two seasons to Fulham and then to Spartak Moscow. Injuries and loss of form meant that he'd reached the point "where the lows became lower and the highlights increasingly rare."

The world of soccer, Schürrle added, didn't always allow him to show his true feelings because "you always have to play a certain role to survive in this business." That's arguably true of most jobs -- it's generally termed as professionalism. But that doesn't necessarily mean that it's a good thing for an individual's mental health. Those burdened with fame have to be extra careful about what they do and say, and the straitjacket of expectations -- imposed by both the public and the employer -- can wear the most talented performers down, no matter how much they're earning.

Eintracht Frankfurt's Austrian defender Martin Hinteregger complained two years ago, while still a player at FC Augsburg, that "as a soccer player, you're not allowed to be yourself. You're not allowed to say what you think, instead you say what you have to." This, he said, was all down to the game having changed due to exploding wages and transfer fees, and the growth of commercialism and media hype.

Hinteregger later managed to engineer himself a loan move to Frankfurt out of Augsburg by indeed saying exactly what he thought of his coach at the time, Manuel Baum. Clever move -- he must have known that his honesty would be more than the club would tolerate. When the loan deal expired in the summer of 2019 and he was compelled to return to Augsburg, Hinteregger went out on the town and got drunk with some mates, and didn't care who saw him. Suddenly a permanent move to Frankfurt was back on the table. In fact, Hinteregger's display of his real nature did him and his career no harm at all. The fans love his authenticity and, of course, his unapologetic desire to have a beer or two.

Interviews with soccer players can be a tough read if you're searching for insight into either their minds or the way they view the game. This is not always because they're being coaxed by their clubs to play a role, but simply because they don't have much to say. Maybe, though, clubs are missing a trick here and, instead of always controlling the message, they should let us see players for who they really are -- actual human beings with faults and all.

As Hinteregger points out, though, there are too many commercial considerations for that to happen. It's not necessarily that important for a club if their player doesn't connect with the beer-drinking locals. The PR and communications department's agenda may be much more focused on how a player cultivates an image with, say, the team's growing Asian fan base. Besides that, a wealthy player's idea of being himself may not correspond to Hinteregger's down-to-earth downing of a few Pilsner. It's just as likely to end up projecting an elite picture of Franck Ribery, for example, highlighting on social media how much he's enjoying a $1,000 gold-leafed steak.

Almost every discussion of soccer's problems comes back to the issue of money. Another player retiring this month, the 33-year-old former Manchester City midfielder Gelson Fernandes (67 caps for Switzerland), told kicker magazine that a lot of young players are busy posting stuff on Instagram and think they're something before they've achieved anything at all. "We're losing too many players right now through the system, they're just becoming average," Fernandes claimed. Because they are earning way too much too soon, "I don't see this hunger in many players to improve, to fulfill their dreams, to play for their national teams, to play in World Cups and European Championships and to win the Champions League."

Here's a suggestion for how clubs could treat young players: slash their wages (or at least withhold them in a fund until they're older) and try to let them lead less controlled lives, while providing a support network of professional advisers rather than avaricious agents and mediocre PR goons obsessed with a fake image created through social media. Remove them from that phony spotlight and allow the players to be themselves, to be responsible for their own decisions, and to have to struggle more for success.

"For too long I only defined myself through soccer," current Hertha Berlin coach Bruno Labbadia said last summer when asked what he would be doing with himself after leaving VfL Wolfsburg. "I had to really learn to live more and enjoy normal things." In other words, like Schürrle and Hinteregger, he'd always just wanted a little more time and space to be himself.