Pochettino to Atlanta? Or has Bob Bradley proved the new coach doesn't have to be Latino?

A year and a half ago, when Atlanta announced, with much self-congratulation, that it had signed Frank De Boer  as the coach to replace Tata Martino, I called the appointment a “betrayal.”

I also found it impossible to swallow the words of Atlanta’s English president Darren Eales as he so ecstatically sang the praises of De Boer as “someone who fit all of our criteria. In addition to meeting our club’s core values, Frank’s philosophical views for how to play unequivocally aligns with ours.” I defined that as piffle.

Because, more than just suspecting a colossal blunder, I

Yes, De Boer takes a lot of the blame, but certainly not all of it. In early 2014 Eales, then Director of Football Administration at London’s Tottenham Hotspur, figured in the hiring of the Argentine Mauricio Pochettino as Spurs’ new coach. The appointment had been narrowed down to just two candidates - Pochettino and ... Frank De Boer. Pochettino got the job, but Eales had been impressed by De Boer. Eales moved to Atlanta later that year, and in 2018 found himself in another coach quest. This time, with Eales’ backing, De Boer got the job.

An appointment that almost defies belief. Quite aside from his total unsuitability for coaching Latin players there was the unavoidably horrendous news that de Boer had been a resounding flop in his two most recent coaching jobs at Inter Milan, where he lasted but three months, and in England, where Crystal Palace could put up with him for only two and a half months.

Those deafening warning signals were blithely ignored by Eales at Atlanta. Enter De Boer. And now, exit de Boer. Eales, of course, remains, and he is actually in a position to go some way to repairing the damage that De Boer has inflicted.

Pochettino is out of work. Fired by Spurs after five largely successful years, and an impressive 54% winning record. So, how about it, Darren? Pochettino for Atlanta United? A long shot, for sure. Pochettino is reportedly a candidate to take over at Juventus, which would put him in the $12 million-a-year salary range. Maybe out of Atlanta’s reach, but surely worth a try.

Anyway, a try would be good news, because it would reveal that Eales and Atlanta were getting their thinking straight. A Latin American coach is required -- someone with the pulse of the Latin game in his blood, someone with the vital South American connections that Tata Martino could so quickly and effectively call into action when he was building Atlanta’s initial squad.

Someone who would -- please! -- allow Pity Martinez and Ezequiel Barco to sparkle, would get them playing with the brio that tells you they are enjoying themselves. 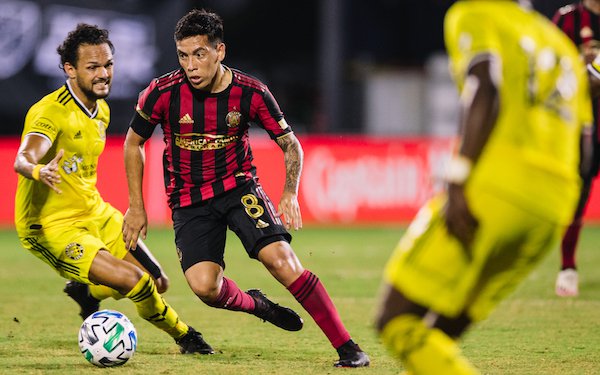 But ... this being soccer, where nothing is ever quite what it seems, I need to point out that the most attractive and exciting team in MLS at the moment is Los Angeles FC. Stocked with Latino talent, led by two standout players, Mexican Carlos Vela and Uruguayan Diego Rossi. And, in Bob Bradley, a coach who flat-out contradicts just about everything I’ve been saying about the necessity of a Latino coach.

I’ve followed Bradley’s coaching career pretty closely. I found his MLS teams -- including the Chicago Fire and the Red Bulls -- workmanlike and unimaginative. His version of the men’s national team rarely excited me. I crossed swords with him a number of times, particularly over what I saw as his shunning of Latin players.

Bradley did a brave thing, went out into the soccer world, sold himself as a coach in very foreign lands, in Scandinavia, in Egypt -- and how easy can that have been? Since when has a soccer coach from the USA been considered a valuable item? And he’s returned to the USA to give MLS a marvelous team that is Latin-based and bristling with skill and artistry.

My, how things have changed. Never would I have expected to see Bradley in charge of a Latin-style team. I got that wrong, didn’t I ever.

So it is just possible that Atlanta could find a non-Latino coach to re-invigorate their Latino style. But I wouldn’t want to bet on it. There cannot be many Bob Bradleys around. He’s proved himself a pretty remarkable sort of coach.

atlanta united, mls
19 comments about "Pochettino to Atlanta? Or has Bob Bradley proved the new coach doesn't have to be Latino?".
Read more comments >
Next story loading