Coaches instigate brutal foul play, and get away with it too

It's just over four years since I turned off the television half an hour into the final of the 2016 European Championship between Portugal and France in the Stade de Denis in Paris. I'd been watching the tournament closely for a month, and had even been to three games in person, but I couldn't stomach a single minute more. French midfielder Dimitri Payet had just kicked Cristiano Ronaldo out of the game and the Portuguese weren't even compensated with a free kick for the midfielder's brutal challenge.

The foul that English referee Mark Clattenburg inexplicably overlooked took place in the game's eighth minute. Ronaldo received a pass and was turning to lay it off, almost static, when Payet came deliberately and tardily crashing into his knee from the side. Though Ronaldo twice tried to resume after treatment, the player most likely to set the final alight was eventually replaced after 25 minutes.

I would be extremely surprised if Payet was not acting under instructions from his coach, Didier Deschamps -- a dour, defensive midfielder throughout his career whose highest accolade was to be labeled a 'water-carrier.' Make your first challenge on Ronaldo a hard one. See if you can soften him up for the rest of the game. It's not as if Ronaldo was in a dangerous position at the time. Although that too would have been no excuse for the challenge.

Payet could not have complained about a straight red card for the foul. According to reports, what followed was -- and this is one of the reasons I turned off -- a dire and turgid match eventually decided by a single goal in overtime. I was pleased when I found out that Portugal had won. I was also furious (and actually still am) that such a cynical and successful attempt to injure one of the two most exciting soccer players in the world, in a showcase final, passed almost without comment in the media. Just one of those things that happen in soccer.

Why am I bringing this up now? Because on Friday night, back in the Stade de France, there was a similar incident in the French Cup Final. Rustic St. Etienne defender Loic Perrin marked the end of his career by taking out Paris St. Germain's dynamic forward Kylian Mbappé less than half an hour into the game. Unlike the ineffective Clattenburg, referee Amaury Delerue couldn't help but spot this vicious challenge and -- after a huge on-field fight between the players of both teams, followed by a video review -- showed Perrin a straight red card. 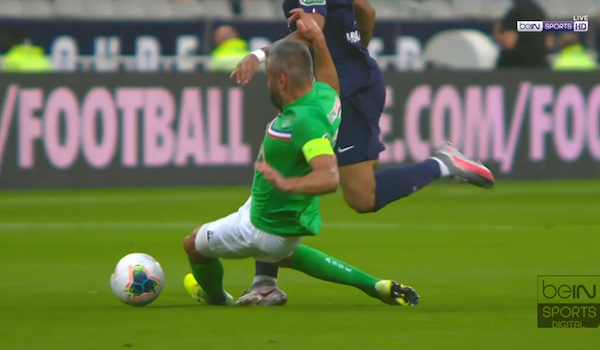 PSG coach Thomas Tuchel pointed out after the game that this was the third time they'd played St. Etienne this season, and the third time that their opponents had received a red card within the game's first half hour. In the first two games, the final results are significant. In the league St. Etienne lost at home 0-4. In the League Cup quarterfinal, PSG won 6-1. So, intimidatory and borderline violent tactics in the game's opening phase didn't work. Yet St. Etienne, coached by Claude Puel -- a man with a 20-year touchline career record notable for negativity over spoils -- opted to try them a third time, this time narrowly losing 1-0. Mbappé joined in the post-game celebrations on crutches, and is doubtful for the remainder of PSG's Champions League campaign next month.

You could ask what a financially limited team like St. Etienne is to do against an oligarch-backed, star-packed hot favorite like PSG. It's true that the odds are stacked against them, and the only way to pinch a result is likely to be through a combination of strong defense, a lucky goal on the break, and a certain amount of physical play, combined with the hope that the Parisians might have an off-day. What they should certainly not do is resort to out-and-out brutal foul play. It's not just that it doesn't work -- even with a hopelessly lenient ref like Clattenburg. It's also morally wrong.

There's little to legislate against it, though, aside from the Laws of the Game. Even if these are properly applied, as they have been against St. Etienne this season, there's no punishment beyond a red card and a suspension (irrelevant in the case of the retiring Perrin). Coaches dictating such tactics will get clean away with whispering euphemistic instructions into the ears of their henchmen. They are more than likely to receive praise from the self-styled experts in the co-commentary position for 'smart' tactics. The coach's job is to win trophies, not garlands for pretty play!

The Bundesliga's Fair Play standings for the 2019-20 season has just been published. Cards issued to coaches were not included. Why not? Surely they are the ones most responsible for foul and dirty play. In fact, not only should SC Freiburg coach Christian Streich be the man at his club to personally receive the trophy for his team's first-place finish, but the coaches at the bottom should be hauled before a disciplinary panel to explain themselves. Preferably in public. Question One is a two-parter: Why do you hate soccer, and why are you trying to destroy the game?

referees
11 comments about "Coaches instigate brutal foul play, and get away with it too".
Read more comments >
Next story loading