After enjoying a unique college career – she helped Stanford win a national title and returned to the final four with Georgetown while in graduate school – Kyra Carusa’s professional career has started out quite extraordinarily. 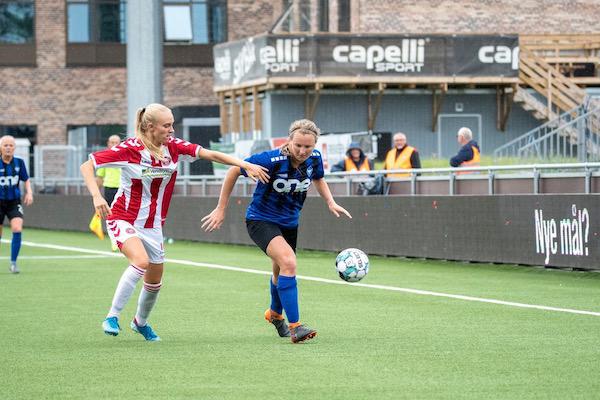 In June, Carusa scored four goals in five wins for HB Køge as it won promotion to the top tier of the Danish league.

“It’s not only special to the players, staff and people in the club administration who do this day in and day out,” said Carusa from Denmark, where she’s getting ready for the Aug. 8 Gjensidige Kvindeliga start. “It's really special to the town and people here. When neighbors see us walking, they say tillykke, tillykke -- which is congratulations in Danish. It's nice to hear that we reach people and that they support us.”

“So many things had to happen to achieve promotion,” Carusa says. “The team accomplished so much to get here, I feel lucky to have partaken in the final promotion step.”

For Carusa, the excellent run in June came after another career milestone – and lots of travel. The San Diego native, whose grandparents hail from Ireland, debuted for Ireland in a 3-0 European Championship qualifying win at Montenegro in March 11. (Ireland is well-poised to qualify for Euro 2022 to be hosted in England.)

The globetrotting started in February when she met up with her new teammates in Køge -- a medieval coastal town of 38,000, a half-hour south of Copenhagen by car – before departing for preseason camp in Malaga, Spain. After a week back in Denmark, she joined the Irish national team in Dublin. Following the game in Budva, Montenegro, plans to settle down in Denmark for the start of the season were interrupted by COVID-19.

On March 13, Denmark began introducing lockdown measures, one of the first European nations to do so. Carusa altered her flights while on layover in Istanbul and returned to San Diego.

“I did a lot in those five weeks abroad, saw a lot of countries, and it was fun,” Carusa said. Then came the holding pattern, waiting for the Danish leaders to OK a return to play.

Denmark has been testing a higher percentage of its population than most nations in the world. A May 26 Financial Times headline read: “First to close — first to reopen: Denmark’s gain from virus response.”

Carusa returned to Køge in May, the 10-game Kvinderliga promotion playoff series having been halved to five games. The first four played were behind closed doors, but 500 fans were allowed into Capelli Sport Stadion to watch the 3-1 win over AaB that iced promotion on June 28. All four Americans started. Carusa scored in the 33rd minute.

“We got tested every week, as did the everyone on the all the other teams to ensure that we were being safe,” Carusa said. “And no one tested positive. Thank goodness.”

She returned to San Diego after the celebrations and in late July flew back to Denmark, which is now “completely functioning” and a stark difference from the USA, she said. 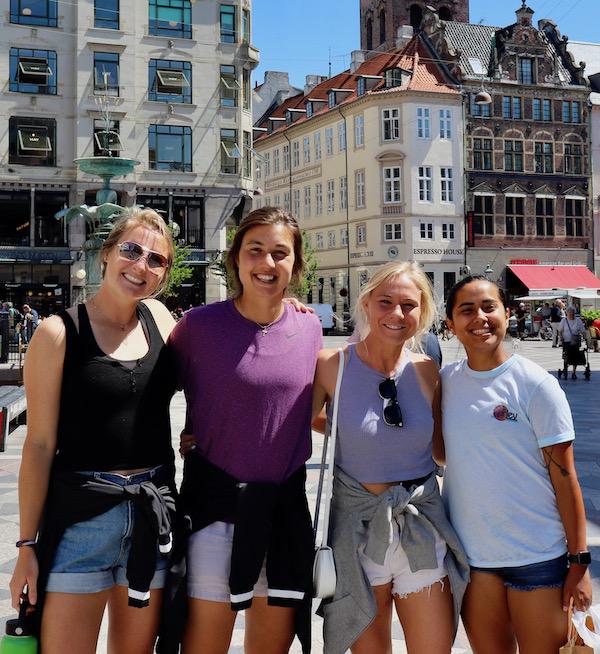 In her youth days, Carusa played for the San Diego Surf and starred at Del Norte High School. An ACL injury forced her to red-shirt her freshman season at Stanford. Carusa's 15 goals in her senior year included the opening strike in Stanford’s 3-2 win over UCLA in the 2017 NCAA Division I final. She graduated with a degree in human biology – but still had a year of eligibility left because of the injury red-shirting.

Carusa wanted to get a master’s degree on the business side to complement her undergraduate degree – and experience a new environment. Hence, she chose Georgetown on the other side of the country. On the field, her goal was to win another national title – and she came close.

Her 10 goals and 12 assists for the Hoyas in the 2018 season included one strike and two setups in a 3-0 quarterfinal win over Baylor that sent the Hoyas into a semifinal against North Carolina. The Tar Heels prevailed, 1-0, in double overtime – handing the Hoyas their first loss of what was the program’s best season.

New Jersey-based Sky Blue FC drafted Carusa in January 2019, but that option – a 200-mile commute -- conflicted with finishing her master’s degree at Georgetown. After graduating, she joined French club Le Havre. By then, the process of getting a Republic of Ireland passport had been underway.

Carusa’s maternal grandparents emigrated from Ireland in the 1950s and she visited the country as a child. “I have lots of cousins in Ireland, plenty of family,” Carusa said. "For my grandmother to be able to watch me play for Ireland -- the kind of honor I feel. Oh, I wish I could describe it."

Her Georgetown coach Dave Nolan encouraged her to pursue the national team opportunity. Nolan, who hails from Ireland, settled in the USA after arriving to play for Seton Hall, where his freshman year coach was compatriot Ed Kelly and he played his final seasons under Manfred Schellscheidt.

“Dave was a huge supporter of my dreams of going abroad,” Carusa says. “He's like: ‘Look, You're Irish, get on this passport thing. Let's make this happen. You could be playing with a national team.’”

Ireland coach Vera Pauw agreed and on March 5 Carusa was in uniform and on the bench at Dublin’s Tallaght Stadium for a 1-0 win over Greece a week before her debut in Budva.

“I didn't even step on the field,” she says. “I was decked out in the gear. It felt like it was 10 degrees. I’m thinking, I could not be wearing more layers now, but I could not be happier.

“When the game ended, my teammates are saying, ‘I think people are screaming for you.’ I turned around and -- I kid you not -- an entire section of the stadium was chanting ‘Kyra.’ An entire extension of my family was there to see me in this jersey. Oh my God!

“I said, 'You guys it’s so cold. What are you doing?' And they're taking pictures of me and they could not be happier. ‘We haven't seen you in so long. And it just feels so special.’

“And in that moment I realized I’m just so lucky. I'm so lucky.”