MLS is Back: Orlando City rewarded for play with upset win over favored LAFC 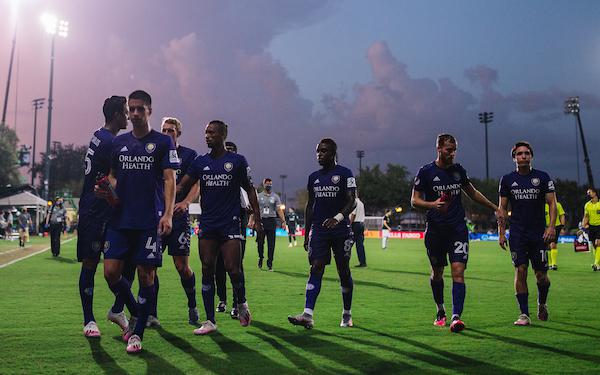 As the clock ticked away on Friday night at the ESPN Wide World of Sports Complex, it looked like hometown Orlando City would finally go down to its first defeat in five games at the MLS is Back Tournament.

The Lions had the better of play against tournament favorite LAFC but was trailing 1-0 when Bradley Wright-Phillips scored in the 60 minutes, three minutes after Portuguese star Nani had his penalty kick stopped by LAFC goalkeeper Kenneth Vermeer.

But Joao Moutinho beat LAFC defender Jordan Harvey to Nani's corner kick and headed home the equalizer in the 90th minute. Orlando City won the shootout with a 5-4 victory when Harvey smashed his shot off the crossbar and Nani, with the 10th attempt, scored this time.

The Lions finished with a 17-8 edge in shots and held LAFC, which entered the game with 15 goals in four tournament games, to five shots on target. Once again, they showed poise on the ball in arguably the biggest game of their six seasons in MLS.

"The game rewarded them," said first-year coach Oscar Pareja, "because they were the best team on the field. They were patient in the difficult moments and I want to highlight that, that’s the heart of the team and the club. We want to share that with our fans and the people who are just starting to believe and the people who have believed in us all the time. We’re ready to move forward, but congratulations to the players.”

The victory was particularly sweet for Moutinho, who was drafted by LAFC with the No. 1 pick in the 2018 SuperDraft after his freshman year at Akron. The Portuguese defender started for the first part of the 2018 season at left back but later lost his job to Harvey and was traded to Orlando City after his first season.

“Obviously, I still have a lot of friends and a lot of people that I respect back there at LAFC," said Moutinho. "I spent a good year there, so I made some friendships and I guess it might have that extra special feeling, but honestly I just feel so happy that I was able to help the team in a situation that we needed."

Moutinho said the game plan was to take the game to LAFC.

“We want to be the protagonists," he said. "It doesn't matter who we are up against. We knew that they had a great team, they have very good forwards and midfielders, but we also knew that we had great energy starting with our frontline pressing them from the get-go."

LAFC did not look comfortable, especially in the first half.

"I think you could see from the start that physically, we weren't at our best tonight," said LAFC coach Bob Bradley. "So it's a lot of games in a short amount of time. We spoke at halftime to see if we could raise the level a little bit.  We did. But it certainly wasn't our sharpest football night, either."

Nonetheless, Bradley said he liked how his players approached the tournament, which ended after five games in 19 days.

"We stepped on the field every game to try to take the initiative in the game and push things," he said, "and you could see that tonight, especially in the first half, it's rare for us to have a half where we don't even get a shot. On that end, it was hard and I thought we could still get through and have a little bit of time to recover for the next match, but unfortunately a late goal and then we lose it on penalties."

mls
4 comments about "MLS is Back: Orlando City rewarded for play with upset win over favored LAFC".
Read more comments >
Next story loading