MLS is Back: Diego Valeri and Sebastian Blanco come through again for Timbers 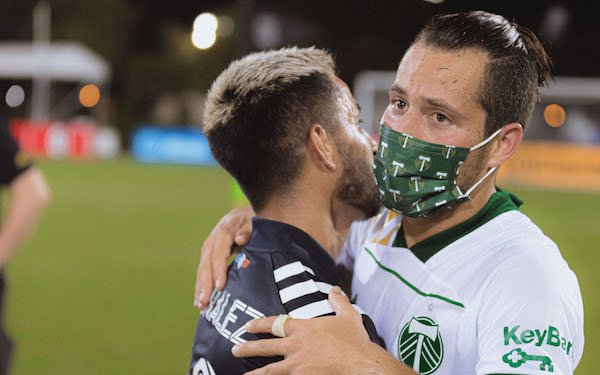 The knock on the Portland Timbers is that they are an aging team.

Diego Valeri and Diego Chara, holdovers from the 2015 MLS championship team, are 34, and Sebastian Blanco is 32.

After the Timbers labored to defeat FC Cincinnati in a shootout in the round of 16, Portland coach Giovanni Savarese made an adjustment for Saturday's quarterfinal match against New York City FC at the MLS is Back Tournament.

Valeri, whose new contract does not accord his Designated Player status, started the game on the bench. But the Argentine was brought on at the start of the second half and scored the winning goal as the Timbers rallied for a 3-1 win.

Blanco had tied the game late in the first half with his second goal of the tournament and he assisted on Andy Polo's insurance goal. The Argentine registered an assist for a fifth consecutive match to give him five and a share for the tournament lead with Toronto FC’s Alejandro Pozuelo. His seven combined goals and assists are the second-most in the competition behind only LAFC’s Diego Rossi with eight.

Savarese said the heavy schedule at MLS is Back dictated the decision to sit Valeri.

"Remember, we didn’t have that much time to be able to recover," he said. "Only three days from last match, so we had to be smart in the way we went about this match. Everyone really contributed to make sure that we got a great win. Diego came right there at halftime. It was something that we planned. He came in and did an unbelievable job. He was fresh, was able to find good pockets, created opportunities and was fantastic, like Polo, like all the players today played at top level.”

Savarese said Blanco has been outstanding throughout the tournament for the Timbers, who are 3-0-2 in five games played over 20 days.

"We know what we have in him," he said. "He shows that every single practice, every single day when he’s with us. This year his mind is clear. He’s doing an excellent job and unique players like him, and others, like Polo and everybody that we have that can make a difference when they’re playing."

mls
1 comment about "MLS is Back: Diego Valeri and Sebastian Blanco come through again for Timbers".
Next story loading