MLS is Back: Minnesota United's domination over San Jose continues 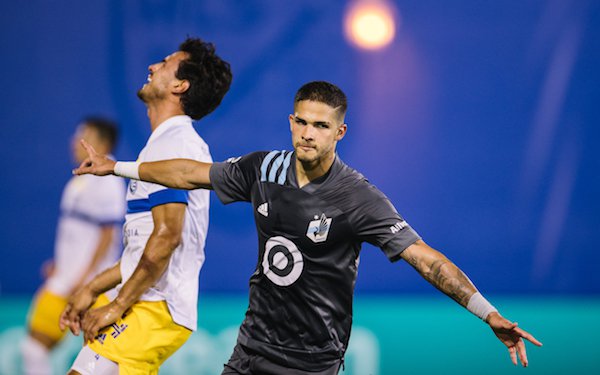 Minnesota United moved into the semifinals of the MLS is Back Tournament with a 4-1 win over San Jose.

The win was the fourth in four games for the Lions against the Quakes, including a 5-2 win on the second weekend of the 2020 season before play was shut down.

Two goals in two minutes in the first half turned the game in Minnesota United's favor. The first in the 20th minute when defender Jose Aja headed Hassani Dotson's cross across the goal to Robin Lod for his second goal in as many games. Then Jacori Hayes pounced on a loose ball after San Jose keeper Daniel Vega failed to control it following a shot from Dotson.

A penalty kick by Magnus Eriksson gave San Jose life early in the second half, but goals by Luis Amarilla and Marlon Hairston sealed the win and a semifinal date with Orlando City, Minnesota United coach Adrian Heath's former club.

It was a dominant performance by Minnesota United, which finished with a 13-4 edge in shots on target.

"I’ve probably got more faith in this group than anybody else," Heath said. "Certainly, more than you, the press, and the people everywhere else who continually seem to think we struggle to get through."

Given their opportunities on the break, the Minnesota United coach said the Loons should have had more than four goals -- and they needed every one against the Quakes.

"Even tonight, you know that they’re never giving in," he said. "They keep going. And at 3-1, I’m looking at the clock and I’m going, this is still not over yet. Because the one thing that is instilled in the group is a belief in what they do. So, yeah, it looks as if a comfortable win if people haven’t watched the game. Anyone who has watched the game would say it’s far from comfortable.”