A few months ago, Julio Serrano  was settling in as the new chair of United Soccer Coaches’ Latino coaches’ advocacy group. His goal was to unite and provide resources to the 1,200 or so self-identified members of the organization – from a variety of backgrounds, coaching at a broad range of schools and clubs – while advocating for Latino coaches’ needs, and raising their profile in what may be the largest coaches’ group in the world. 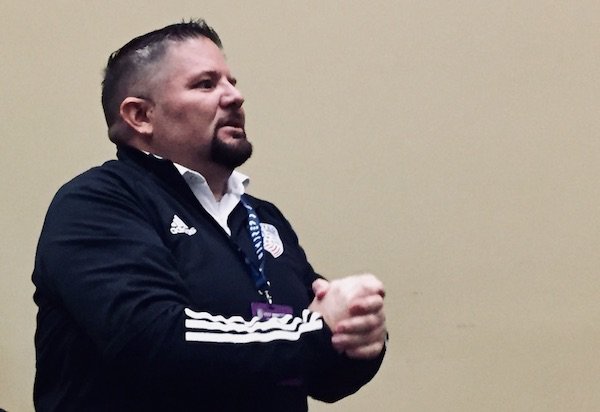 Then COVID-19 struck. Though nearly every member of United Soccer Coaches was affected in some way by the virus, Latino coaches were hit especially hard.

A survey revealed many concerns. On the coaching and administrative side, respondents worried about how to reach their players, pay for facilities and club salaries – and even whether they would still have jobs. Personally, they feared for their own finances and housing.

“Lots of Latinos are not full-time coaches,” Serrano – who coached club and high school soccer in Northern California, before moving to Illinois where he works at the state and club levels – explains. “They have day jobs in places that don’t offer healthcare.” Those who are high school or college coaches may be part-time, without benefits.

The timing of the coronavirus meant that some teams were just beginning their now-canceled spring seasons. Registration fees that already been paid were now needed by families to survive. Serrano knows of several clubs that refunded money, but then had to forgo payments to coaches. Tight-knit soccer clubs that are the cornerstones of some Latino communities were ravaged by the pandemic. One New Jersey club lost 20 people – including parents and siblings – to the disease. At the same time, Serrano says, restrictions on gatherings and games meant that coaches could not meet their young players, or help them grieve.

“In the first month or two, everyone was just trying to get their bearings,” he notes. For some members of the Latino coaches’ advocacy group, that meant finding ways to connect with youngsters who lacked internet access, or devices to log on. “Some of the things other coaches and clubs take for granted – Zoom calls with beautiful logos in the background – were hard for our coaches to do,” he says.

Immigration issues loom large as well. “The reason there are so many unaffiliated (Latino) teams, clubs and leagues is that maybe some children or families don’t have (legal immigration) status. There’s a fear of giving documents to organizations they perceive may be affiliated with the government.” One consequence: Resources (including funding) that larger sports groups may have for members have been unavailable to unaffiliated players.

Coaches with H-1B “specialty work” visas face their own difficulties, when club contracts were canceled due to COVID. They have 60 days to find a new sponsor for their visas. Those who cannot do so may have to return to their home countries – but some may not welcome them back. The virus is now surging in some areas of Latin America.

Requests for help – individually, and for teams and clubs – continue. “Our leadership team still gets two or three emails a day. We hear all kinds of grim situations,” says Serrano. They’ve put together a Spanish-language list of resources, and share it with people far beyond the Latino coaches’ advocacy group. “Everyone should sit at the table,” the chair says. “We are all in this together.”

He speaks passionately of his members’ needs. But the COVID crisis affected him personally too. In March, Serrano was in the midst of changing coaching jobs.

Throughout April and May, he lacked health coverage. “I was scared to death,” he admits. “If anyone in my family got sick, how could I help them?” He is receiving food stamps now, so he knows exactly how some fellow coaches feel.

He praises his own advocacy group. “Without their help, and without having this work that I do, I might have lost my mind,” Serrano says. “Latinos don’t like asking for things. But if we need it, we should not be afraid or ashamed of asking for help.”

As the country – including soccer – slowly reopens, he allows himself some optimism. “The veil has been lifted. This is an exciting time. We can live with dignity. We can’t be fearful.”

And, he notes, as bad as COVID has been, there is a silver lining. The disease has helped unify the Latino coaches’ advocacy group. They are taking action. They are helping each other. They are becoming united soccer coaches.