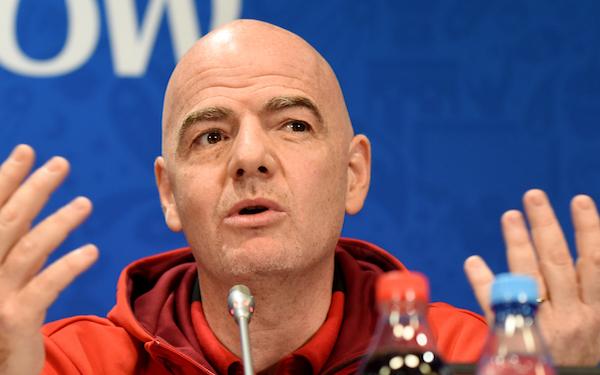 Swiss Supreme Court president Stefan Keller was appointed the special prosecutor in July and is investigating charges of abuse of public office, breach of official secrecy, assisting offenders and incitement to these acts, according to the Swiss watchdog agency overseeing the Swiss attorney general's office.

The probe began after two complaints were made against Infantino, Lauber and Arnold. Keller is seeking parliamentary approval to have Lauber’s immunity from prosecution be lifted so he could be investigated.

In a statement to the Associated Press, FIFA said: “There is nothing preventing the president from performing his duties. He will continue to fully assume his functions within FIFA.”

In October 2015, FIFA president Sepp Blatter and Michel Platini, then UEFA president and Infantino's boss, were suspended by FIFA's Ethics Committee for 90 days after the same Swiss attorney general’s office that is investigating Infantino, Lauber and Arnold opened an investigation into Blatter and Platini over FIFA payments made to Platini.

In December 2015, the Ethics Committee banned both Blatter and Platini from soccer for eight years, removing them from their positions, killing Platini's bid to succeed the embattled Blatter and opening the door, as it turned out, for Infantino's election in February 2016. (Almost five years later, the Swiss attorney general’s office investigation into Blatter and Platini is still ongoing.)

Infantino's position has been that it was “perfectly legitimate and perfectly legal” to meet the Swiss attorney general and "not a violation of anything." FIFA: "FIFA is convinced that at the end of the current investigations it will be confirmed that the FIFA president didn’t do anything wrong by performing his fiduciary duties and meeting the attorney general of Switzerland."