MLS is Back: Portland Timbers get job done -- they get to go home with a trophy 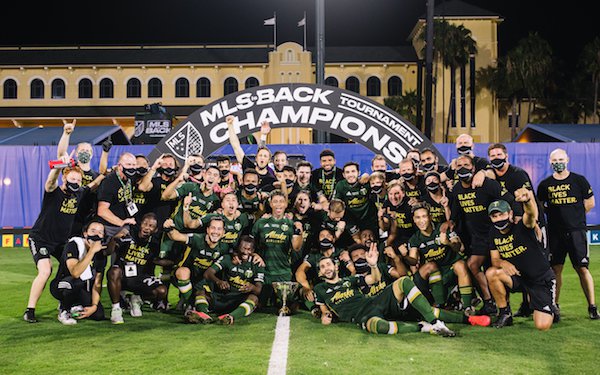 The MLS is Back Tournament is not MLS Cup or the Supporters' Shield or U.S. Open Cup or Concacaf Champions League, which MLS teams compete for each year.

But winning the MLS is Back Tournament is not without its rewards.

The Timbers earned something else. After 39 days in the bubble, they get to go home.

“We just told ourselves we need to make it worth it," said center back Larrys Mabiala.

The Congolese defender was one of the unlikely heroes of Tuesday's night's final. He scored the first goal for Portland with a diving header off a Diego Valeri free kick in the 27th minute.

Orlando City equalized on a goal by Mauricio Pereyra 12 minutes later, but the Timbers went ahead for good midway through the second half off another set piece.

Orlando City failed to clear a Valeri corner kick, and Eryk Williamson played it back into the penalty area, where Jeremy Ebobisse re-directed the ball to Dario Zuparic, another center back, who slotted it past Orlando keeper Pedro Gallese.

Only once before have two Portland center backs scored in the same game. Nat Borchers and Liam Ridgewell scored in the first leg of the 2015 Western Conference final during the Timbers' run to their first MLS title.

"In the quarantine," said Mabiala, one of six starters who are holdovers from the team that fell to Atlanta United in MLS Cup 2018, "we’ve been talking a lot about what we wanted to accomplish and how we wanted to play. Obviously, we wanted to play better today, but at the end of the day you don’t play finals, you’re just winning, and we’ll just remember the winner of this MLS Is Back tournament.”

Mabiala said the Timbers told themselves they weren't going to be away from home for so long without returning with a trophy.

“Personally, I have three kids and two toddlers, and the last 10 days have been very hard," he said, "because I had my son calling me every morning crying, asking me when I was going to come back, so it’s been tough. When we had these conversations, we just told ourselves we need to make it worth it, we don’t want to go back to our houses without a trophy. That was the most important thing to us, and we’re just happy to have the job done.”

mls
3 comments about "MLS is Back: Portland Timbers get job done -- they get to go home with a trophy".
Read more comments >
Next story loading