Reggie Cannon disgusted by booing: 'I even knew when we decided to kneel that it was going to happen' 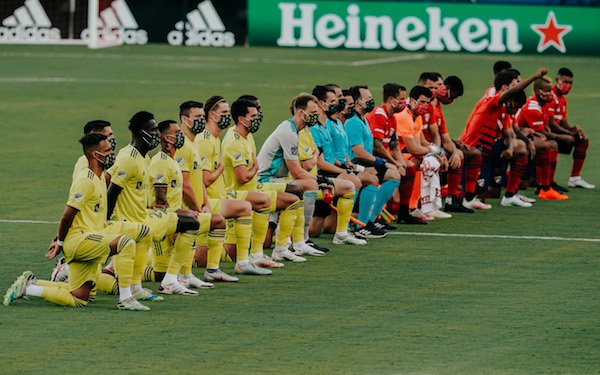 More than five months after MLS play was shut down and a month after it was removed from the MLS is Back Tournament following more than a dozen positive cases of COVID-19 to players and staff in its traveling party, FC Dallas returned to the field in Wednesday.

FC Dallas even opened Toyota Stadium to fans for its match against Nashville SC. Texas Governor Greg Abbott's most recent executive order governing open-air sporting events limits fans to 50 percent of capacity. FC Dallas limited capacity to 5,110 fans, or about 26 percent of capacity, then reduced the number to 3,000 on Wednesday morning.

FC Dallas and Nashville SC players and the refereeing crew knelt while the national anthem was played. There were some boos in the announced attendance was 2,192, and one fan was reportedly removed from the stadium for throwing a water bottle at the players.

"I think it was disgusting," said FC Dallas right back Reggie Cannon, who plays for the U.S. national team, following the 1-0 loss. "I think it was absolutely disgusting. You got fans booing you for people taking a stand for what they believe in and millions of other people support this cause. We discussed with every other team and the league what we are going to do and we got fans booing us in our own stadium. How disgraceful is that? For a lack of a better word, it pissed me off. We discussed it prior with what we are doing, we discussed it with Nashville. Everyone from Nashville was on board, everyone across the league was on board on what we were going to do. We asked for no anthem because we didn't feel it was right for the anthem to be played at this moment. They ignored our wishes so we were gonna kneel regardless. If the anthem was going to be played or not. Unfortunately, it was played during these times when we asked for the anthem not to be played."

Cannon said he and his teammates had been waiting to get a chance to play again after what happened at MLS is Back.

"You can't even have support from your own fans in your own stadium," he said. "It's baffling to me. As a team, we try to give the best possible product on the field and these last six months have been absolute s*** for us. Absolute s***. We have to watch other people play soccer, and we're just sitting home unfortunately contracting COVID from the unfortunate situations that we were put in. Now an opportunity presented itself to play tonight, and unfortunately we're mad and upset not to get the win, but I was pissed. Everyone around me was pissed. Ryan Hollingshead, the first thing he said to me after we got up from the knee was 'I'm sorry, I'm sorry for our fans'. We had someone chanting 'USA' when they don't understand what kneeling means. They don't understand why we are kneeling. They can't see the reason, they just think we're the ignorant one."

Cannon said he was hurt by the boos.

"It's incredibly frustrating," he added. "I'm sorry for having this tone but you have to call it for what it is. I even knew when we decided to kneel that it was going to happen. That sound tell you guys something: I knew that we were going to have negative push-pack from having a unified response over what's going on. It hurts me because I love our fans, I love this club. I want to see the support that the league has given us from our fans. I love the people that came out tonight but as soon as I heard that boo I just had to play on and knew what to expect. We will take it one day at a time. Again, we are unified in this response and everyone stand together: black, white, even orange. Everyone stands together."

black lives matter, coronavirus, mls
70 comments about "Reggie Cannon disgusted by booing: 'I even knew when we decided to kneel that it was going to happen'".
Read more comments >
Next story loading