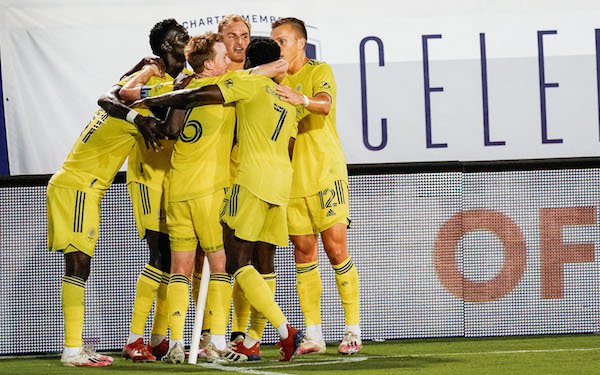 A day after the MLS is Back Tournament wrapped up in Florida, league play resumed in home markets.

In the first of three games they will need to play to make up for the three group matches they missed at MLS is Back when they were removed from the tournament because of COVID-19 outbreaks on both teams, FC Dallas and Nashville SC met on Wednesday night at Toyota Stadium.

Both teams had not played for more than five months, and the layoffs showed. Nashville SC got a late goal from David Accam and picked up its first MLS win and first MLS points with a 1-0 victory.

The shadow of COVID-19 hung over the match, however.

Assistant coach Steve Guppy was in charge of Nashville SC after head coach Gary Smith initially tested positive for COVID-19. His two subsequent tests were negative but the results of the second one came too late for him to make the Nashville SC charter flight to Dallas.

Guppy said Nashville SC's celebration was understandable, given everything the team has been through.

“Well, it is one game," he said afterwards, "but please forgive us for maybe enjoying it more than we would normally. It’s our first win, it’s away from home, we had the disappointment of what went on at Disney with a lot of players in isolation forever. It felt like we were in Shawshank down there."

Guppy credited Smith for his work during and since Nashville SC's quarantine at MLS is Back, where it never even practiced before being kicked out of the tournament five days after its arrival.

"It’s been a difficult road for everyone," he said, "but they stuck at it and Gary has done a marvelous job of keeping everyone closer together. When you look at all these things together, tonight, away from home in the heat, flying during the day, all these things players aren’t used to. It’s our first game in five months, to hang in there and to get a win in the manner we did, hats off to the players.”