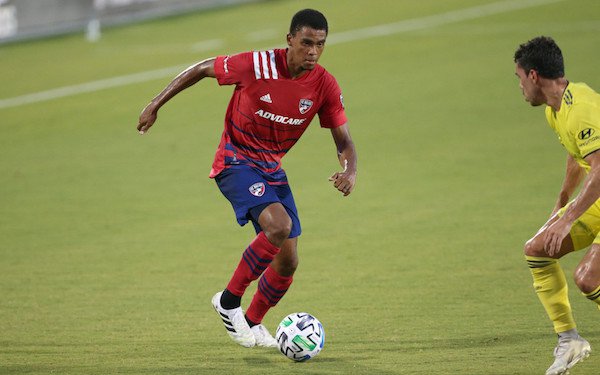 Reaction to the booing of FC Dallas and Nashville SC players by some fans for their kneeling during the playing of the national anthem before Wednesday's game at Toyota Stadium continued on Thursday.

After the game, FC Dallas right back Reggie Cannon, a starter on the U.S. national team, said the booing was "disgusting," and he and his teammates knew they were going to have negative push-pack from having a unified response in support of the Black Lives Matter movement and MLS's Black Players for Change, which organized protests during the MLS is Back Tournament in Florida.

On Thursday, FC Dallas owners Dan and Clark Hunt said Cannon received "racist comments and death threats" and Cannon made his tweets protected. MLS commissioner Don Garber said some of the comments made on social media after the match were "appalling."

In a media call with reporters, Philadelphia Union defender Mark McKenzie, who plays with Cannon on the U.S. national team and is also a member of Black Players for Change, said, “It goes to show how much work there has to be done. I believe somebody said this kneeling is becoming overkill right now. You know, that sums it up in a nutshell. The injustices and systemic racism, I think that’s the overkill. It’s disheartening, it’s frustrating to see."

McKenzie added, "It’s an eye-opener, it just goes to show how much work there is to be done. It’s not going to stop any of us from taking a stand, continuing to push for equality and equity. Ultimately, we have a platform to play football and influence change, shape the next generation to be better than we we were. Reggie has the support of players around the league, around the world, and I’m fully behind him.”

FC Dallas issued an unsigned statement early in the afternoon that "it supports our players and fans in their right to express themselves in a peaceful manner. The national anthem was played before last night’s match while the players were on the field which Major League Soccer requires when fans are in attendance. While we understand the decision to stand or kneel for the national anthem is a polarizing issue, we hope that FC Dallas can be a leader in helping our community accept diverse viewpoints in a respectful way as we all work together in the ongoing fight for racial equality."

With the return to play in home markets, MLS's policy is to only hold pregame ceremonies and play the national anthem at matches where fans are in attendance. FC Dallas is one of only a few MLS teams that plan on having fans in the stands. A Dallas crowd of less than 3,000 was on hand for the 1-0 loss to Nashville SC. 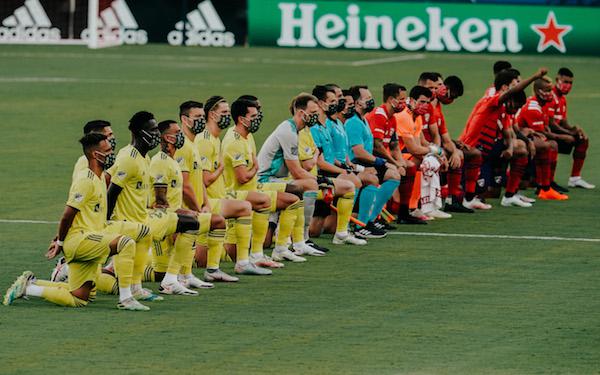 ESPN FC reported, citing a source with knowledge of the situation, that FC Dallas had asked MLS for permission to not play the anthem, a request the league declined. Since 2017, MLS's position is to respect and support the right of players to express their personal beliefs during the playing of the national anthem.

In his statement, Garber reiterated that Major League Soccer "supports players and staff who protest peacefully on behalf of equality and social justice" and the league "will not tolerate any abuse or threats" to them.

Later in the day, FC Dallas issued a second statement, this time from the Hunts:

“We want to be clear: We love and support Reggie Cannon. The racist comments and death threats he has received are repulsive and unacceptable. There is no place in our sport, or in our country for that matter, for the kind of horrific vitriol Reggie has had to endure today. Hateful or violent threats are never warranted — especially when they are directed toward a member of our FC Dallas family. We will continue to work together — with our players, our coaches and our fans — against racism and in the cause of equality for all.”