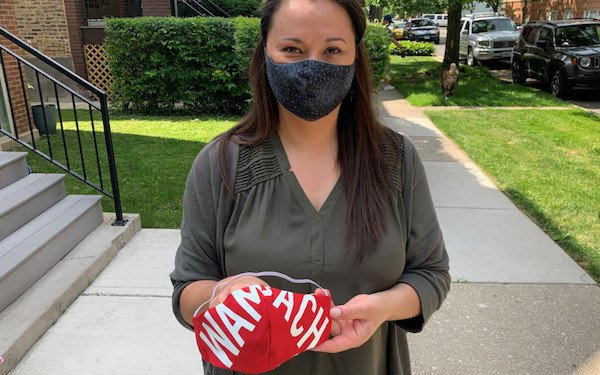 The heroes in the fight to contain the coronavirus are the frontline workers.

Then there are those who help our heroes. You will find no one more caring, more talented or more impactful than Melizabeth Santos.

You've probably never heard of the Chicago resident. Santos is a mother -- more on her children in a bit -- and a teacher -- she works in the Chicago public school system, teaching ESL (English as a Second Language) teachers. She also happens to love sewing and soccer, and she put those passions together to make masks out of old U.S. national team jerseys laying around storage at U.S. Soccer House in Chicago.

As a child, Santos was introduced to sewing by her grandmother, who looked after her while her mother worked. Later, to fulfill a work-study requirement at Millikin University, where she did her undergraduate work, she entered the theater program and made costumes.

"I worked on the team making costumes," she says, "and they taught me how to make patterns and create original things without going to the store and buying my own patterns. It was a really useful skill that I picked up."

"It's usually been for my family, for my home, for gifts," she says. "I do a lot of homemade gifts. Especially when my friends would have their own children. I would make something for them. The most fun that I have sewing is during Halloween. We always come up with some elaborate costume plan that involves everything made from scratch. It's a lot of fun and my family has a lot of fun coming up with the idea and executing it. And you get candy at the end!"

Santos says her last big project before the pandemic was making her wedding dress with her mother.

"I started making masks when the factories were closed," she says. "I follow a lot of sewing communities on social media and I saw that people were making masks and donating masks to hospitals, but a lot of the hospitals in Illinois were still at the point where they were not taking them. They were not going to be medical grade.

"I started making them for my family, A friend that's a nurse called me and said, 'Can you make me some?' I made some for my cousin, who's a police officer. Anybody I could think of that was not able to stay home. And then from there I still had some fabrics, so I started making some for sale and I put them up on Etsy. I opened an Etsy shop and I started selling there, and that's where the U.S. Soccer Federation found me, asked me if I wanted to help them out with this project. I was very happy to do that."

Soccer is big in Santos' family, so she understand the power soccer could have passing along the message about the importance of wearing a mask, especially to young people.

"My mother and my father are both from Mexico," she says. "Soccer is very essential to Latino culture. And if there was a big game on, especially when Mexico played, it became a family event. We would go to somebody's house and put it on the screen and get together, make it into a good reason for a cook-out.

"My dad's birthday is in late August, and we would buy tickets to the Chicago Fire and take him and my uncle and whoever wanted to go in the family. And that would be a big outing for us. And we would go to Soldier Field to see Mexico when it plays here in the United States. It's always a good time. It's a common denominator in our family. Everybody appreciates being at a soccer game."

Santos usually spends about 3-4 hours a day sewing. She made 500 masks out of national team jerseys in about six weeks and 300 other masks she's sold, both N95 mask covers and full face masks. A limited number of soccer masks came from the USA-Jamaica World Cup qualifier on Oct. 7, 2001, when the USA qualified for the 2002 World Cup. The match came on the day of the invasion of Afghanistan, less than a month after the 9-11 attack, and the masks from that game were embroidered with 9-11-01. 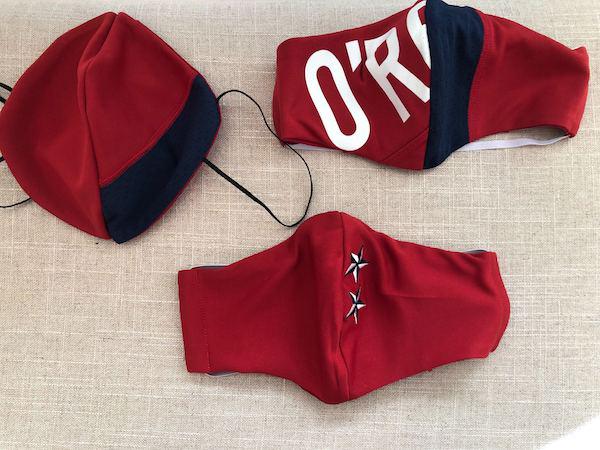 Santos isn't the only talented member of her family. Music is also a big part of her family -- her husband's grandfather, Jose Cruz Alba, started one of the first mariachis in Chicago -- and as a family project her children, Leo and Tere, wrote a song in Spanish she says was intended to "bring a smile to people in these tough times." It's so good that Chicago mayor Lori Lightfoot put the video Leo and Tere created on the mayor's office's social media channels.

"I am a teacher," Santos says, "and there were a lot of pandemic songs, pandemic-themed rewrites. They found them very interesting and very funny. And it's a good social, emotional lesson, too, to rewrite some lyrics about things that are happening and to be able to reflect on it. And we decided to video it, and we sent it to the mayor's office just to see if she might want to view it because she had been mentioned in it, and she liked it. They had so much fun. They were shocked that they got on the mayor's Facebook page." 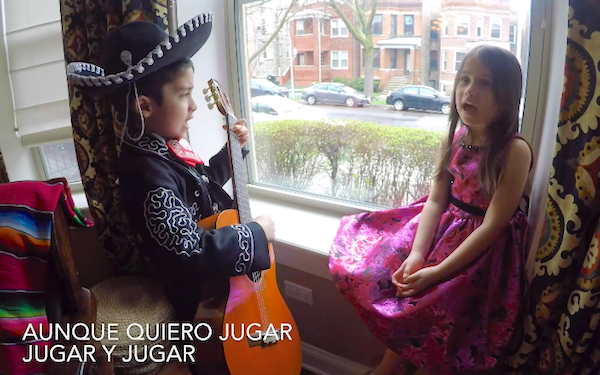 Santos' days are spent preparing for a new school year and looking after Leo and Tere at home. On Wednesday, Lightfoot announced that Chicago schools will reopen remotely on Sept. 8, ditching the hybrid plan of the nation’s third-largest school district to reopen partially in person. It looks like the earliest in-person classes in Chicago will happen is in November.

The challenges of teaching English as a Second Language to young students online are enormous. Santos hopes the COVID situation improves soon so everyone can get back into classrooms, but she says she and her colleagues have learned a lot since they were forced online after Chicago classrooms closed abruptly on March 17.

"I really felt like I got to make more solid instructional connections with the students because it was just me on a computer for 30, 40 minutes at a time," she says. "And there were no distractions. There was nobody else. I did it when the teachers weren't teaching. Maybe after they had done their lessons, I would get together with them then and give them very specific language support. And I kind of felt like I got a lot done well, so there's upsides to it."

It was during one of Santos' virtual meetings on Tuesday that she received the greatest compliment possible for her work as U.S. Soccer's mask-maker.

"I was actually on a meeting with a fellow teacher," Santos says, "when the text message came in, and she will attest to the fact that I screamed, tossed my phone up in the air. I was so excited."

The text message contained two photos -- in one Dr. Anthony Fauci, the director of the National Institute of Allergy and Infectious Diseases, is wearing an Abby Wambach mask and in the other he's wearing a Cobi Jones mask. Dr. Fauci understood right away the significance of the federation's Play On campaign and soccer's ability to reach millions of children, and was thrilled to wear Santos' masks.

"It's a stress relief for me," Santos says of sewing. "It's a project that makes me feel very connected to important women in my life.  I don't intend it to be a career, but I imagine that I am more excited than anybody who would make a dress for someone on a red carpet because I was really starstruck to see that something that has been through my sewing machine at home made it to such an important leader at this important time in our nation's history." 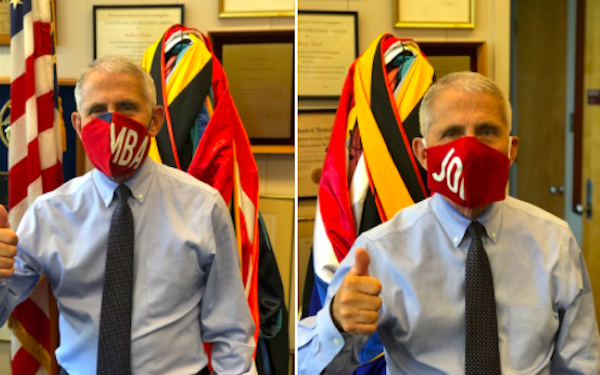 -- Watch YouTube videos or anyone with video tutorials. Don't be ashamed. If you are just learning, they're very helpful. You can rewind them and watch as many times as you need to.

-- Don't be embarrassed to use patterns that are out there and are free. You do have to be careful, though, because some people don't want you to reproduce them if you're going to sell them.

-- Do research on what kind of material you're using for your masks. Some materials might be more fashionable but don't offer the necessary protection. You can always add lining that is efficient at filtering particles. (This New York Times story is particularly helpful about the kind of materials that offer a good level of protection.)