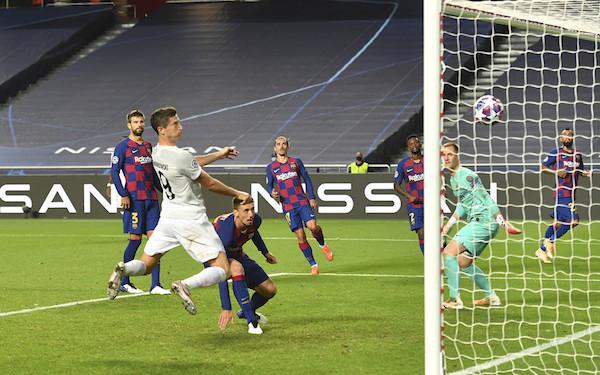 UEFA has already said there will be no repeat of the Final 8 in 2021.

It might be premature to think that the Champions League won't be thrown off course by COVID-19 again next season.

With four games in four days -- four single-elimination games -- the new format produced plenty of drama and surprises, not to mention a flurry of goals (an average of 5.0 a game).

That's been great for American broadcasters Univision and CBS Sports.

Friday afternoon's Bayern Munich-Barcelona game averaged 1.36 million viewers on Univision/TUDN, the most ever for a Champions League quarterfinal on American television.

CBS Sports starts far behind, looking to convert fans to its pay streaming service, but the Final 8 has allowed it to showcase the talented crews it has assembled to present and analyze the games.

Here's a look at the winners and losers of the last four days.

France vs. Germany. Paris St. Germain vs. RB Leipzig on Tuesday and Lyon vs. Bayern Munich on Wednesday. Who would have predicted the semifinals would be two French teams and two German teams?

PSG? Maybe. But Lyon was so bad in the 2019-20 Ligue 1 season with just 11 wins in 28 games that it finished in seventh place when the season was aborted due to the coronavirus pandemic.

Never have two French teams made the final four of the Champions League in the same year. At the national team level, France and Germany is one of Europe's great rivalries, featuring memorable semifinal clashes at the 1982 and 1986 World Cups and Euro 2016.

Lyon academy. Lyon's series win -- via the away goal -- over Italian champion Juventus and its 3-1 victory over mighty Manchester City underscored its ability to develop young talent.

Houssem Aouar and Maxence Caqueret were 11 when they entered OL's youth system, considered one of the best in Europe. Goalkeeper Anthony Lopes, who represents Portugal internationally, was 10.

All three started against Manchester City on Saturday. Lopes was outstanding in goal, while Aouar, arguably the best player on the field, and the 20-year-old Caqueret were excellent in midfield.

Ruthless Bayern. Who is really surprised that Bayern Munich beat Barcelona? In its last 28 games dating back to before Christmas, Bayern has won 27 games and tied one, a 0-0 tie at home against RB Leipzig in February. In that spell, Bayern is averaging 3.35 goals a game.

Bayern has been, to use Thomas Mueller's words, ruthless: "We want to show from the very start that there is no hope and there is no point hoping for a miracle."

MLS. It won't be every year that MLS has two products reach the semifinals of the Champions League.

Both players played prominent roles in the quarterfinals: American Tyler Adams (with the deflected winner for RB Leipizg against Atletico Madrid) and Canadian Alphonso Davies (with the assist of the tournament after dusting Nelson Semedo in Bayern's 8-2 win over Barcelona). And in both cases, their successes come only 20 months after they left MLS.

Of the previous Americans who played in the Champions League quarterfinals, only DaMarcus Beasley advanced to the final four. And he was the only one who wasn't a European product or didn't go to Europe without ever playing in MLS.

EPL and LaLiga. For the first time since 1996, no English or Spanish clubs advanced to the semifinals of Europe's top club competition.

Raheem Sterling. Things might have been different if the English international didn't have the miss of the year.

Manchester City was piling on the pressure in search of a second equalizer when Gabriel Jesus served a ball on a platter to Sterling, who missed from five yards, firing his shot high over an empty net in the 86th minute.

Lyon went down and put the game away a minute later when Moussa Dembele made it 3-1.

Barcelona. The Spanish sports press in Barcelona and Madrid reacted in unison -- literally -- to Barcelona's 8-2 loss to Bayern.

AS (Madrid) and Sport (Barcelona) both described the defeat as an “historic humiliation” on their covers. “Shameful end of an era,” was the headline in the Barcelona daily Mundo Deportivo,  while Marca in Madrid went with the one-word front-page headline: “Shame."

Pep Guardiola. Quickly lost was that Manchester City knocked out Spanish champion Real Madrid in the round of 16. The City manager came in for heavy criticism after his team exited the UCL in the quarterfinals for the third year in a row: