The genius of Neymar 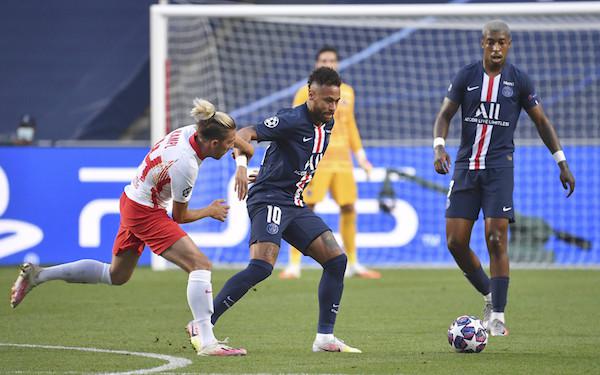 Neymar wasn't the best player on the field. Argentina Angel Di Maria had a goal and two assists.

The 28-year-old Brazilian didn't get on the scoresheet -- though he did hit the post twice in the first half.

But he was the inspiration in Paris St. Germain's surprisingly easy 3-0 win over RB Leipizg in the UEFA Champions League semifinals.

Throughout the first half, Leipzig chased Neymar in vain. And it was a touch of genius from the Brazilian that set up Di Maria's goal just before halftime.

The play began when Leipzig's Hungarian keeper, Peter Gulacsi, turned the ball over deep in his team's half, but it was Neymar's outrageous touch to jump and flick a pass straight to the open Di Maria for an easy goal that broke the game open at 2-0.

Neymar scored in PSG's first game back since March for the lone goal in the 1-0 win over St. Etienne in the French Cup final on July 24. He hasn't scored since then, not in the French League Cup final against Lyon, which PSG won on penalty kicks after a scoreless game, and not in the semifinals against Atalanta, though he was excellent in the comeback win.

“What can I say to Neymar to help him score a goal when I scored maybe two in my career,” joked PSG's German coach, Thomas Tuchel. “He scores in training, but he is playing exceptionally well, he is so, so strong. He has a winning mentality, a hunger to win and to show he is capable of being the best player in the world. If he scores in the final, then I'll be happy.”

The only question is whether Neymar will play in Sunday's final against Bayern Munich or Lyon after he broke UEFA's COVID-19 protocols for swapping jerseys with RB Leipzig defender Marcel Halstenberg after the game in Lisbon.

Social media accounts lit up with suggestions that Neymar faced a suspension or lengthy quarantine for the gesture, but UEFA's 31-page return to play rules, simply say about shirt-swapping that "players are recommended to refrain from swapping their shirts."