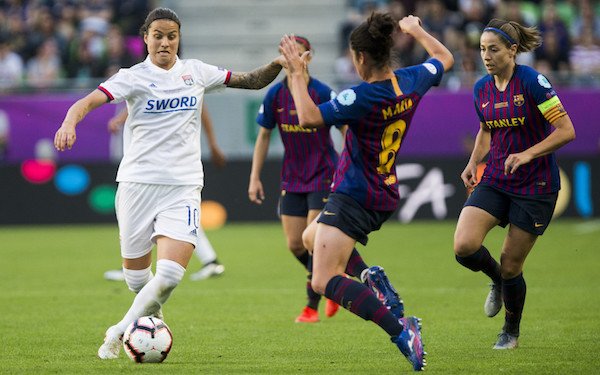 The UEFA Women's Champions League kicks off on Friday with the first two quarterfinals in Bilbao and San Sebastian. CBS All Access will cover all the action in the Final 8: seven games over 11 days. Here's what you need to know ...

1. LYON. No club has ever dominated women's soccer like Lyon: winner of 14 straight French league and seven of the last eight French cup titles, in addition to four straight UEFA Champions League titles. In 2018-19, Lyon went unbeaten in 36 competitive matches, winning 33 games and tying the other three. It enters the Final 8 with a record of 23 wins and three ties in 26 games, including the French Cup final in which it beat Paris St. Germain 12 days ago on penalty kicks after a 0-0 tie.

2. NEW ELITE. European women's soccer is increasingly dominated by teams from men's powerhouses. Five of the eight quarterfinalists in Bilbao and San Sebastian were also quarterfinalists in the men's Final 8 in Lisbon: Barcelona and Atletico Madrid, which meet on Friday, Lyon and Bayern Munich, which face each other on Saturday, and Paris St. Germain. Wolfsburg reached the round of 16 in the Europa League, while Arsenal won the FA Cup three weeks ago.

3. GLASGOW CITY. The only team in the Final 8 not backed a big men's club is Glasgow City. It has won 13 straight Scottish league titles, but its dominance is threatened by Celtic and Rangers, which have professionalized their women's teams and picked off players from Glasgow City. Its general manager and co-founder, Laura Montgomery, is a volunteer. Her day job is head of sales and sponsorship at Hibernian. Glasgow City features a pair of American journeywomen, Zaneta Wyne and Sharon Wojcik.

4. COVID-19. Atletico Madrid traveled to Bilbao without five players who tested positive for COVID-19. They include former Florida Star Deyna Castellanos and veteran Mexican international Charlyn Corral. All are isolating at home without symptoms. Their absences and the suspension of Brazilian Ludmila have reduced the Atletico squad to 14 first-team players for Friday's game against Barcelona.

5. NEW RECRUITS. Since the Final 8 comes three months after the UEFA Women's Champions League, UEFA has allowed teams to include on their rosters up to six new players signed for the 2020-21 season. The only restriction: players signed from teams still in the competition can't play for their new teams. The signings include several players who have moved from NWSL clubs: Englishwoman Jodie Taylor (OL Reign) and Australian Ellie Carpenter (Portland Thorns) at Lyon and Australian Steph Catley (OL Reign) at Arsenal. Teams can still hold on to players they had on their rosters for the 2019-20 season. Lucy Bronze and Alex Greenwood will play for Lyon before joining Manchester City next season.