The youngest player on the field when Bayern Munich beat Paris St. Germain, 1-0, in the 2020 UEFA Champions League final on Sunday was Bayern's 19-year-old Canadian left back Alphonso Davies, who moved from MLS to the Bundesliga giant less than two years ago. 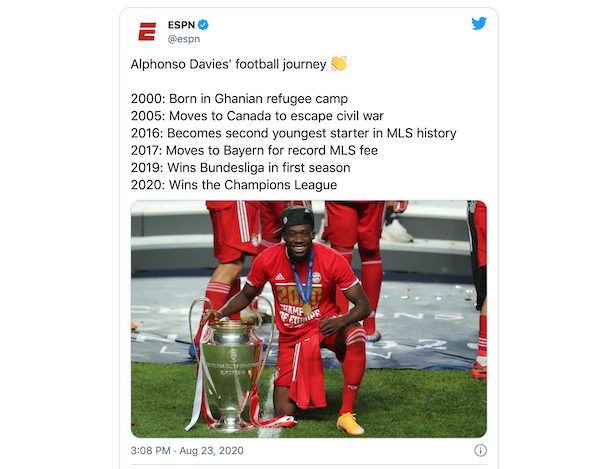 “Who would have ever thought a guy from Canada would be playing for Bayern Munich and win the Champions League?" Davies said after Frenchman Kingsley Coman's 59th minute goal against his former club gave Bayern its sixth European Cup and first since 2013. "Two years ago if someone told me this I’d say you are lying, but dreams do come true and I just want to say thank you to everyone for supporting me back home."

Davies made his MLS debut with the Whitecaps at age 15 in July of 2016 and played in 66 MLS games by the time he moved to Bayern on a base transfer fee of $13.5 million with performance-related bonuses that could raise it to $22 million. According to Sport Bild, the add-ons included a Champions League title, which means Sunday's victory sends another $1.1 million to the Whitecaps. 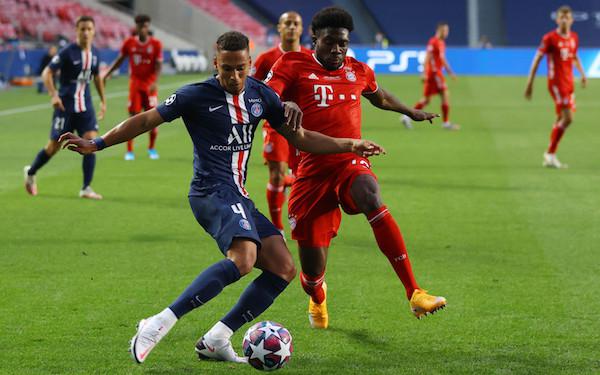 Bayern's scouting department tracks extraordinarily early pro debuts around the world and after Davies appeared on its radar, it got detailed insight on the young talent from the Whitecaps' New Zealand goalkeeper Stefan Marinovic, who early in his career had been a teammate of Bayern chief scout Marco Neppe at German third division club Wehen Wiesbaden.

The perennial Bundesliga champion came to terms with the Whitecaps and Davies in July of 2018 and the transfer was official upon Davies' 18th birthday in November. Much of his first season with Bayern was spent with the reserves in the fourth division, but he made six first-team appearances in the second half of the 2018-19 Bundesliga season. Those cameos totaled only 74 minutes of play but included a late goal in a 6-1 win over Mainz in March of 2019 in which he became Bayern's youngest scorer in two decades. 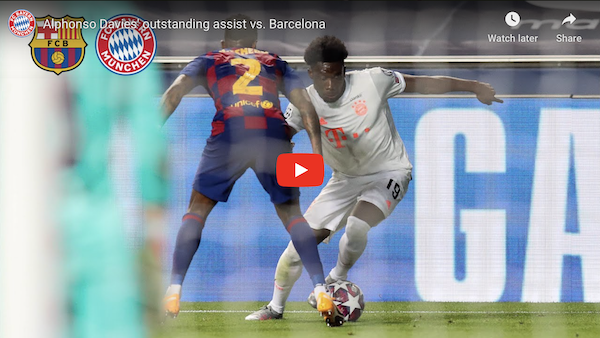 As Bayern won its eighth straight Bundesliga title, Davies appeared in 29 games, scored three goals and assisted on four. He was on the bench for Bayern's first three Champions League games then started the eight and played the full 90 of each including the Sunday's final. His standout performance came in the 8-2 quarterfinal win over Barcelona when he assisted on Joshua Kimmich's goal after 16 seconds on the ball that included a now famous roasting of Nelson Semedo on the left wing.

"I was almost ashamed of how happy I was after scoring, because it was obviously 99 percent his goal," Kimmich said.

Davies, who moved to Canada with his Liberian parents at age 5 from Ghana, where he was born in a refugee camp, was nicked-named the The Roadrunner by teammate Thomas Mueller. His speed -- he's been timed as the Bundesliga's fastest player -- is accompanied by dazzling foot skills. In April, Bayern renewed his contract through 2025.

"He's also very simpatico off the field," said 31-year-old Bayern defender Jerome Boateng, a 2014 World Cup winner. "He's remained a down-to-earth kind of guy. And he still has so much potential. One can expect even more from him. He'll keep getting better."