No way they could play: MLS players protest latest police brutality against a Black person 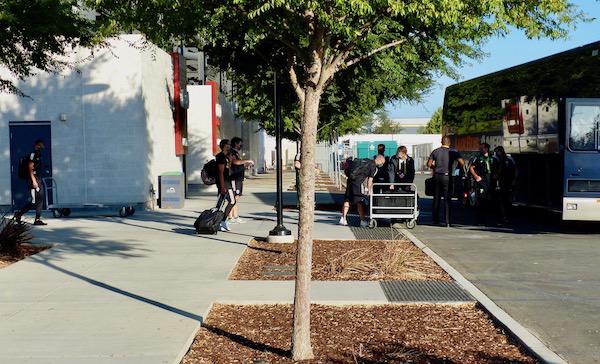 Two hours before the 7:30 p.m. kickoff, my editor-in-chief Paul Kennedy texted me that the game would very likely be canceled. Within minutes, I drove into the Earthquakes Stadium parking lot to go through the efficient COVID safety protocol for a game that would be without fans -- but the first hosted by the Quakes since the MLS is Back "bubble" tournament. I asked the parking lot attendant if the game was still on. He understandably might not have been able to follow the news of NBA, WNBA, MLB and MLS players' action during the previous few hours in response to Kenosha, Wisconsin, police officer Rusten Sheskey shooting Jacob Blake seven times in the back as Blake retreated into his car. The attendant responded, "Because of air quality or the protests?"

The California fires are still raging, but the Bay Area air quality had improved significantly. The attendant said he had not been updated on the game status, took my temperature, and double-checked my health questionnaire. I parked and headed to the stadium.

I felt fortunate to get a credential to attend this game that few were allowed in for, and was curious to see what it would be like without fans. But a few fans were driving in, because Earthquakes Stadium has an amazing big screen outside of the north-end goal, across the street from the Norman Y. Mineta San Jose International Airport. Planes fly close enough I bet that passengers on the left side can see the soccer action. The Earthquakes planned an excellent drive-in viewing party for season-ticket holders.

We had the cleanest air in more than a week. Heat wave turned to wonderful weather. It seemed like the perfect evening for soccer. But it was anything but.

I called Paul Kennedy after the text. He updated me on the news -- the latest out of Wisconsin and pro sports' reaction -- I hadn't followed because during my drive from Oakland I chose to listen to music -- I'm a news junkie and in these times I have to force myself to take a break. I felt selfish for hoping that they would still play -- but I knew they probably wouldn't because Paul's predictions are always accurate.

Then I stopped on way to the gate and spent a few minutes staring into my iPhone. The Blake shooting video, confirmation of the Wisconsin Department of Justice Division of Criminal Investigation about the shots into Blake's back, the arrest of a white male teenage shooter during the protests.

An Earthquakes official told us through the fence that the game was canceled. But communication was difficult because of the COVID precautions that required separating the various groups. Even he wasn't allowed to move from his zone to the players and coaches' zone, and he could only cautiously, from a distance, speak to the media. 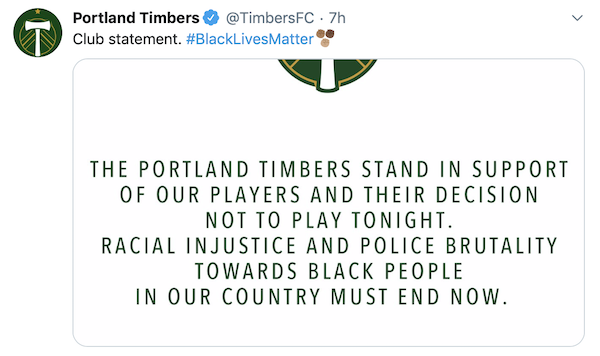 The Portland Timbers tweeted that they wouldn't play, then the Quakes sent their statement. This game would have been a 10:30 pm ET kickoff and there had already been the cancellations of the games in MLS, NBA, WNBA and MLB. The NBA had already been talking boycott on Monday -- and while we were standing outside the Earthquakes Stadium gates, there were reports that NBA players on the Lakers and Clippers proposed ending the season altogether. 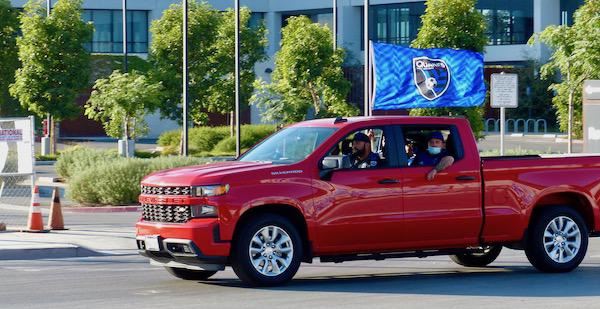 A big red truck with a Quakes flag entered the parking lot for the drive-in viewing party, followed by a convertible Mercedes, and they were informed about the cancellation. They were ensured of a refund and took in stride. Other cars followed and some attendants with gloved hands gave them Quakes souvenirs in a plastic bag as a consolation while instructing them where to make U-turns. 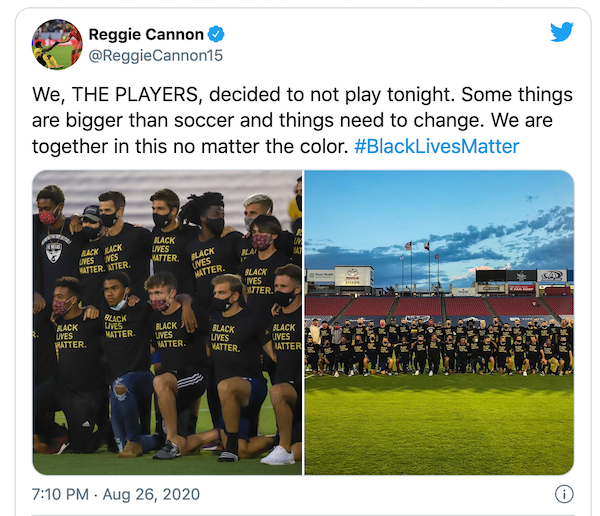 Six weeks ago, when MLS returned the play, the tournament started with a silent protest for 8 minutes and 46 seconds, the time that Minneapolis police officer Derek Chauvin had his knee on George Floyd's neck when he died on May 25. The group Black Players for Change had launched -- but the protests against racial injustice in the USA were supported by MLS players of all backgrounds and various nationalities. The Chicago Fire played a game during which every player wore a jersey with the name of a black victim of police brutality. 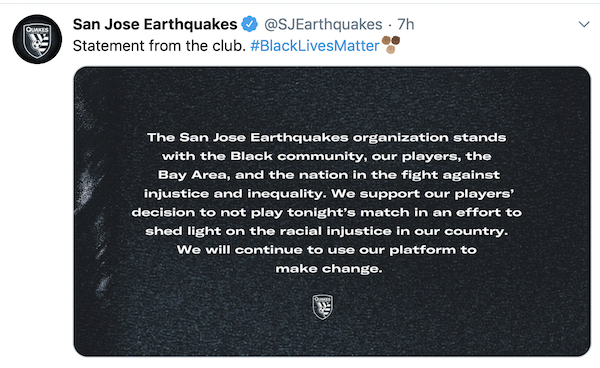 At Earthquakes Stadium, the Portland Timbers players left by bus, the Quakes players followed later in their own cars. Because of COVID, we couldn't interview them. Even if the match had been played, the post-game press conference was going to be on closed-circuit TV. But once again the MLS players -- and officials -- explained through social media their views on injustices that need to be addressed.

It was only last week we got back on an Oakland soccer field coaching kids, and despite restrictions to prevent the COVID spread, it was so wonderful to watch them enjoying the sport. At Tuesday's practice, I bragged about going to watch the Earthquakes on Wednesday. I didn't know at the time that it would be a game not played because pro athletes cared about these kids' futures.