After four years with Schalke 04, the FC Dallas product Weston McKennie, who turned 22 on Friday, is on the verge of becoming Cristiano Ronaldo's teammate at Juventus on a loan deal with clauses that could lead to a transfer fee totaling more than $30 million, according to German media reports. 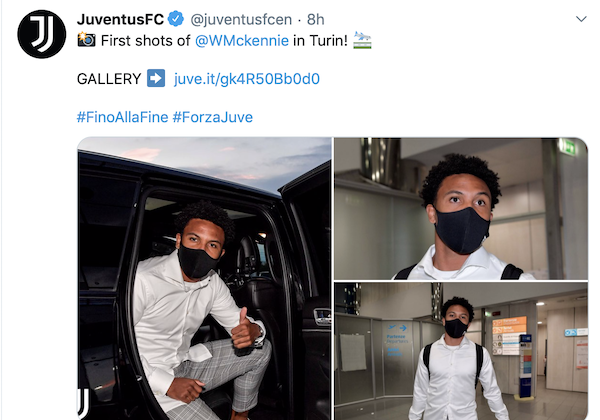 McKennie, the 2016 U.S. Development Academy MVP, arrived in Turin on Thursday and was scheduled for a fitness exam on Friday to close the deal.

Reports in recent weeks had Hertha Berlin offering $23 million for McKennie and similar offers from English Premier League teams. The Juventus deal reportedly begins with a one-year loan for which Juventus will pay Schalke between €3 million to €6 million ($3.5 million to $7.1 million).

How the deal ultimately unfolds depends on McKennie's individual performance and Juventus' success. Sueddeutsche Zeitung speculates that Juventus' outright acquisition of McKennie kicks in if by the end of the 2020-21 season he appears in at least 60 percent of competitive games. If that's the case, Schalke would be in danger of missing out on a big transfer fee it could have cashed in with an outright sale to, for instance, Hertha. But Juventus winning a 10th Serie A title or high enough finish for Champions League qualification could also be part of the agreement.

Whatever the specifics, German media consistently report that the purchase for McKennie after the first season would prompt a minimum $21 million transfer fee for Schalke. Bild reported that with all bonuses Schalke's earnings for McKennie would hit a maximum of $33 million.

Schalke acquired McKennie without a transfer fee in 2016 from FC Dallas, where the Texas native played from age 11 to 18.