Los Angeles FC head coach Bob Bradley has never shied away from offering his thoughts on social injustice, and he didn't disappoint Friday morning, going on an epic soliloquy during his first media teleconference since MLS games were called off Wednesday in protest of the shooting of Jacob Blake  by a Kenosha, Wisconsin, police officer. 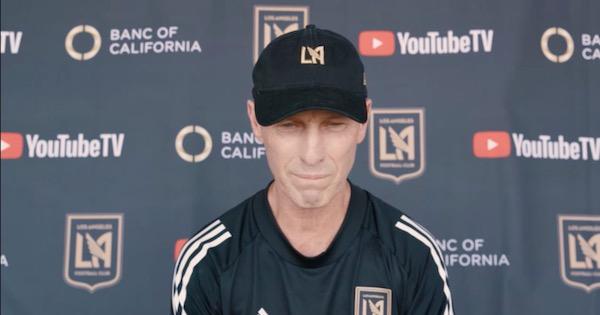 Bradley reiterated his support for the Black Lives Matter movement and the need to change methods of policing, praised MLS players for their roles in standing up for civil rights and in Wednesday's postponements, and warned of how facts were being twisted by those against the movement while cautioning that violence associated with or accompanying protests was harming the cause.

He also called Real Salt Lake owner Dell Loy Hansen's controversial remarks about the protests and postponements “wrong” and said he didn't believe “there's a place for that type of leadership and ownership in our game.”

Bradley opened his remarks from LAFC's training center at Cal State Los Angeles by noting that it was the 57th anniversary of the legendary March on Washington and 75th anniversary of Branch Rickey's historic meeting with Jackie Robinson, then launched into a lengthy diatribe on the divisiveness that is increasingly defining American society.

“The divide that everybody talks about right now, as a coach, we always think about 'we,' talk about a team,” he said. “What we are all about, what we stand for, and so today when I think about 'we,' it's not just a team, it's not just LAFC. 'We' for me today would be all the people that really want chance. And I know that's not everyone, because the divisive rhetoric, the lies and the misinformation that comes from other people, all we hear about is fear.

Bradley noted that the movement isn't “anti-police” and criticized a television advertisement supporting President Trump's reelection in which a phone rings in an empty police station before the call goes to voicemail.

“That is getting in the way of the real things that we need to be on top of, and then we are losing, then we are letting them win,” he said. “So somehow, we have to be better and smarter when we protest about police brutality. We've got to make sure that that protest is peaceful. Because if it's not peaceful, it's going to end up on some news or some social media and it's going to take away from our efforts to get things the way they need to be.

“So the 'we' in this case is all of us who ... see these videos, we see these incredible murders, sad, sad families over and over and over, and we can't let the rhetoric and the misinformation and the lies get in the way of what we need to do. We can't be against each other. We've got to find a way to change that. ... We need to find the right way to speak respectfully to police, who have a hard job, to work with police for new ways of policing, deescalation. We've got to make sure that now we are winning this moment, all right? Because if we don't, the strategic words and misinformation, lies that comes from the other group of people is only taking us away from the things that we must, must find a way to change.”

Bradley later said that when “we let the protest turn violent, then there are people that misuse those clips about what Black Lives Matter is all about. Black Lives Matter is simple: For too long in this country, black lives didn't matter. And so enough of us must make sure that we're together in that belief. And whether you wear the [Black Lives Matter] T-shirt, whether you stand for the national anthem, whether you kneel for the national anthem, those aren't the important issues. The important issue is we believe there must be changes, and now it's more than just a gesture. It's finding real ways. ...

Bradley was Egypt's national team coach when revolution arrived in 2011, and rather than head for home, he remained in Cairo and marched with protesters in support of the Egyptian people. He was asked about correlations.

“In Egypt, I was there for weeks, and I realized that it was impossible for people to know the truth,” he said. “Between media, social media, misinformation, no one ever knew what was real. And, sadly enough, finding the truth in our country at this time has gotten really difficult. The social-media world between trolls and bots and all sorts of stuff that comes out twists people's minds in all the wrong ways, and it takes us off a fundamental sense of what's right and what's wrong.

“Come on, there's enough people in our country, I'm optimistic. I believe there's enough people in our country that look at some of these incidents ... incidents we must agree is wrong. And then we must work with the police to find a way it doesn't happen again. So yeah, the truth in Egypt was impossible, and we can't let that happen in the United States.”

LAFC's players, led by Mark-Anthony Kaye, one of the leaders in MLS's Black Players Coalition, made the decision not to play Wednesday night at Real Salt Lake, said Bradley, who added that he was proud “that LAFC as an organization understood, respected and stood with our players.”

“LAFC from ownership through management through the coaching staff through all the employees are proud of what the players stood for, and we were all in agreement that that night, it was the right thing to do.”

Hansen, RSL's owner, was critical of the decision not to play during an interview broadcast on a radio station that he owns, comments that were met by calls for his removal as owner.

“I'm very, very supportive of an inclusive, fairly liberal agenda. That is who I am,” Hansen said, according to a transcript of the call published by SB Nation's RSL Soapbox website. “I have been strongly in favor of that. Maybe that agenda has gotten so far that we're punishing all sides of society who would love to support an inclusive society. But then when you do that, the fact that saying, because maybe you're so accommodating or you're caring that you can be easily slapped, and I take it as a profound slap at our community-values structure of trying to build an organization that develops youth, supports the community through our foundations, that reaches to employ 250 people here.

“And then when it says there’s another issue in society, why don’t we punish you? While I don't know that's the direct intention, that's the end result. A lot of people will be punished. We’ll have to lay people [off]. ... The implications become profound. ... We're all sitting here at an organization trying to build support and love around a team that supports the city. All I can say is they supported other issues nationally; they clearly did not support our city or our organization. That's fairly clear.

“It's a moment of sadness. It's like somebody stabbed you and you're trying to figure out a way to pull the knife out and move forward. That's what it feels like. The disrespect is profound to me personally.”

Bradley, asked about the comments, for which Hansen partially apologized the following day, called them “wrong” and Hansen's “way of looking at things is wrong.”

“When we talk about real change, [it's important that we have an] understanding what a protest means,” Bradley said. “If you go back to Colin Kaepernick, there were people who made him out to not love the country, and it was a way of dividing and taking away. [Rather than] understanding why he took a knee and respecting that decision, and knowing in that moment he loves this country.

“I believe that taking a stand for something that is right is patriotism, and I believe that standing in front of people as a leader and telling lies is not patriotism. I think there's enough there that we can all see that there's a pattern, and now I don't believe there's a place for that type of leadership and ownership in our game.”

Bradley also said that he believed that “absolutely the majority if not every single player and coach” in MLS “recognizes” that Hansen's comments “gets in the way of us as a league moving forward” but said the responsibility for how to deal with them rest with the league's ownership group, Commissioner Don Garber and other league-office officials. MLS (and the NWSL, in which Hansen owns the Utah Royals) on Thursday announced an investigation of Hansen after The Athletic reported he has used racist language in front of players and employees of his teams.

LAFC will return to field Sunday evening at Seattle. The primary topic of conversation with players, Bradley said, has concerned the bigger picture rather than the 90 minutes at CenturyLink Field:

“When I speak to the players, we talk about what's going on and how we must find a way to stand together. I really want the players to understand and think for themselves. I don't want them to feel that they are going to be viewed one way or another by whether they put a T-shirt on or whether they stand or kneel. What I want them to understand is that we must all fundamentally see what's going on that's wrong, and we must as a team stand for change, we must as a club find a real way to not just put out a statement, but be involved in communities to find ways so that we are really, truly doing something that matters."

los angeles fc, mls
6 comments about "Bob Bradley on the meaning of 'we' and why Utah owner Dell Loy Hansen is wrong".
Read more comments >
Next story loading