A return to reffing with COVID prevention precautions

Positive virus cases from testing have been steadily around 1% for the past three months in New York State, allowing soccer games to be played here for the first time since early March. Since all my matches were indoor futsal games this year, I had not refereed an outdoor game in 2020. No longer as I refereed a boys U-17 friendly solo, with the help of club assistant referees on Aug. 16. I continued reffing friendly games and then tournaments when they rebooted in late August.

As the day grew closer to when soccer games would reboot, I started getting ready. I had maintained my fitness but started running once a week in the heat at mid-day to acclimate to the conditions when I would start refereeing. And since I only wear contact lenses when I ref, I started wearing them at home so it was close to second nature once again for having them on during games.

Yet all the running and exercise cannot replicate officiating several games on a weekend morning or afternoon, so I was feeling it at tournaments.

I wore a mask upon entering and leaving the field, took it off when I was refereeing and wore it during the match as an AR if people were around me. Such as AR1 being near substitutes, especially those waiting to go in at the halfway line. 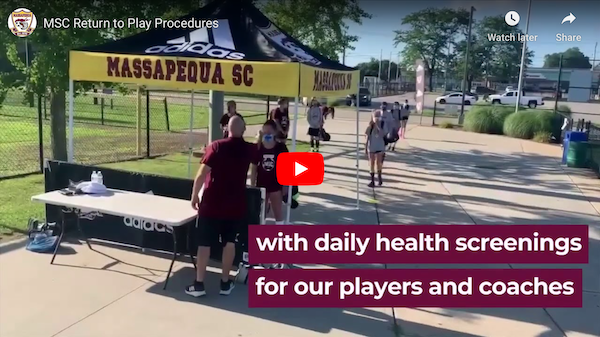 Running while wearing a mask seemed to restrict breathing. I would be remiss if I did not mention that U.S. Soccer says “to discuss with your Primary Care Physician if any medical conditions pre-dispose you to avoid the use of a face cover while participating in physical activity.”

Unlike the AR’s position just outside the touchline in line with either the second-to-last defender or the ball, whichever is closer to the goal line, the ref’s position is not as rigid. So when booking a player, I made sure to keep a social distance but still made it clear who was being sanctioned. In getting the 10 yards on ceremonial free kicks, I marked the distance but stayed well away from where the wall would form. I tried to avoid handing the ball to players as well.

With these precautions, I have felt safe when officiating.

U.S. Soccer guidelines call for coaches and substitutes to wear masks for the duration of the match. But there was a lack of enthusiasm by the subs in complying even though this is one of the easiest ways in a soccer setting to catch the virus so coaches really need to be on top of this. And officials should give them friendly reminders that wearing masks is mandatory.

Other protocols I have noticed at fields include temperature checks and COVID Tracking Contact Sheets that coaches complete with a list of their players.

No need for me to check passes at friendlies or tournaments but this will occur when league play hopefully restarts soon. I think the best method would be for the coach, with a mask on, to show ref the pass as player approaches, with mask on, but hopefully still maintains a social distance. Of course, the ref is wearing a mask as well. At conclusion, coach should put passes in plastic bag and hand to ref for those leagues that require ref to keep passes until the end of the match.

Unfortunately, I expect that rebooting soccer could be like re-opening society, a series of starts and stops, until a dependable and safe vaccine is developed and most people have been vaccinated. So especially in light of this, I expect to approach every game that I am assigned with more enthusiasm than I’ve ever had before.

I have felt safe but for those who are worried about refereeing again because you are concerned about your safety, do not give your availability to assignors. Wait and see if any of your colleagues become sick from refereeing and make a decision based on that.