Knockout soccer for Europe's top competitions? Only if we go the whole way

In November 2004 I was lucky enough to be at one of the most thrilling MLS games in the league's history, when D.C. United beat the New England Revolution on penalty kicks following a 3-3 draw in the Eastern Conference final. It wasn't the end of D.C. United's season -- eight days later they won the MLS Cup by beating Kansas City 3-2 in the final, way out west in California. But that noisy see-saw Saturday night in front of 21,000 mainly home fans in RFK Stadium was the absolute climax of a most memorable season.

I watched the victory over Kansas City at home on my sofa on a Sunday afternoon. I barely stirred, despite this apparently being the year's showcase face-off. That game, I felt, would have meant much more to fans if more of them had been able to see it live, in their own stadium -- whether in D.C. or Kansas City. The screen has a habit of sucking out the connection between spectators and team, especially if there's no sense of atmosphere in the actual venue coming via the broadcast.

I thought of these two games last week when numerous commentators were praising the format of the improvised Champions League and Europa League tournaments. All of a sudden, the single game format was "more exciting" than games played over two legs, while condensing the games into the space of two weeks in a limited geographical area gave the competitions a 'World Cup' feel. UEFA says it will take this into account when discussing future formats for the competition. (The current format is fixed until 2024.)

First, let's not get carried away by this apparent excitement. The Champions League final was close and tactically absorbing, if you like that kind of thing (four clear chances per team over 90 minutes), but the final is in any case always a single game at a neutral venue. The two semifinals were imbalanced 3-0 victories for Paris St. Germain and Bayern Munich respectively. 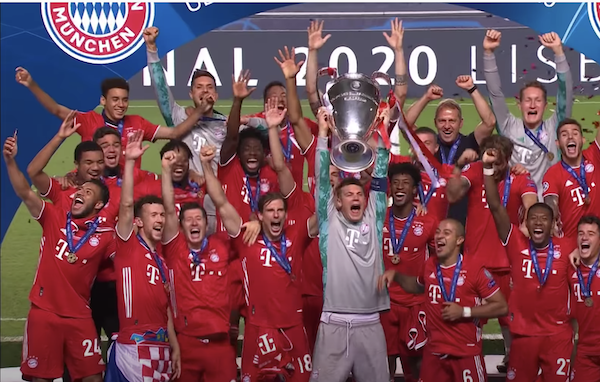 In the quarterfinals, Bayern's 8-2 mauling of Barcelona was fascinating historically in a car-crash kind of way, but it was hardly competitive. Late winners from PSG and Leipzig against Atalanta and Atletico Madrid in two of the other quarterfinal games were dramatic, but the soccer was not great. Only Manchester City's surprise 3-1 loss to Lyon was a truly tense and high-quality encounter that could, right until the end, have gone either way.

In short, the games provided the same amount of thrills and snores that you'd have gotten over the customary two-legged ties.

It's true that with the digital age having shortened our patience and attention spans, it's satisfying for some to see a winner on the evening. But even if we suppose that this tournament had allowed fans to travel to Portugal for the last seven games, this format would only ever benefit the following:

1. UEFA and its biggest clubs, who would renegotiate and increase the income from TV broadcast rights by hyping the knockout tournament as the greatest thing in club soccer history, and possibly even better than the World Cup. 2. TV fans and 3. Fans rich enough to travel and follow their club for two weeks in a city where hotel prices would rise in accordance with expected demand.

Who would lose out? The vast majority of fans who follow their teams week in, week out, but who would be deprived of seeing their side in the biggest games of the season (maybe even their history), against the most storied opponents. Then there would be the consequent loss of atmosphere in the venues themselves, as we often see at major finals and World Cup games. Huge numbers of tickets are allocated to wealthy neutrals, flunkies and freeloaders associated with the soccer 'family,' and corporate clients prepared to splash out exorbitant amounts of cash for the sake of preening their own prestige.

There's also the fallacious argument that two-legged ties are 'too tactical,' as though teams throw all strategic considerations to the wind in a single knockout game. A weaker team will almost always be more cautious against a stronger, wealthier club, and hope to catch them on the break -- that's likely the case whether they're at home, away or in a neutral stadium, over one game or two. Besides, every game nowadays is arguably 'too tactical.' That's simply the nature of modern soccer. It requires a lot more patience from the viewer than it did 20-30 years ago. If single game knockout competitions are really so exciting, then let's go the whole hog and abolish the tedious, drawn-out, cash-generating group stages, which only exist to winnow out the teams not from England, France, Germany, Italy or Spain.

This is a Cup, after all. Scrap the Europa League and throw the top clubs from every league in Europe into one big competition -- March Madness, but from August to May. There's no seeding, and home advantage goes to whoever comes first out of the hat. Broadcast money should be equitably distributed among all participants (be they from London or Latvia), with sane amounts of prize money the incentive to progress.

Maybe then we'd see some different names on the trophy. Leagues measure the strongest teams. Knockout competitions nurture chance, luck and surprise, but only if they're not rigged in favor of the international mega-brands. If UEFA and soccer’s newly enlightened pundits truly believe in excitement, then reform these competitions in an honest way -- for the sake of the game, and the actual fans who pay to watch it.