The most tangible evidence of what Orange County Soccer Club is gaining from its strategic partnership with Scottish giant Rangers FC covered all of perhaps eight seconds in a 2-1 victory over LA Galaxy II, a result that extended its unbeaten run to start the USL Championship campaign to six games.

The agreement, put in place last December, has many facets that will, those involved anticipate, pay off handsomely down the line. For immediate gratification, there's this: two perfectly weighted passes to set up the first goal and a brilliant finish to secure the three points.

Danny Finlayson and Cammy Palmer, young Rangers FC pros getting some needed seasoning in Southern California, are making sizable contributions for OCSC, and not just in knocking off the closest rival. Both have become regulars in head coach Braeden Cloutier's lineup, part of the path they hope will lead them into Rangers' first XI.

It's the start of a planned annual series of loans from the Glasgow giant. There's more to it, of course, mostly dealing with player development, OCSC's primary emphasis under general manager/president of soccer operations Oliver Wyss and his staff.

Three OCSC teens, all part of the first team -- midfielder Francis Jacobs, forward Diego Lopez and co-first-choice goalkeeper Aaron Cervantes -- spent time with Rangers' academy last winter, and Jacobs, who turned 15 in February, played for the Gers' under-16 side at the prestigious Alkass International Cup in Qatar. More will follow, and Cloutier says the hope is “we're going to be able to move some permanently” to Rangers “really soon.” 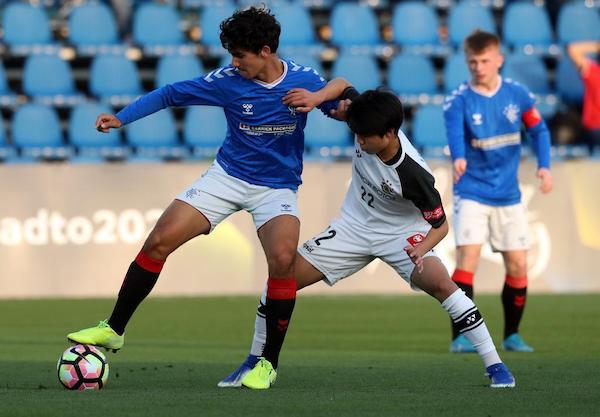 Southern Californian Francis Jacobs (left), who in April 2019 at 14 years, 4 months and 29 days, became the youngest male soccer player to sign a pro contract in the USA when he joined Orange County SC. He played for Glasgow Rangers FC U-16s at the Alkass International Cup earlier this year in Qatar.

“Having a partnership with historically the most successful club in Europe [119 trophies, all but two of them for Scottish league or cup titles], and them partnering up with us and seeing the value in our player development, is a great compliment in what we're trying to accomplish ...,” said Wyss, a former Swiss pro who in the mid-1990s played in Southern California for the APSL's L.A. Salsa and the indoor Anaheim Splash. “I think [it] shows that we're on the right track.”

OCSC hasn't been on this particular track all that long. It has been playing in USL's competitions since 2011, first as the Los Angeles Blues (while always calling Orange County home). The club has won two divisional titles in nine seasons and reached the USL semifinals two years ago, in Cloutier's first campaign as head coach.

Private equity investor James Keston bought a majority share in the club in 2016 and changed the name, and the team moved into the new, 5,000-capacity Championship Soccer Stadium at Irvine's Great Park the following year. The emphasis on developing talent and playing youth followed, and an academy debuted last season. Cervantes signed a pro deal when he was 15, Jacobs signed last year at 14 and has made the 18 six times this season, and 16-year-old Kobi Henry got his initial first-team start in late August.

Rangers' brass got a look at the setup last year and liked what they saw, noting, especially, the experience of technical director Frans Hoek, whose resumé includes coaching stints at Ajax, Barcelona, Bayern Munich, Manchester United and with the Dutch national team. There is commercial opportunity, too -- managing director Stewart Robertson said while announcing the relationship that it would provide “a permanent presence in the U.S.” and “help us engage” with the club's fan base in this country, including a considerable Southern California following -- and Cloutier is relishing the opportunity to study the Rangers' methods.

And it's win-win on the playing front. OCSC gets to send its youngsters to Glasgow for training, and Rangers has a destination for young pros not quite first-team ready who will benefit from a spell far from home.

At some point, no certainty when, everyone can get a closer look into the whole thing, thanks to a documentary series, “Path to Glory,” that's following the loaners in O.C., as well as three OCSC teens in Scotland. The first episode debuted July 16 on ESPN2 and was available for 48 hours on ESPNFC's YouTube channel. Wyss said the club was “in negotiation with some networks and some other big providers” for full distribution. 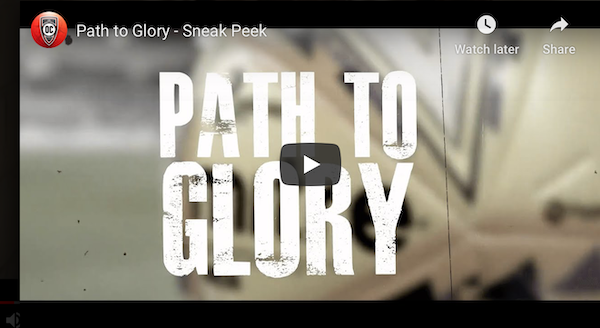 The series has been available, at least in part, in Scotland. Rangers fans, OCSC's Scots say, found it oddly funny that Finlayson, Palmer and Matthew Sheils -- another Rangers loaner who for personal reasons had to return home just before the COVID-19 pandemic hit -- were subtitled for American audiences. It's created an awareness, they say, of what's happening 5,100 miles away.

Finlayson, a 19-year-old defender in his first pro experience, and Palmer, a 20-year-old attacking midfielder who spent time last year on loan at Partick Thistle, consider their opportunity a rather special one, even if one of the greater attractions -- 11 months in sunny L.A.! -- disappeared when the virus showed up.

“We were here for only three or four weeks before the pandemic hit,” said Finlayson, who is from Kirkintilloch, a few miles north of Glasgow. “Went to the center of L.A. and we've done a couple of things and we go to the beach sometimes at Laguna and Newport, but we're not here for holiday.

“Everyone says, 'California,' and yeah, that's good, but we're here as players. These next two months is the reason why I've came. It's disappointing, but it's not the reason I've came. I've came to play football and to grow and to learn as a person as a player, so that's what's I've got.” 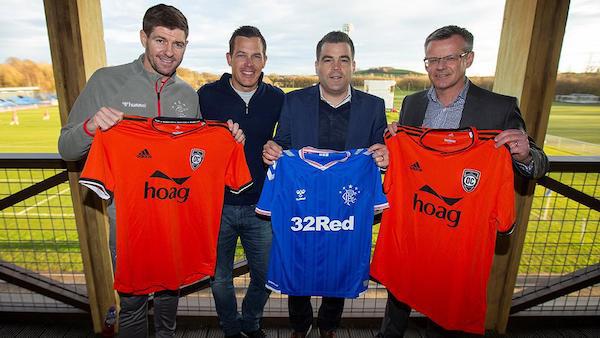 RANGERS VETERANS. OCSC surrounds its youngsters with veterans -- six former MLS players see time, including former U.S. national team defender Michael Orozco and New England/Orlando City defender Kevin Alston -- and center back Rob Kiernan and midfielder Harry Forrester, both formerly with Rangers, are considerable assets for the duo, who have been “sponges.” Cloutier calls the veterans “like big brothers to them.”

“For me, I have Rob Kiernan, he's somewhat similar to me, similar to my playing style,” Finlayson said. “It's good to pick his brain on things and see what he does and then look to go back to Rangers and have a career. It's invaluable to have players of that caliber to be playing with, something tough to get in your first loan, and I've got it.”

Finlayson, a 6-foot-3 center back, has been something of a revelation at right back, putting forth superb efforts in his first two games, a 1-1 draw with and 1-0 victory over Phoenix Rising FC in July at Great Park.

“He's facing probably the best wingers in our league, and, quite frankly, we shut their wingers down those two games,” Cloutier said. “He's extremely focused and disciplined [and possesses a strong] knowledge of the game and [with] recognizing situations and really understanding himself as well, what level he's at and what he needs to improve. ... He's got a good head on his shoulders, and I think he has a big future.”

Palmer, who was born in England, spent most of his youth near Toronto, then moved with his family to Glasgow when he was 12, is a skilled provider who has done well once he adjusted to the heat and pace, far different from what he sees in Scotland.

“Cammy is a great possession player,” said Cloutier, a former attacking midfielder who spent five seasons in MLS with San Jose and New England. “Cammy sees the game. He's a very good student, a very professional player, reads the game very well, picks passes out. ... I think the biggest thing for him is the mental side of the game. He's an extremely nice kid and a very polite kid, and he needs to probably find his alter ego at times when he's playing. That's what I think, ultimately, Rangers is expecting us to help him with.”

They were at their best in the Aug. 22 victory over Los Dos at Dignity Health Sports Park. They combined to set up an early goal -- Finlayson threading a 25-yard ball between defenders and onto Palmer's path for a dipping cross onto Sean Okoli's boot for a volley -- and Palmer netted the second-half winner, picking up a headed clearance outside the box, stepping forward and blistering the ball into the netting inside the left post. Both were beauties.

A PLEASANT SURPRISE. Palmer calls OCSC “a perfect fit” and says it's a “once-in-a-lifetime opportunity for us to come here and not only play football on a good level, but experience a different lifestyle, different culture, just all the different challenges that come from leaving away from family and living by yourself.”

He was pleasantly surprised by the level of the play he's encountered among the USL's southwestern clubs.

“Obviously, America's getting better and better, and not many people back home know much about the USL,” Palmer said. “Mostly they know about the MLS, with all the good players going, and I didn't think the level would be as good as when I actually experienced it.”

Finlayson has been impressed by the “intensity” of the games.

“I kind of had the impression that it was going to be slower because of the heat, but America has athletes, and they can press, they can work at that level of intensity,” he said. “I was kind of surprised at first. I thought I would have more time on the ball or whatever, but they were straight on you, which was surprising. And the level of player surprised me as well. ... A lot of things surprised me.”

All the better. He and Palmer have big aspirations.

“I want to play for Rangers. I want to become a first-team player,” Finlayson said. “I've not come here just for the fun of it. I came to learn. I came to grow. And I think if you've not got that in your mind, to be a Rangers player, then there's kind of no point in dong it. Since growing up, I've always wanted to do it. I've always wanted to play for a big club, and not just be [in the squad]. I want to be one of the main players in Rangers.

“It's a big goal, it's a big ask, but I think through hard work and determination, it's something that I'm striving towards, and I'll get there if I do it.”

It's quite a leap.

“Being at Rangers, you can understand how big the level is and how much it takes to play for Rangers,” Palmer said. “And that's not something you can just walk into, because there's so much history, there's so much pressure on you to perform every week, to play in front of 50,000 fans. So I think that's why just getting this experience is so valuable, not just as players, but dealing with the pressure of having to win leagues, having to win every single game, because at Rangers, that's what it is. Like, you need to win every single game, no matter who you're playing. That's just the expectations of Rangers fans. And that's always been the expectations. ...

“We're just trying to develop more as players and really take our game to the next level and not just come here and do all right and just kind of blend in and be just an average player. We want to be the best players on the team, in the league, and then just show Rangers back home why we deserve to be in the first team.”