Ellie Maybury and Julian Haigh, who have both been working at U.S. Soccer are joining U.S. head coach Vlatko Andonovski’s staff full-time as  Head of Performance and Sports Scientist, respectively. 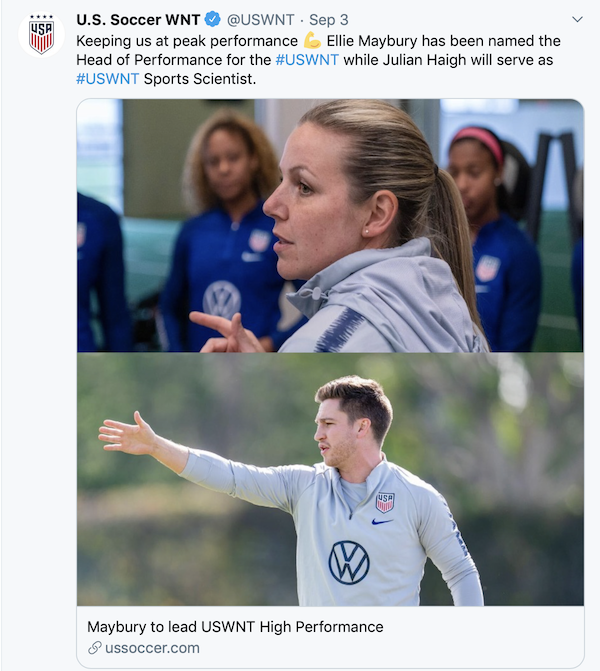 In England, Maybury worked as a paramedic for two years in the West Midlands and four years for England FA and Birmingham Women FC.

Haigh has worked for U.S. Soccer as a sports scientist for three years, overseeing all NWSL clubs -- helping gather and analyze fitness and performance data of every player in the pro league -- and the U.S. U-23 women's national team. He will continue in his role with the NWSL while working with Maybury.

Haigh, who was born in Haigh was born in Boston before moving to England as a young child, worked five seasons in sports science and strength and conditioning with the Widnes Vikings in England’s professional rugby Super League.

“Ellie and Julian are highly motivated professionals with a passion for sports science and both have several years of experience working their way up through our youth national teams and the NWSL, respectively,” said USWNT general manager Kate Markgraf in a press release. “The physical training and monitoring of our players is tremendously important to how we play and paramount to maintaining our players’ health and well-being, especially coming out of the pandemic, when most of the players will have played significantly less games at the club and international level.

"With their individual and collective experience, they are vital in navigating the physical needs of our players to compete for world titles. We are privileged to add Ellie and Julian as full-time members of the senior national team staff.”