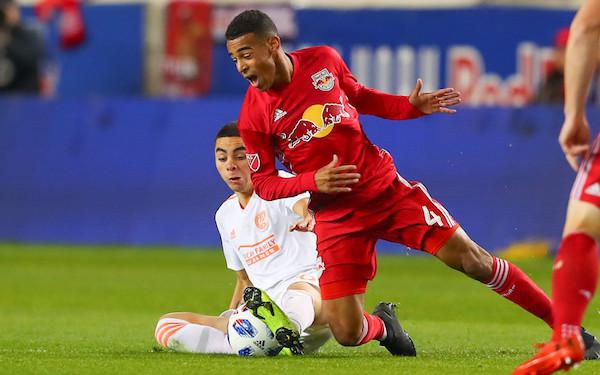 After Atlanta United, which fired Frank de Boer within days of its exit from the MLS is Back Tournament, the New York Red Bulls became the second MLS team to fire its coach since the start of the season when they sacked Chris Armas on Friday.

One thing stands out: both teams are shadows of the teams they were two years ago when the Red Bulls won the Supporters' Shield with a record 71 points and Atlanta United was second with 69 points and won MLS Cup.

Atlanta United, which finished last out of 24 teams with three 1-0 losses at the MLS is Back Tournament, was very lucky to escape with a 1-1 tie at Orlando City on Saturday night, needing a stoppage-time goal  from Adam Jahn to earn a point. It has just one win in seven games since MLS play resumed in July.

Wednesday's 1-0 loss to D.C. United on a goal by Erik Sorga in the eighth minute of stoppage time extended the Red Bulls' slide since play resumed. Their only wins in seven games are a pair of 1-0 wins over Atlanta United and NYCFC, and they've managed to score three goals.

Beyond any coaching issues, both teams have struggled because they broke up winning lineups and failed to adequately replace the players they let go. MLS's roster budget constraints certainly play a factor in teams disposing of players they might other keep, but they are not the main factor in the problems Atlanta United and the Red Bulls have encountered.

Atlanta United has had some bad luck, losing Darlington Nagbe in the offseason after he requested a trade to Columbus and Josef Martinez with a knee injury in the 2020 season opener at Nashville SC. But the Five Stripes never could replace Miguel Almiron after his MLS record $27 million transfer fee to Newcastle United. Neither Ezequiel Barco nor Pity Martinez has come close to matching Almiron's production (21 goals and 28 assists in two seasons), and it looks like both players could be sold.

The Red Bulls sold young star Tyler Adams, who joined Vanney at RB Leipzig. Without Adams, their pressing game hasn't been the same. They later transferred Michael Murillo and Kemar Lawrence to Anderlecht. Kyle Duncan has filled in nicely for Murillo at right back, but Lawrence, MLS's top left back when healthy, has been much harder to replace.

There is no turning back on becoming selling teams. It's been good business for Atlanta United and for the Red Bull network, but selling teams only remain as strong as the new players they bring in.

The 2020 MLS season has been filled with uncertainty, complicating incoming transfers. On the eve of the season, MLS reached a new collective bargaining agreement with players and will introduce a Designated Player classification for under-23 players. How the COVID-19 pandemic impacts the international player market remains to be seen.

If Pity Martinez and Barco are sold, Atlanta United will aggressively move to replace them -- but the standard should be whether their replacements achieve Almiron's level on the field, not the value they offer as assets on the player market. The Red Bulls' signings of Dru Yearwood from the English Championship and Samuel Tetteh on loan from Salzburg don't exactly scream ambition -- especially not Big Apple ambition.

Becoming buying and selling teams involves a certain amount of risk. What should be their insurance policy is the production of their player development program. In neither case has the two teams stood out. The Five Stripes signed four Homegrown Players ahead of their start in 2017 -- all youth World Cup players -- but none is currently on the first team. Adams was the jewel of the Red Bulls' academy program. No player who has come out of the Red Bull academy in Whippany since then has come close to matching his influence.

But one thing is for sure: MLS can't afford to have two of its most important teams -- Atlanta United with its 50,000 fans a game and the Red Bulls in the No. 1 media market -- flounder for long.