Last time, I was talking about how words are used -- and misused -- in soccer’s rulebook. There’s not much freedom for words in a rulebook. Clarity is what matters. Ambiguities are the big no-no. No synonyms or indirect references, few adjectives.


Inevitably, rulebooks are a bore to read. So, enough of that arid landscape. Let’s see what the soccer gurus -- the experts who do a lot of talking on TV, the journalists who do a lot of writing (self-disclosure: I belong to that second group, the scribblers).

Among the gurus, the rigidity of the rulebook disappears, overwhelmed by a swirling torrent of opinions expressed in a hundred different styles and languages. It sounds like chaos, but it’s chaos within bounds and most of it is easy to listen to or to read.

The gurus have colorful terms to describe the action (I’ve just expanded the group to include coaches and players who must have invented a lot of those terms). When Alf Ramsey, coach of England’s 1966 World Cup winners, opted for a formation that excluded wingers, his team became known as the Wingless Wonders. That was nice, but much, much better was the neat and amusing Penguin Formation.

The best of the terms describing player moves are short, sharp comparisons to familiar actions from every-day life -- the bicycle kick and the scissor kick need no further explanation (though, if you do have any doubts about that, please, please take a look at this: 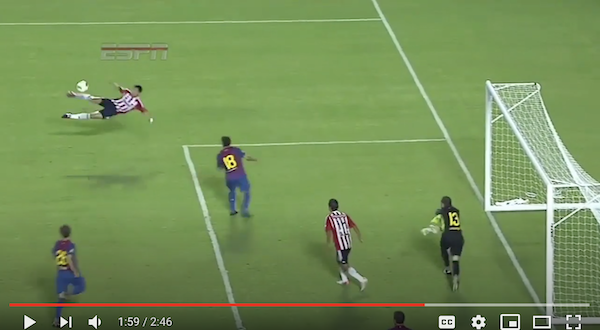 ... which has to be the best example I’ve ever seen of any of soccer’s more intricate skills being perfectly executed -- a spectacular goalscoring scissor kick from Mexico’s Marco Fabian. Wow!)

The idea is to make the words interesting, even downright fascinating. Of course, things can go too far. Deplorably, guru-talk, particularly when it deals with tactics, has run away with itself, descending from its original triteness, through blatant silliness, now arriving at what is hopefully its terminal stage, the ultra-imbecilic.

As the prize entry in this sad tale of language degeneration we have the case of the False No. 9. When trying to understand a “false” anything, one has first of all to know what the real or true version is.

So what is a Real No. 9? We’re dealing with the way that soccer players used to be numbered. Note that: used to be. We have to go back at least 50 years to the days when every team played with a center forward -- he was their most advanced attacking player, their goalscorer -- and he always wore shirt No. 9. If he was out injured, his replacement took over the No. 9 shirt. It was the playing position, rather than the player, that was numbered.

But we’re already in trouble trying to define the No. 9 because during those 50 years the role of the center forward has changed, as have the characteristics of the players. To define a typical (true?) No. 9 -- tall, physically impressive, powerful accurate shooting, good in the air -- may have made sense in the 1950s. But smaller, more mobile -- and more skillful -- No. 9s began to appear. And the custom of allotting permanent numbers to players, to be worn whichever position they played, took hold.

So we are expected to envisage a false version of something that defies clear definition. Quite a trick.

If we turn to the use of language, more problems arise. The word “false,” as an adjective, has nine different definitions in my dictionary, including wrong, dishonest, counterfeit, not properly named, and meant to deceive.

Wrong, dishonest, counterfeit won’t do. Not properly named, maybe -- but as it is the gurus themselves who describe a player as a False No. 9, that won’t work. As for the idea of a player pretending to play like someone did 50 years ago, and hoping thereby to “deceive” experienced opponents -- oh, please.

Do we have a definition of what a False No. 9 does? I recently read one that claimed that the best example of a False No. 9 is ... Lionel Messi. Meaning, I suppose, that Messi’s play can be reduced to the tactical banalities of guru-talk.

Are we really expected to take that seriously? One of George Orwell’s political put-downs springs to mind: “One has to belong to the intelligentsia to believe things like that: No ordinary man could be such a fool.”

A False No. 9 cannot exist, the term itself is meaningless drivel (I await the next development, the False False No. 9). If the gurus feel they have discovered a new playing position, then they should give it a new name. They’re capable of doing that -- even of coming up with something both informative and agreeably witty.

But being sure of what it is you’re trying to define comes first. Back to those words, words, words ...