Going to a ghost game: A strange spectacle of soundless stands and a sad Krazy George

The latest edition of Germany's preeminent dictionary, Der Duden, added 3,000 words. The new ones include several from English, such as Hatespeech, Uploadfilter and Lockdown. Also debuting is a word that emerged from German soccer: Geisterspiel. 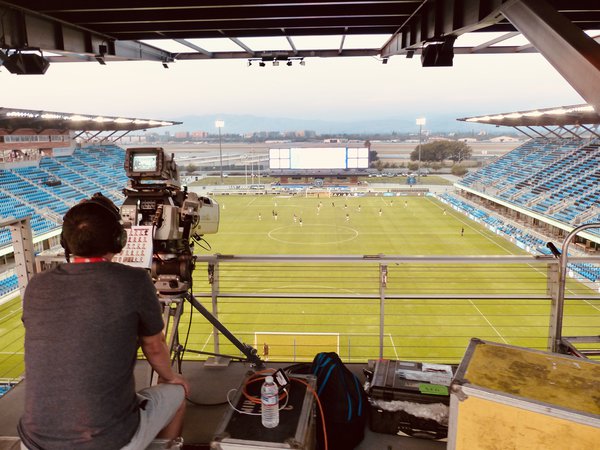 Geisterspiel, ghost game in English, entered the common lexicon as the Bundesliga in mid-May became Europe's first major league to return to play amid COVID. Preventing the virus' spread required games without fans, "behind closed doors" as one says in English. The German for that is, Unter Ausschluss der Öffentlichkeit, so it's easy to see why the term Geisterspiel caught on. (fyi: all nouns are capitalized in German.)

Ghost games soon came to the USA in Major League Soccer, the NWSL, and other sports. Bundesliga clubs could host their own ghost games, but the haphazard U.S. response to the virus forced American sports leagues like MLS into "bubbles." After MLS is Back concluded on Aug. 11, the league returned to stadiums around the country in late August. MLS clubs continue to play behind closed doors, besides a handful in areas in states with looser COVID restrictions that allow limited attendance.

Last weekend, I attended by my first ghost game, when the San Jose Earthquakes hosted the Colorado Rapids.

Those allowed into the grounds are separated into three tiers. Tier 1: the team, team staff (eg: medical, equipment), and referees. Tier 2: staff (eg: security, certain broadcast personal) who are tested every other day. Tier 3: non-tested attendees, including a small group of media, who fill out a health form and get temperature-checked upon arrival. Different colored credential lanyards -- green, yellow and red -- identify those in each tier.

Tier 2 members, always wearing masks, cannot come within six feet of Tier 1 people. Tier 3s, always wearing masks, are completely separated from Tier 1 (and should never be closer than 20-feet). Tier 2s and 3s stay farther than 6 feet from each other. The setup made it seem highly unlikely that a Tier 3 like me would come close to crossing paths with another Tier, and the Tier 1 area was entirely off limits. Postgame interviews are done via video.

It's impressively well-organized. The experience, however, feels ghostly from early on, miles away, because of the lack of cars. For the first time in my life I pined for a traffic jam -- the kind caused by fans wearing replica jerseys and waving flags. Being among fans on the way to the game -- the best is on a subway -- creates that first sense of excitement.

The empty parking lot reminds one so much of what's missing: the scent of various grilled foods, tailgaters who seem optimistic no matter how much their team is struggling, and the inevitability of running into an old acquaintance. It's impossible not to focus on what's absent, especially excited children and the diverse audience that Quakes games usually attract.

The only noise after kickoff comes from a giant north end zone drum -- and yelling from coaches and players. The Quakes do have a giant screen outside the stadium and about 50 cars of fans show up for drive-in viewing, occasionally honking horns.

At ghost games, spare balls propped up around the field's parameter replace ballboys.

I had been curious on how a fanless game affected the refereeing. Player and coach dissent is more more audible to the ref than it would be with a crowd, but it seemed more awkward -- with a youth game quality -- than intimidating. I imagine it less unsettling for a ref to be screamed by a few individuals than getting pounded by the high decibel disapproval from thousands. Dissent from the field also didn't last as long as it might be with the support of a roaring crowd.

I'd been told by Bundesliga observers during the early ghost game phase that players got up quicker after being fouled because exaggerating the pain without a crowd reaction had less effect. I haven't researched that but it seemed to be the case.

Without the crowd noises, you hear all the player and coach "communication." They shouted much more during a game than I expected. I had figured coaches didn't have to tell professional players where to position themselves. Did the coach forget to cover marking on corner kicks at practice so he has yell it out during the game? But I reminded myself of my theory that coaches' sideline histrionics are more the cameras. Trying to prove they're playing an important role in the game. Or pacing around and screaming is how they work off their nerves.

"Don't turn!" from a player made sense because Chris Wondolowski may not have noticed a foe on his back. I expected much more profanity but I imagine by now they realize how audible the words are in an empty stadium to TV microphones.

When MLS returned to play with the Orlando bubble tournament, after a slow start, the games got very good. I enjoyed watching the tournament immensely after the long break from live sports, as I did some international ghost games on TV with the piped in crowd noise. To be in an empty 18,000-seat stadium -- I was in a press box physically distanced from three others -- and to watch soccer without fan cheers, jeers and chants is like watching a practice. I didn't like the concept of fake crowd noise for TV broadcasts, but it works. 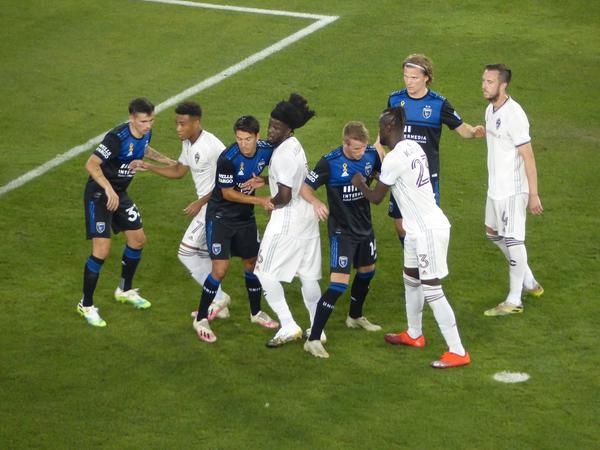 Impressive was how the players seemed unaffected by the fans' absence, as one saw no evidence that their efforts were any less than had the stands been full. Which makes sense, of course, when one thinks of pickup games by amateurs who act like a World Cup is at stake. What lacked were signs of fun. Outside of the player celebrations following the two goals -- it ended 1-1 -- this was a joyless affair. It takes the roller-coaster of emotions from fans to turn a pro sports event into a festival.

There's more to it, of course, for why attending a ghost game becomes depressing. Watching soccer on TV now, it's possible to put out of my mind for a while the devastation inflicted by the virus. It's impossible to ignore the state we're in because of COVID when you're surrounded by 18,000 empty seats or walking past the shuttered concession stands. 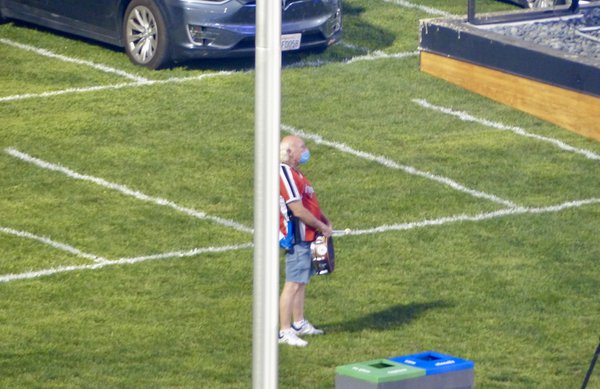 I was fascinated that some Earthquakes fans drove to the stadium for the drive-in experience and as I tried to count the cars through my binoculars I saw a familiar figure, with curly white hair on the back of his bare head, and that drum in his hand. It was indeed Krazy George, the famous cheerleader who started going to San Jose Earthquakes games -- they paid him $35 to rouse crowd after he became famous at San Jose State football games -- in 1974 when the Quakes launched in the old NASL. Krazy George Henderson is 76 now. With mask on, he was hanging out in the drive-in fan section watching the game -- and I assume banging his drum off and on to incite horn-honking. Whenever I spotted him he was just watching the game, and although I was far away, he looked sad.

One of my favorite things to do since I was 6 years old has been to go to a soccer game, so I had really looked forward to attending a live pro soccer game again. But I underestimated how eerie a ghost game experience would be.

The most encouraging part of the experience was how efficiently it was organized to prevent the virus spread. The prudent and cautious approach to holding an event amid COVID was reassuring because I believe such an approach is necessary to return to how we want to experience pro soccer again.

I must admit I used to consider Krazy George's drumming and shouting distracting, and snobbily considered it an American sports cheerleading approach not suited for soccer. Now I so hope it won't be too long until he's back in the stands full of fans.