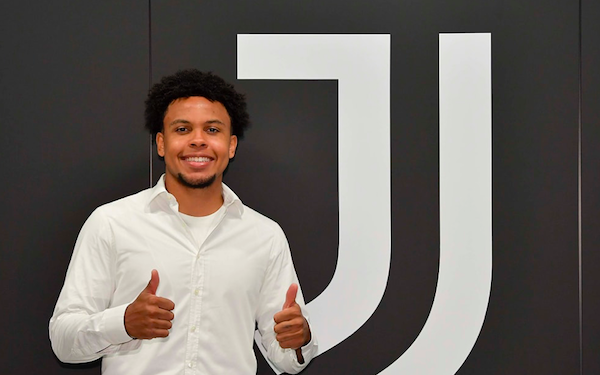 It's not every day that an American gets a formal presentation at a big European club, let alone a club like Juventus.

On Monday, the nine-time defending Serie A champion introduced Weston McKennie to the Italian press nine days after his signing from Schalke 04.

The moment was not lost on the 22-year-old midfielder, who signed a one-year loan deal.

"It is a great honor to be the first American player in the history of Juventus," he said. "Having the opportunity to wear this shirt, representing my country and bringing young Americans closer to football makes me proud."

McKennie will also be the first American to play with Cristiano Ronaldo since Tim Howard was the Portuguese star's teammate for three seasons at Manchester United.

“Playing with Cristiano Ronaldo, seeing how he moves and how he works will bring me great benefits," said McKennie.

Breaking into the Juve midfield won't be easy.

The Bianconeri, who open Sept. 20 at home against Juve face Sampdoria, return 22-year-old Uruguayan Rodrigo Bentancur and 25-year-old Frenchman Adrien Rabiot. Bentancur was one the best midfielders in Serie last season. Rabiot earned a recall to the French national team for the first time since refusing to accept an alternate's role on the 2018 World Cup team.

Brazilian Arthur arrived from Barcelona in the deal for Miralem Pjanic, while 20-year-old Swede Dejan Kulusevski was Serie A's Young Player of the Year on loan to Parma. Italian Federico Bernardeschi is currently sidelined with a thigh strain. French World Cup champion Blaise Matuidi has already joined Inter Miami, and veterans Sami Khedira and Aaron Ramsey could be on the move.

Pirlo's first preseason camp has been broken up by UEFA Nations League qualifying, but he says he has been working with Juventus players doing a better job of winning the ball back.

“Looking at the last Champions League," he said, "the teams that went all the way were the ones who were trying to recover the ball in the shortest possible time. That must be a characteristic that distinguishes us.”

“My strong point? The recovery of ball possession,” he said. “I talked to Andrea Pirlo and he appreciates this feature. We are on the same wave length as to my position on the pitch."