The youth league run by Major Soccer League will be known as MLS NEXT and the inaugural season of the venture that was announced in mid-April will kick off with 115 games this weekend.

Because of COVID-19 restrictions, only 51 of the 113 clubs will be in action in Week 1 play. To adjust to changing health and safety recommendations, MLS Next will create and announce schedules in four-week phases.

The league's 113 clubs, 30 of which are MLS academies, will field 489 teams in six age groups (U-13, U-14, U-15, U-16, U-17 and U-19). The first weekend's action is limited to areas in which state and local governments have lifted COVID-prevention restrictions on youth sports and to clubs near enough to opponents not under restrictions.

"The 2020 competition structure for MLS NEXT prioritizes athlete, staff and community health and safety through regional play and minimized travel," read the MLS press release. "Competition will highlight local rivalries and eliminate air travel and overnight trips, with select matches to be played at neutral sites in geographically centered locations."

MLS stepped in to organize the league in the wake U.S. Soccer folding the Development Academy, the demise of which became official on April 15. 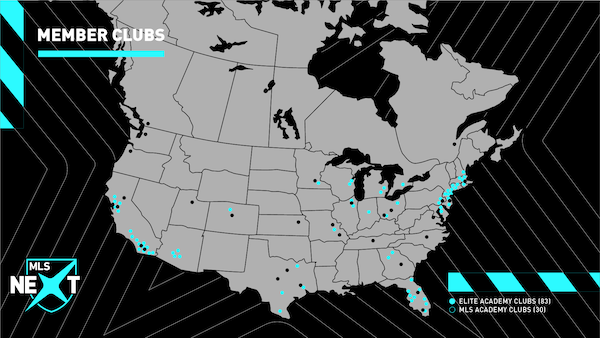 For a list of MLS NEXT clubs, go HERE.

MLS NEXT has clubs based in 30 U.S. states (including the District of Columbia) and three Canadian provinces.

Clubs from 17 states will be in action during the first weekend of play. California, with 24 clubs, is one of the states in which guidelines for youth sports to resume during the coronavirus  pandemic do not allow for youth soccer league games.

The three Canadian clubs -- Vancouver Whitecaps, Toronto FC, Montreal Impact  -- are based farther from each other than U.S. opponents, and a ban on discretionary travel across the USA’s northern border because of the USA’s "unacceptably high" U.S. Covid numbers remains in effect. (The USA has had more 6.3 million cases vs. Canada’s 133,000 and the per-1,000 trend over the last 14 days has been 12 in the USA vs. 1.2 in Canada.)

MLS NEXT is working with clubs in areas with limited access to games because of the minimized travel during COVID-19 pandemic and plans additional local games for such clubs.