The Oakland Roots, who launched in the NISA in 2019 and sold out all its home games, will join the USL Championship for the 2021 season. The move was made possible thanks to the Roots acquiring the territorial rights that had been held by real estate developer Mark Hall, who ended his quest to launch in the Bay Area. 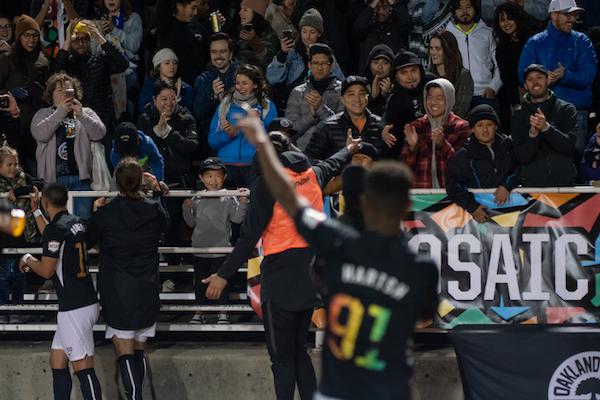 Hall acquired the USL territorial rights over a large swath of the Bay Area in December of 2017. In March 2019 he entered into an 18-month "Initial Exclusive Negotiating Agreement" with the City Council of Concord, which lies 25 miles northeast of Oakland, to develop a 17,000-seat soccer-specific, and, according to The Concord Pioneer, the project would include hotels, a convention center, multi-family housing and retail/office/commercial development.

Said USL CEO Alec Papadakis in 2017: “We have full confidence in Mark’s vision and plan to bring professional soccer to the East Bay, given his track record of success in real estate investment and development across the country."

Hall Sports Ventures relinquished its negotiating rights with the City of Concord in March of 2020. While in the meantime Hall had shown no signs of creating a soccer team, Oakland Roots began their project in July of 2018 and established ties with all branches of the Oakland area soccer community, including inner-city programs.

The Roots played at Laney College Stadium at the edge of Downtown Oakland, featured popular Oakland-based entertainers for pregame music, and attracted sellout crowds of more than 5,000 to all five home games. They also partnered with the Oaklandish fashion line to create merchandise and their logo has become ubiquitous in Oakland.

“We are excited to join the USL Championship in 2021,” said club Chair Steven Aldrich. “Playing in the Championship is a great opportunity for Oakland Roots to continue our journey of using soccer as a force for social good. We can’t wait to showcase the passion, pride, and commitment of our players, fans, and The Town to an even wider audience next year.”

The Roots plan to continue playing at Laney College, whose football team has been featured in the latest season of Netflix's series Last Chance U.

Following the 2019 NFL season, the Raiders left Oakland for Las Vegas. After 47 seasons in Oakland, the NBA's Golden State Warriors moved across the bay to San Francisco in 2019.

“Oakland Roots Sports Club is one of the most impressive and purpose-driven organizations in the United States. We are thrilled to welcome them into the Championship,” said Papadakis said. “When we think about the kind of clubs that can help drive our league forward, we look for committed ownership and fantastic community support. Oakland Roots possess those things in abundance, and we have no doubt they will be a huge success in our league going forward.”