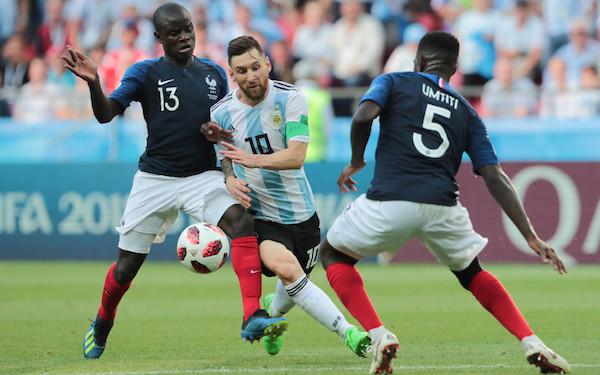 When the 70th FIFA Congress meets on Friday, there is one issue which, if not the elephant in the room, will very much be on members’ minds.

Just how during an ongoing pandemic global pandemic are the six confederations going to find the time to complete the qualifying process for the 2022 World Cup under the current home-and-away format.

With 135 games already played and another 650 to go, the last thing soccer bosses needed was the North American body, Concacaf, last week scrapping its autumn qualifiers and delaying everything to the spring.

Its southern counterparts, Conmebol, who may well go the same way, have the added complication that most of their players are based in Europe and the risk of infection by criss-crossing the Atlantic is not going to sit well with their clubs.

Can you imagine Lionel Messi, Neymar or Sergio Aguero coming back from international duty in South America and telling their coaches they have to quarantine for two weeks?

Likewise, the Asian Football Confederation (AFC) has also pushed everything back until next year while still only on the second round of its group-stage qualifiers

Only UEFA, Oceania and CAF (Africa) can still be fairly relaxed about putting off their matches until 2021 because of their easier qualifying formats.

So what’s the answer when the danger is that you wait until the spring and there’s a second, or even a third, COVID-19 wave that puts everyone back to square one?

According to a well-placed soccer insider, the three most at-risk confederations need to act now by scrapping the 10-day FIFA windows for home-and-away matches.

Instead teams should be brought together in one centralized  location -- as happened with the Final 8 competitions that UEFA organized to complete the Champions League  and Europa League – for three 20-day windows, he said.

For example, the 10 Conmebol countries could meet in Spain and Portugal because of cultural ties to the region and play the matches in June/July, September/October and January.

“There are no fans anyway so what’s the point of dragging teams all the way from Europe to South America?” said the source.  “All those empty stadiums and all that risk of getting infected through international travel. The clubs will start complaining, especially if their players have to quarantine when they get back.

“I can’t see things normalizing in 2021, and playing matches in a centralized format is the only way to go. But the confederations need to start planning for that now, they can’t wait until the same problems happen again in the spring. The only thing we know with absolute certainty is that we don’t know what’s happening next week.”

For TV money purposes the confederations, who get $10 million a year from FIFA, would prefer to play the same number of games but may ask for compensation if they have to reduce the two-leg format.

The soccer administrator went on to explain that the World Cup would have to go ahead as planned because FIFA depends on it.

FIFA predicted last month a $120 million drop in revenue until 2022 due to the financial impact of the coronavirus pandemic, mainly because of the postponement of the new expanded Club World Cup that was due take place in July 2021.

Talking about how the centralized format might work for Conmebol he went on: "Let’s look at South America which has 90 matches if they keep the same format. That is played over 18 FIFA days, or nine pairs of FIFA days as it is currently structured." The current two-game windows October 2020, November 2020, March 2021, June 2021, September 2021, October 2021, November 2021, January 2022, March 2022. Conmebol has the added complication of having the 2021 Copa America scheduled for June 11-July 12, using the latter two dates in the June 2021 double window for the start of the tournament that other confederations will use for World Cup qualifying.

“So right now, South America must find 18 dates. Let’s say they have those matches in a central location to avoid travel. If we have three 20-day FIFA date windows -- in July and September ’21 and January ’22 – they can play 15 matches. They will have three games left which could be played in March 2022, which is a FIFA date, anyway.”

Compared with Conmebol’s 10 countries, the AFC has 40 teams still alive, split up into eight groups of five. Only midway through the second-round group stage, it too has been forced to push back all remaining 2020 matches to 2021.

One option as a centralized venue for the AFC could be Qatar, which is hosting the World Cup in 2022. Four stadiums have already been completed there, and the tiny Gulf state has just started hosting the remaining 39 matches of the AFC Champions League with the final on Dec. 19.

The Concacaf matches would mostly have to be played in the United States because it has the best training facilities and best weather.

The source added: "Basically, at this point anyone looking at the calendar and their own situation, it doesn’t take a genius to put two and two together and say: ‘We cannot really follow what we started.’ The whole world should have some sort of unified international calendar, but not the existing one. The existing one doesn’t make sense under the current circumstances, it’s not going to happen. It’s impossible.”