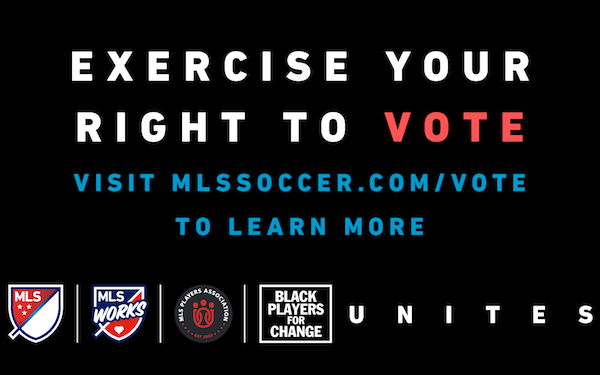 Major League Soccer has joined with Black Players for Change and the MLS Players Association to launch MLS Unites to Vote, a non-partisan initiative to help players, staff and fans register to vote and participate in this year’s election.

MLS will work to leverage its platforms to educate communities to promote National Black Voter Day (Friday) and National Voter Registration Day (Tuesday) and inform citizens about the voting process, voter registration, volunteerism on election day and the efforts of MLS clubs and players.

All MLS front offices and U.S.-based club facilities will be closed on Election Day to allow everyone in the MLS community to exercise their right to vote and serve their community as a poll worker or nonpartisan election volunteer. The BPC identified voter registration as a major point of emphasis of its efforts to foster change.

“Participation in local and national elections is one of the most important responsibilities we have as citizens. Major League Soccer and our players recognize the opportunity we have to leverage our platform to amplify the importance of voting,” said MLS commissioner Don Garber. “We hope to inspire MLS fans and the entire soccer community to educate themselves about the voting process, register to vote, and vote on Election Day.”

MLS will work with Power the Polls, a nonpartisan initiative working to recruit a new generation of young, diverse poll workers. It is also a member of the Civic Alliance, a nonpartisan network of more than 200 companies working together to encourage voter participation.

Here are some of the initiatives clubs have done or are working on ...

Atlanta United. It launched United We Vote with a focus on voter education, registration and participation. It will have all 11 eligible players registered to vote by Tuesday.

Columbus. It will host a resource hub on its website linking to VoteOhio.gov and will hold a social media campaign on Voter Registration Day, as well as create content with U.S. players to encourage fans to vote.

Houston. The Dynamo is working with the City of Houston and Harris County to raise awareness about voter registration through public service announcements and ongoing club digital support.

LAFC. Banc of California Stadium will be the first athletic facility in Los Angles to serve as a registered polling location. LAFC is working with Los Angeles County to help recruit volunteer poll workers and is encouraging club staff to serve as poll workers.

Minnesota United. Allianz Field will be used as the main ballot drop-off location for all of Ramsey County, the second-largest county in Minnesota for the general election.

NYCFC. POWER the Vote was created in collaboration with the NYCFC-supported Youth Leadership Council around social injustices across local communities and the nation.

NY Red Bulls. Employees are creating Voter Education Kits as one of the club’s 11 Days of Service  initiatives. The kits will help educate communities about all aspects of the local voting process.

Philadelphia. The Union is creating a digital experience to encourage voter registration and provide information about key upcoming dates for Pennsylvanians that need to register to vote and request mail-in ballots.

Portland. As part of the overall messaging campaign across their platforms, the Timbers and Thorns are creating a special “Vote” tee for both teams.

Seattle. The Sounders fans can visit SoundersFC.com/Vote to find links to complete their census, register to vote and sign up for election reminders. The tarps in the stadium stands, used as a safety measure to ensure distancing from the field, will include a “Vote/Vota” design created by local artist, activist and app-developer, Teddy “Stat” Phillips. CenturyLink Field will continue to serve as an official Vote Center for King County, with residents able to register to vote, cast their ballot, drop off mail-in ballots and receive other election-related assistance.