Gonzalo Higuain: 'My goal is to continue playing great futbol' 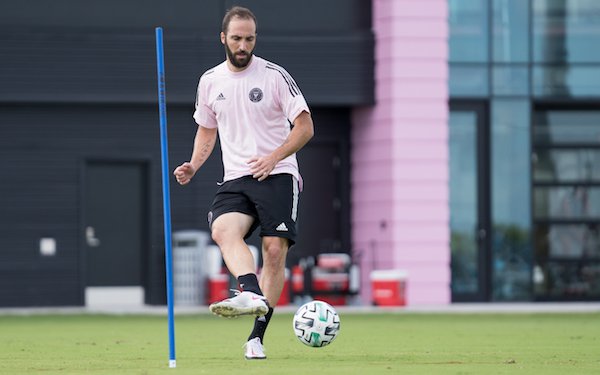 Argentine Gonzalo Higuain, winner of three LaLiga and three Serie A titles and holder of the Serie A record for most goals in a season, has signed with Inter Miami as a Designated Player.

Higuain spent seven seasons in Spain and seven in Italy with a short loan spell in England in 2018-19. He won Serie A titles with Juventus in the three seasons he was with the club, including the 2019-20 season. He has scored 31 goals in 75 appearances for Argentina, which included three trips to the World Cup.

Juventus agreed to buy out the final year of Higuain's contract to get him off its books. He spent the 2018-19 season on loan to AC Milan and Chelsea and scored just eight goals in 2019-20 back at Juve, marking the first time in 12 years he didn't reach double digits in goals in a season.

Higuain set the Serie A record of 36 goals while playing for Napoli in the 2015-16 season. The record was matched this summer by Lazio forward Ciro Immobile.

“I feel good," he said of his move to MLS. "I feel whole as a player. I’m motivated to try a new league and help the team grow. Individually, my goal is to demonstrate that I can contribute and continue playing great futbol here, and I hope I can achieve that because I have all the tools necessary to succeed. Inter Miami is a team in construction but there is already a good base to reach important goals."

Higuain follows in the footsteps of his brother Federico, who has played nine seasons in MLS. While he is an Argentine international, he was born in France, where his father Jorge played for Brest in the 1980s.