Rick Flores  spent 20 years in the United States Marine Corps. He worked with infantry units, as a game warden and on leadership projects. He was also a drill instructor. 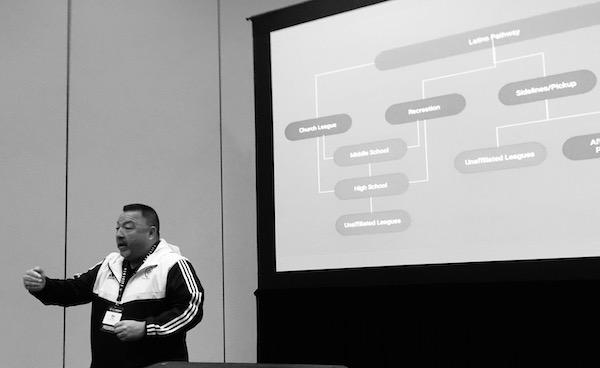 As a Marine, the Fresno, California, native also found time to play and coach soccer. Among others, his teams faced their counterparts from the Army, Navy and Air Force. Flores got the coaching bug in matches like those.

As a Marine Corps drill instructor, Flores was used to barking orders. In his soccer posts however, he firmly believes that the best way to impact people is through education and collaboration. He is in the business of helping soccer grow, by growing coaches who teach the game to others.

The technical director’s job, he says, is to be “the face of a state association. It’s to be a mentor, a leader. You motivate younger coaches, by giving them access to information.” New Mexico is a large state. Flores travels far and wide, from NMYSA’s headquarters in Albuquerque, where the USL United club New Mexico United packed Isotopes Park in its first season. (Yes, the name is an homage to the 2001 “Simpsons” episode, in which Homer stumbles on a plot to move the Springfield Isotopes baseball team to Albuquerque.)

There’s a thriving soccer scene in Santa Fe. The game is also played all over the Land of Enchantment. Flores works with clubs as far away as Las Cruces, near the Texas border with El Paso.

He took over as technical director last September. He was still introducing himself to coaches in smaller towns around the state when COVID-19 struck. That scuttled his plans to visit Native American reservations.

“I’m a shaking hands, kissing baby type,” Flores notes. “I like doing clinics. It’s been tough not being able to get out and meet people.”

So he reaches out in different ways. He communicates often by memo, sending information to club presidents and directors of coaching. He’s also presented webinars.

“People are hungry for information,” he says. “There are pockets of New Mexico where only 100 kids play. But those places are just as important to spread information. This is a big state in area, but it’s small in the number of players.”

It’s also poised for growth. County and youth sports officials are building a 180-acre, 32-field complex in Mesa del Sol, near Albuquerque. It could raise the visibility of soccer in the state, become a regional center for tournaments and events, and drive economic growth.

However, when the coronavirus struck, New Mexico soccer “completely shut down,” Flores said. It’s only now beginning to open back up. Still, he estimates, perhaps half of the usual number of players will be on the field this fall. (New Mexico United, the USL team, has had to play its games out of state.)

Without spring registration fees, NMYSA furloughed its entire staff – including him. But Flores volunteered his time during that hiatus, to keep coaching education going in the state. A technical director must be “flexible and educated," he says. Coaching methodology is not static. It’s also important to understand the differences between levels. An Olympic Development Program coach has different educational needs than a grassroots coach. A bigger club has different resources than a smaller one. But in the end, he notes, “it’s all about soccer.”

Flores is an active participant in United Soccer Coaches’ Latino Coaches’ Advocacy Group. As with his full-time job, his mantra is the importance of coaching education.

“We can get stuck in our ways. We don’t necessarily want someone to show us a different way of doing something,” he says of his colleagues. “But there are lots of good ideas out there. We’re sharing the best ways of doing things.”

Just as he does throughout the vast, beautiful state of New Mexico.