Nightmare performances around MLS: 'Bunch of frauds' and 'mentally weak' 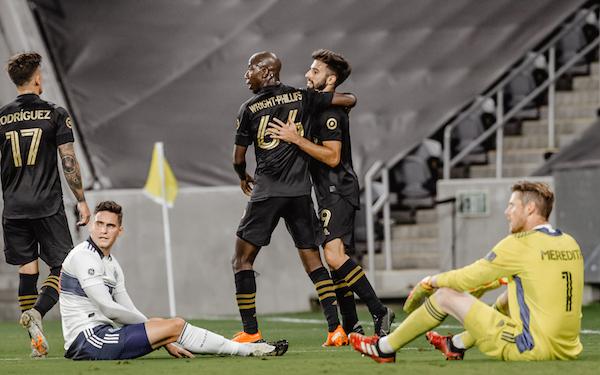 On a night when all 26 teams were in action, three teams stood out -- for their futility.

D.C. United and San Jose, the last-place teams in the Eastern and Western Conferences, lost yet ahead, while Vancouver fell after conceding an MLS record four goals in the first 14 minutes at LAFC.

D.C. United has won just two of 13 games after its 1-0 loss to Nashville SC. The lone goal came on a goal by Mexican Daniel Rios in the 70th minute, but United head coach Ben Olsen was more upset with how his team played in the first half.

“We were a bunch of frauds in the first half,” he said. “Unacceptable performance from us. It was uninspiring."

The Earthquakes are on course to shatter an MLS record for the most goals-per game allowed -- it's currently at 2.92, half a goal a game higher than the record set by the 2001 Tampa Bay Mutiny -- and head coach Matias Almeyda doesn't seem confident that things will get better quickly.

“I try to be real and objective in my life," he said after the Colorado game. "There are 10 games left and they’re going to be as difficult as these games. We’re not going to change in three days and have the magic wand to touch the players.”

Vancouver's 6-0 loss to LAFC was marked by four goals in the first 14 minutes and two own goals. The first, credited to Vancouver defender Ranko Veselinovic in the 14th minute, denied what appeared to be a nine-minute hat trick by Bradley Wright-Phillips; the second was scored by Andy Rose, whose father-in-law in LAFC head coach Bob Bradley.

"The first 14 minutes looked like it was going towards a huge nightmare," said Whitecaps coach Marc dos Santos, who spent LAFC's first season in 2018 as an assistant under Bradley. "We were late to everything. We were not focused. The first two goals from corner kicks were situations, easy to control. And then when you're 4-0 down after 14 minutes, you have to make sure that at least you stop the bleeding. Because the reality was we're not going to win this game, 5-4."