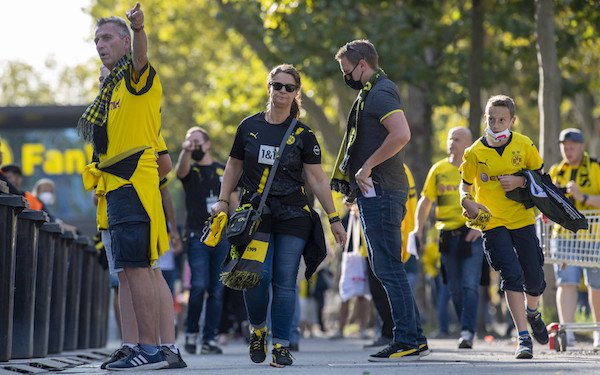 Atlanta United, Nashville SC and the Colorado Rapids are the latest MLS teams to announce plans to reopen their gates.

It will take place in Phase III of the return to home markets and up the total number of MLS teams that will have welcomed fans in some limited form to 10.

They include the Montreal Impact, which allowed 250 fans for its games before it moved south of the border to play its MLS games because of Canadian travel restrictions.

The irony is that MLS stadiums are reopening while plans to welcome fans at some European stadiums have had to be scaled back or postponed in response to a spike in COVID-19 cases in many European countries.

France. Ligue 1 did not finish the 2019-20 season but was the first major European league to reopen with fans in the stands in August -- a maximum of 5,000 individuals (most of them fans) in all but rare cases.

But the increase in COVID-19 cases in France, where the seven-day average of new cases per 100,000 is now higher than all but 16 U.S. states, all in the South and Midwest, forced the French health ministry to announce new restrictions on Wednesday night.

French areas on red alert have capped gatherings of 5,000, but that number has been reduced to 1,000 in 11 metropolitan areas with higher rates of COVID-19 cases and in some cases an outright ban on public gatherings. Marseille was awaiting word whether it will have to play Saturday's match against Metz at the 67,000-seat Stade Velodrome behind closed doors because its prefecture is on maximum red alert.

England. There has also been a COVID-19 spike in Britain, where Prime Minister Boris Johnson described the situation as being at a “perilous turning point." A record new 6,634 cases were reported on Thursday, the first night when new restrictions went into effect for pubs, bars and restaurants in England and Wales, where they are limited to serving in-house customers at tables and must all close at 10 p.m.

The Premier League was planning on welcoming back supporters as of Oct. 1 at a maximum capacity of around 25 percent to 35 percent, depending on social-distancing guidelines, but those plans have been put on hold, as well pilot programs to welcome small groups of fans at sporting events.

Germany. The Bundesliga began to welcome fans last weekend at games where local levels of new COVID-19 cases were low.

Borussia Dortmund had 9,300 fans for its 3-0 win over Borussia Moenchengladbach, but Bayern Munich and FC Cologne had to play home games without fans.

(Bayern was warned by the German federation when photos showed its executives standing together in the stands not practicing social distancing and not wearing masks.)

The German government's threshold for allowing fans is 35 new cases per 100,000 inhabitants over a seven-day period in the host city -- so restrictive by American standards that only five U.S. states -- Vermont, New Hampshire, Maine, New York and Connecticut -- would currently meet it.

Spain. LaLiga resumed two weeks ago as it left off in July -- without fans. Teams had hoped to welcome Spain had hoped at maximum capacity of 30 percent, but those plans went out of the window as cases soared since mid-July.

In parts of Madrid with some of the highest rates in the world, a lockdown went into effect on Monday with the reintroduction of shelter-in-place rules and the closing of parks.

Italy. Italy was the epicenter of Europe's COVID-19 outbreak in the winter, but it now has one the lowest rates of new cases, just 19 per-100,000 over seven days.

But like with the rest of Italian life, Serie A reopened cautiously last weekend with just 1,000 fans allowed at matches.