As soccer reboots, reffing requires managing a variety of guidelines

Here in New York State, youth soccer was able to start training on July 6 with games rebooting on July 27. Yet there continue to be sensible restrictions on games as teams from outside the state’s region (Long Island is one region, New York City is another, etc.) and outside the neighboring county cannot travel to play an opponent.

All the games I have officiated in the past month have been under the umbrella of U.S. Soccer and U.S. Youth Soccer. The coaches and all the substitutes are supposed to be wearing masks. Although I’ve noticed the coaches complying, their subs have not. It’s arguably the easiest way in a soccer setting to catch the virus, to be sitting next to another person and neither one wears a mask. That and team huddles before the half where the players do a loud cheer at the end -- so I don’t know why they continue to do them.

Although very few subs have been wearing masks, I have noticed two teenage boys on different teams wearing masks throughout the game, including when they were playing.

The teams have not been lining up for post-game handshakes and many leagues are requiring the teams (players, coaches and their fans) be on opposite touchlines. So I’ve had to be aware that subs could be coming in from opposite touchlines and look at the halfway line on both sides before restarting play.

With teams on opposite touchlines, as an AR I am always wearing a mask as I personally do not feel comfortable standing next to players without it, such as those waiting to go in to the game and standing by the halfway line. As I wrote in a previous article, running with a mask on seems to restrict breathing. U.S. Soccer says “to discuss with your Primary Care Physician if any medical conditions predispose you to avoid the use of a face cover while participating in physical activity.”

Yet there is different guidance from local high school soccer. In late August, Governor Andrew Cuomo gave  the green light for school soccer practice to restart on Sept. 21 with games to be played starting in October. But the guidelines have players wearing masks, whether on the field or on the bench, with mask and hydration breaks in each half.

Even with these precautions, some leagues do not feel it will be safe for their players so they have opted to try and play the high school soccer season in the spring when hopefully there will be a vaccine.

My college schedule was cancelled for this fall so I’ll hope my games will be played in the spring. Yet a few college games are being played as the ACC, Big 12, SEC, Sun Belt and Sun Conference (NAIA) are competing this fall. 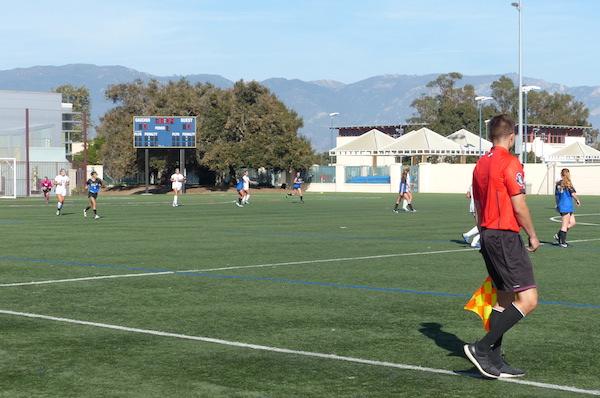 If I’m assigned a series of games and switching from ref to AR, I am having the ARs use their own personal flag even if it does not match the other AR’s flag. A rationale behind this is I’m reffing with another official giving me the flag when they ref. I’m holding the same flag. Then if I ref another game, I’m putting a whistle to my mouth which seems like a possible risk to avoid by simply having ARs use their own flag.

Finally, the Massachusetts Youth Soccer Association has come up with return-to-play guidelines that make the sport look very different with no heading, no slide tackles within six feet, no corner kicks directly into penalty area, no walls on free kicks, no dropped balls and kick-ins instead of throw-ins. The guidelines come from a state mandate regarding contact in recreational sports.

Player frustration generally come from not allowing more contact when I’m reffing futsal on a hard surface such as a gym so I could imagine how soccer players in Massachusetts feel about rules that the other states are not following. But at least they are able to play soccer games again (albeit an alternate version of the sport) unlike those in many other states.