The world of pro soccer is not where you go if you’re looking for objectivity, and unbiased opinions.

Fan loyalty, club loyalty, player loyalty, regional loyalty -- all of that overlaid by a primitive (and often quite unpleasant) nationalism, and then all of that stirred up and stoked by the snake-oil salespersons of the marketing department. Is there any hope of clear, rational thinking in that mess?

There is. Or there ought to be. Among the various soccer-involved groups -- players, coaches, referees, executives, fans, journalists etc -- referees are the ones who need to stand above the influence of all those loyalties. Their job requires neutrality, not loyalty.

And that is what we get from referees -- a quite extraordinary ability to transcend all the different loyalties and to make their decisions free of bias.

Well, that would be nice, but the truth is something less than that. Referees have their own bias -- not an excitable, emotional one (like the loyalties), but one that is carefully based on the written word: the rulebook.

The rules can be studied, they need to be learned -- need, in fact, an almost academic approach. No other approach can be possible if the referee is to avoid the lure of the emotional loyalties.

The loyalty imposed by the rules is technical and disciplined ... and admirable. But it involves a serious weakness. It limits the referee to a restricted, cramped vision of the sport. Call it rulebook soccer.

It is a narrowly focused view of the game, and something like that is probably necessary for the referee to do his job. But there has to be something wrong with it when we have referees so obsessed with the rules that they fail to recognize when serious fouls are being committed right in front of them.

We can get now to the field of play. We’ll start with a trip to London where, last Wednesday, Chelsea played Barnsley in a English League Carabao Cup game. A minute or so before halftime Chelsea forward Tammy Abraham chased a long ball toward the Barnsley goal. He outpaced the Barnsley defenders, so was opposed only by the Barnsley goalkeeper, Brad Collins, who raced forward from his goal to clear the ball. To beat Abraham to the ball, Collins had to run outside his area -- and even then it was clear that Abraham was going to win the race. So Collins simply threw himself, knees raised into Abraham. Collins did not get to the ball, but he made sure that Abraham didn’t by brutally flattening him. 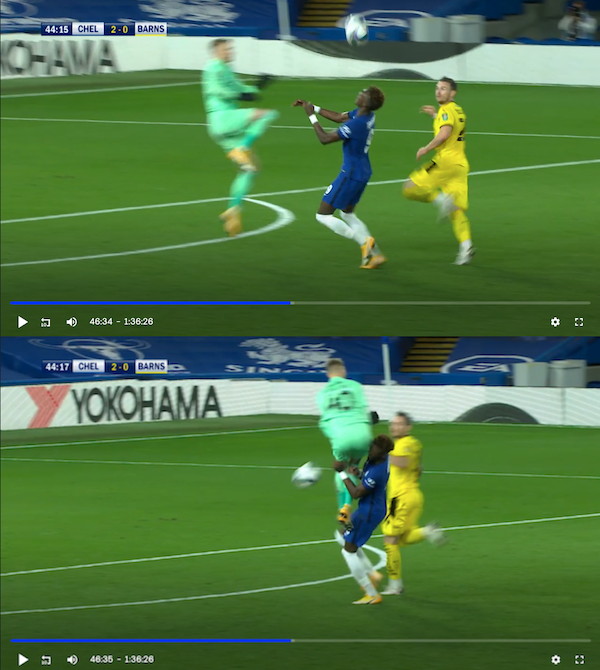 Referee Darren Bond appeared on the scene, in no great hurry it seemed. Abraham, looking shaken, received treatment, but not for long. There was no sign of any concussion protocol being performed. Referee Bond awarded the free kick to Chelsea, and gave Collins a yellow card.

A yellow? Bond had just seen Collins commit a violent and very dangerous foul, and he gives a yellow? But Bond, evidently, had not seen a violent, dangerous foul. He had seen a “coming together” of the two players, made a rulebook judgment that this was merely reckless and did not involve “excessive force,” and probably further weakened his call by reminding himself that red-carding goalkeepers is frowned upon.

Hence the yellow card for an offense that involved plenty of excessive force and glaringly endangered Abraham’s safety. This was as comprehensive a red card as you can get.

In short, an utterly wrong, quite awful call by Bond. Even so, it’s hard to heap blame on Bond -- many referees would have done as he did.

OK -- that was in England. But English refereeing practices are of interest here. Since 2013 pro referees in the USA have been under the tutelage of Englishmen -- Peter Walton (2013-2017) and Howard Webb since then. It is inconceivable that English attitudes have not been transmitted.

On this same topic of referees simply not accepting what their eyes show them, we can take look at the referees’ PRO website.

We’re listening to Greg Barkey, who made his name as an assistant referee in MLS, and now does a weekly analysis of VAR calls in MLS. He’s talking about incident in a Sept. 13 game that finished Vancouver 2 Montreal 4. (The VAR angle does not concern me, here.) 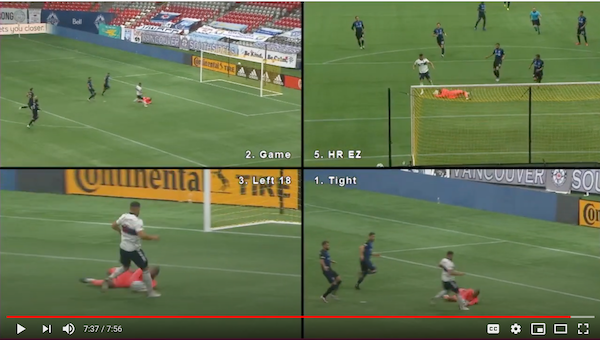 What we see is Vancouver forward Lucas Cavallini chasing a ground ball, and Montreal goalkeeper Clement Diop diving at his feet. Diop gets to the ball first by a fraction of a second. Cavallini’s foot makes contact with Diop’s head. Barkey refers to “this foul” by Cavallini. Cavallini gets a yellow card. Which I totally disagree with. The yellow should have gone to Diop.

Immediately before “this foul” Barkey must have seen Diop diving head first to ground, in front of the onrushing Cavallini.

That is an offense and play should have been halted at that moment. Diop’s offense is “playing in a dangerous manner”, which the rulebook defines as “any action that, while trying to play the ball, threatens injury to someone (including the player themself) . . .” (my italics). It is a yellow-card offense.

Is there a more certain way of inviting injury than diving head-first at the feet of a moving opponent who is looking to shoot on goal?

That is what the referee (Pierre-Luc Lauziere) and Greg Barkey must have seen and which both chose not to see. In this case they are obsessed not by the rulebook, but by accepted referee practice. Which happens to be wrong, a direct contradiction of what the rulebook requires.

The referee bias, this narrow focus on the rules, also includes the interpretation of those rules. A regrettable state of affairs that prevents referees from responding to what their eyes are telling them, to what is really happening. And that permits them to ignore serious and dangerous foul play.

Is it really asking too much of Greg Barkey that he bring up this issue of dangerous play as something that needs clarification?

I don’t see why it should be. Nor do I see any reason why the referee boss Howard Webb (who has been remarkably low-profile lately) should not ask IFAB if it’s OK for his referees to continue ignoring the rulebook on dangerous play by goalkeepers.

After all, would it be such a shocking thing to do, to point out that a sensible rule, one designed to avoid serious injuries, is not being enforced? This is a player safety issue (specifically a goalkeeper safety issue) that could -- and should -- be resolved by a rule banning goalkeepers from diving at an opponent’s feet.