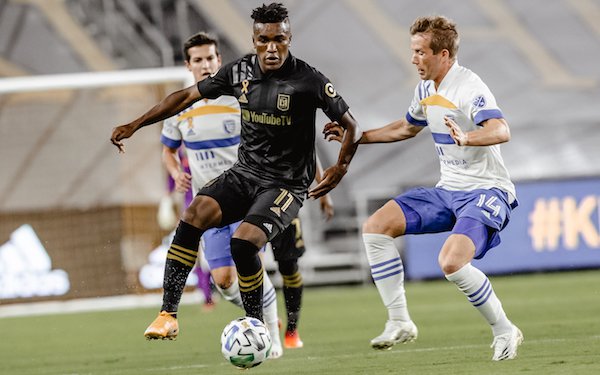 To see how many goals the Quakes would give up to LAFC and what would be the reaction of their embattled coach, Matias Almeyda.

After all, LAFC, which had won every game in its series with San Jose, scored six goals in their win on Wednesday, and the Quakes conceded another five, adding to the worst defensive record in MLS history.

It not only beat LAFC, 2-1, it did so in dramatic fashion, coming from behind on goals by Shea Salinas in the 80th minute and Jackson Yueill with the winner on a backheel three minutes into stoppage time.

The Quakes players in the game and on the bench celebrated like they had just gone ahead in the World Cup final.

“The only thing I ask of the players is that they double down against adversity,” he said. “In life and football, whoever fights is not dead. We have a team with youngsters, a team with many injuries, and today we were able to give happiness to the group, to the fans, to the board -- especially because of the opponent and the uncomfortable situation we have come from, conceding so many goals. The players gave their souls and we went back to what we had part of last year and during Orlando.”

Sunday's win was the first for the Earthquakes since their return from the MLS is Back Tournament, ending an nine-game winless streak that included 7-1, 6-1, 5-0 and 5-1 losses in league play and a 4-1 loss to Minnesota in the MLS is Back quarterfinals.

Almeyda said the difference was that the Quakes rediscovered the energy they had in Florida.

"The unity, the wisdom to accept the moment, and to double down," he said. "Never giving up, and even if we’re on the ground, we get up. This year has been difficult. The team will not stop fighting. The celebration we had tonight, similar to the one in Orlando, shows the togetherness of this team. We do have what it takes to move forward, even considering the reality of our situation.”

San Jose is still in last place in the Western Conference but it is only four points out the playoff zone with nine games to play.