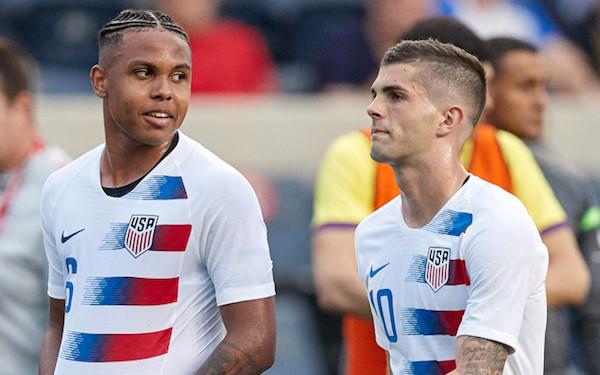 -- The Concacaf Nations League in June;
-- Gold Cup in July; and
-- The start of World Cup 2022 qualifying now pushed back to September with the first eight games likely scheduled to be played in 2021.

(There's also under-23 qualifying and -- potentially -- the Olympic Games themselves in the summer.)

All this is dependent on the coronavirus and how it impacts travel.

Multiple schedule changes. The Concacaf Nations League final four has already been rescheduled twice. The format for the final stage of World Cup qualifying format was changed once by Concacaf from an Hexagonal to Octagonal and within weeks the latter's start was pushed back from June to September with four dates on the calendar unaccounted for.

“There are a lot of competitions, and what that means is that it’s an opportunity for players," said U.S. head coach Gregg Berhalter in a Zoom call with media after Monday night's Concacaf draw for the Gold Cup. "It’s an opportunity for them to show they belong, that they should be part of the first team. No matter what competition we’re in, every time the players step on the field they prove that they can wear the jersey, that they can be part of the group, the squad, whatever that may be."

In some ways, the most recent change in schedule is a good thing for Berhalter. Assuming the USA plays one or two friendlies in November -- a big if -- it will still have two windows for friendly games and the Concacaf Nations League before the start of World Cup qualifying to prepare the team. But it will also have the Gold Cup and potentially Olympics to look at new players competing for spots on the national team during qualifying.

Workload issues. In an ideal world, the USA could field its first team for both the Concacaf Nations League and Gold Cup. But that's not going to happen. The core of the team will be the young European-based stars who'll likely skip the Gold Cup, and Berhalter said the priority remains the interest of the player and how his workload and schedule are handled.

“If I asked you is it reasonable for a player to play a whole season, then go to the Nations League, then go to Gold Cup, then start preseason again without a break, it’s probably not reasonable for that," he said. "We’re going to have to juggle the squad a little bit – we’ll still be competing for trophies – but there will be a certain amount of juggling that we need to do.”

Brutal schedule. In Germany, where many of the top young Americans play, the schedule has been particularly affected. Bundesliga teams playing in Europe will play every midweek and weekend from their return after October FIFA window until Christmas weekend, which they will have off.

The winter break has been eliminated this year, so teams will resume play a week later on Jan. 2. The traditional "Herbstmeister" -- fall champion -- marking the halfway point of the season won't be known until Jan. 24.

The group stage of the UEFA Champions League is usually staged over four months. This fall, it will be played on every available midweek from mid-October until the second week of December. To get Germany's domestic schedule up to date, there will then be one midweek of Bundesliga action and another midweek for the second round of the DFB Pokal, the German Cup, just before Christmas.

The bottom line: the USA's European-based players will be exhausted by the end of the 2020-21 season so it might not be a bad idea that the USA now waits until September to start World Cup qualifying.

All this makes getting the most out of the Gold Cup and expanding the first-team pool even more critical in 2021.