Lorne Donaldson  is the longtime Executive Director of Coaching of Real Colorado, a club that joined U.S. Soccer Boys Development Academy upon its launch in 2007, ECNL Girls when it started in 2009, and the Girls DA upon its creation in 2017. After two seasons of playing in both the Girls DA (winning the inaugural U-16/17 DA title), Real Colorado left ECNL Girls. But before the end of 2019-20 season and U.S. Soccer announcing its DAs' collapse, Real Colorado had announced it would leave the Girls DA and rejoin ECNL Girls for the 2020-21 season. In the wake the Boys DA's demise, Real Colorado fields teams in the new MLS Next league, and ECNL Boys, which launched in 2017. 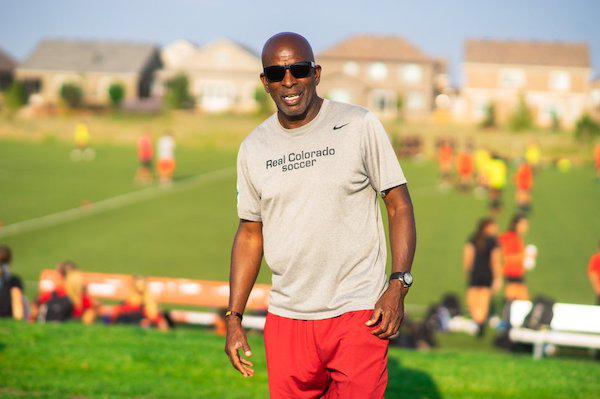 Real Colorado has among the highest rates of sending players into the U.S. national team program ranks. Its alum include Mallory Pugh, Sophie Smith and Jaelin Howell. Another, Janine Beckie, played for Canada at the 2019 Women's World Cup.
* * * * * * * * * *

SOCCER AMERICA: When we spoke in April of 2019, you said the turf war between the Girls DA and the ECNL Girls had created a "toxic" environment. How do you feel about the elite girls soccer landscape today?

LORNE DONALDSON: It got a little bit toxic because everybody was moving in a different direction. They were two leagues that split the talent pool. There are still two leagues with ECNL Girls and the Girls Academy, and even though there are some good teams in the new Girls Academy, I think the talent pool is more favorable on the ECNL side right now than the other side. And I think most of those teams are trying to get into ECNL.

I think some California teams, and some all over the country, will try to go ECNL, because it’s a better run league right now, it’s a lot more established, and you can look at the ECNL right now as the top girls league.

SA: Real Colorado joined the Boys DA when it launched in 2007. Now you're fielding boys teams in MLS Next and ECNL Boys ...

LORNE DONALDSON: I think the Boys DA was fine. Right now, MLS Next is a little chaotic because I don’t think anyone knows where it’s going, there are a lot more teams, and it’s not close to being as organized as the Boys DA.

The Boys DA was very well organized, but I saw the writing on the wall. Once the Girls DA was going to fold, there was no way they [U.S. Soccer] were going to continue with the Boys DA, because we know lawsuits were going to happen. If they could have kept the Boys DA, I would have been 100 percent for the Boys DA.

SA: Do the question marks about MLS Next’s organizational approach have to do with MLS stepping in at the last minute -- in the wake of U.S. Soccer's abrupt withdrawal  -- and the COVID challenges?

LORNE DONALDSON: I think it’s a combination of lack of preparation time and COVID. So I think it’s a three-part: COVID, no time to prepare, but also MLS in the past has been a big proponent of doing their own thing. Most of the amateur teams in the past felt that MLS had already run the [Boys] DA, in the sense that anything they [MLS clubs] said, [U.S. Soccer] was going to do.

Now they had no choice but to step in and try to salvage the league, try to do something. That’s where we’re at right now. They’re trying to run a new league, but COVID is in the middle of it. Some places can play, some places can’t.

SA: What differences do you expect for your boys in MLS Next compared to the DA?

LORNE DONALDSON: We used to play the FC Dallas of the worlds and that was easy travel for us. We used to play FC Dallas, Houston, Kansas City – all these MLS teams. We looked forward to the FC Dallas series for the last 10, 11, 12 years. It was great for the game. They were the top academy in the country and we had some good results against them and usually good games. Now our grouping is different.

I think traveling could be more difficult for us than it was in the Boys DA. We’re going to have more one-off games – travel, play only one game and come back. Traveling may end up costing us more. We won’t know for sure until the schedule is finalized.

Also, there are a lot more teams in [MLS Next] that nobody knows anything about. We don’t know how good those teams are and the competitive level they’re bringing.

We had the series with FC Dallas, and the Solars, that we really enjoyed. I don’t know if our games are going to be as good. Locally we only have the Rapids, and that’s one we look forward to.

SA: What have your MLS Next players been doing since opening the season against the Rapids?

LORNE DONALDSON: We’re trying to keep them busy with scrimmages and friendlies, against the Rapids and other teams looking for games.

SA: But your ECNL teams are able to play a schedule?

LORNE DONALDSON: ECNL Boys is more regional, so they get games in. ECNL Girls can also get official games in because we’ve got four teams in this area: we field two, and there’s the Colorado Rapids and Pride SC. And it's wait and see when we can play games that require more travel, and when teams can travel to us.

SA: Will there be movement between your ECNL Boys and MLS Next teams?

LORNE DONALDSON: If a boy is only border-line ready to play MLS Next, he plays in ECNL, which is more regional. We can call him up for MLS Next. One thing about MLS Next is there is more flexibility to move players than with the DA. There’s less paperwork for everything. 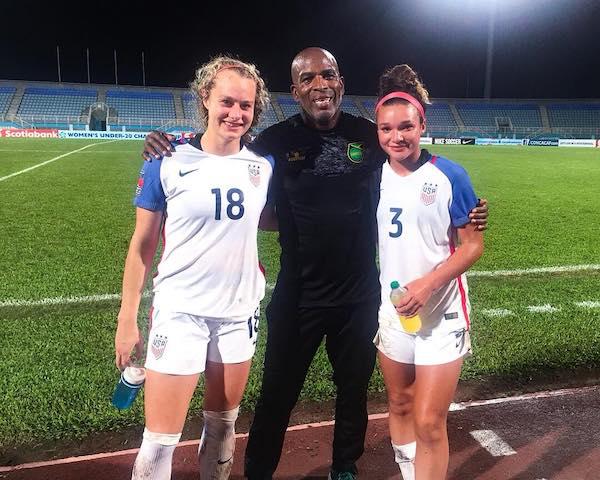 Lorne Donaldson, while serving as Jamaica head coach at the 2020 Concacaf U-20 Championship, flanked by Real Colorado products Jaelin Howell (left) and Sophia Smith of the USA's U-20s. (As freshmen, Howell helped Florida State win the 2018 national title and Smith starred for Stanford as it won the 2019 NCAA crown. Smith now plays for the Portland Thorns of the NWSL.)

SA: Because of COVID, the Colorado boys high school season switched from fall to spring (March 2021 start). Will COVID have an effect on high school girls (a spring season) that will affect ECNL Girls?

LORNE DONALDSON: Yes, because the girls high school preseason usually started at the beginning of March. This season will start in late April, and may go on until June. That conflicts with ECNL and we’ll have to work together with the high schools to make sure the girls aren’t overworked. It’s a wait-and-see situation as far as how it will unfold.

SA: How severe has the COVID impact been on Real Colorado? Did you have to furlough coaches?

LORNE DONALDSON: We were fortunate and were able to keep everyone on. We did get a financial hit because our tournament that attracts more than 600 teams had to be canceled as did our big fundraiser, a casino night that brings in about $100,000. ... And we’ve seen a player participation drop at the younger ages.

SA: How much and why?

LORNE DONALDSON: We lost 25%, 30% of players ages 6 to 10. I think because parents were afraid. We’re hoping things will normalize and they’ll come back. It’s another wait and see situation.