Sunday Focus: A TV deal too good to be true puts French soccer in peril 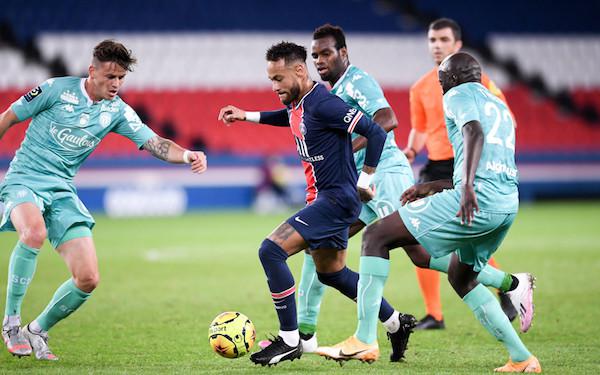 Americans have to shell out more than ever to watch soccer these days.

Few soccer fans probably paid to get CBS All Access before this year. Now, it's home to the NWSL and the UEFA Champions League. Price: $5.99 a month.

Those who paid for cable or streaming services could watch most big Premier League games on NBCSN. Now, many big games have moved to Peacock, NBC's new pay streaming network. Price: $4.99 a month.

The same would apply to Bundesliga fans. German league rights moved from Fox Sports and Univision to ESPN, which is carrying most games on ESPN+. Price: $5.99 a month.

Consider then the plight of football fans in France. The going price to get the bulk of Ligue 1 and Ligue 2 game on most systems this season: about $35 a month.

The French league (LFP) sold the broadcast rights for the largest packages of games it put up for bid to Spanish media firm Mediapro.

The deal was considered a bonanza for French clubs -- annual payments of 1.153 billion euros ($1.36 billion) for all broadcast rights (live coverage and game highlights) for the next four seasons, an increase of 60 percent over the previous deal, to be divided among 40 clubs.

The first problem, which everyone knew going in, was that Mediapro didn't have a network to air the games on.

It had to create one from scratch -- Telefoot, named after the famous Sunday soccer show -- hire broadcast teams and production crews and create shoulder programming and negotiate individual deals with cable providers and streaming services.

Mediapro got creative and struck a bundle deal with Netflix. But it has ended up in court with Canal+ over the onerous terms it was demanding of France's most important cable system.

But that's the least of the problems for Mediapro -- which has only signed up 400,00 subscribers to Telefoot -- and by extension French soccer.

In an interview this week with the French sports daily L'Equipe, Mediapro CEO Jaume Roures revealed that his firm failed to make the second of six installment payments,  due on Tuesday, under the terms of the first year of the contract and asked to renegotiate its contract with the LFP, citing the economic downturn triggered by the COVID-19 pandemic.

Mediapro has French soccer over a barrel. Almost half of revenues French clubs earn are typically from broadcast rights. But this is no typical year.

Matchday revenues have plummeted -- teams were restricted to hosting 5,000 fans because of health restrictions, but the second wave of COVID-19 has forced French authorities to reduce the size of public gatherings it will allow in hard-hit regions.

French soccer has received an influx of new investors, including several American owners, who were aggressively courted by the LFP in recent years and attracted by the new TV deal. They are, to say the least, not happy campers.

If Mediapro can't pay, French clubs face financial collapse. The financial outlook of Mediapro's parent company is not good. Moody's downgraded its credit rating from from B1 to B3 -- “speculative and a high credit risk” -- citing concerns about how it was going to pay for the LFP deal.

In search of a big payday, French clubs were taking a big risk -- and they should have been forewarned. A similar deal with Italy's Serie A to create a Serie A network to air league matches fell apart in 2018 after Serie A could not obtain suitable financial guarantees from Mediapro.

The LFP would have to turn to Chinese holding company Orient Hontai, Mediapro's majority owner since 2018, for payment if Mediapro can't pay. The record of Chinese investment in the European sports broadcast market isn't great.

In 2016, Chinese firms Everbright Securities and Beijing Baofeng Technology bought a majority stake in MP & Silva, the global international media rights company operated by Riccardo Silva, the Miami FC owner. Two years later, MP & Silva failed to make rights payments to the Premier League and Serie A and was soon out of business.