MLS Weekend: Moose is on the loose 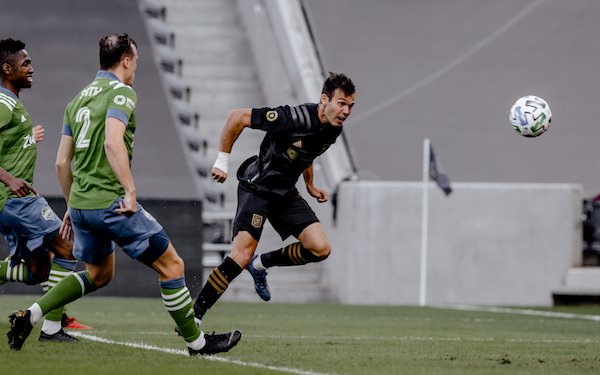 LAFC earned one of its best results in recent months when it beat the Seattle Sounders, 3-1, on Sunday.

But the victory was costly as Canadian Mark-Anthony Kaye, one of the kingpins of the LAFC midfield, left the game in sixth minute with an ankle injury. And seven minutes, Kaye's replacement, Andy Najar, injured his hamstring and had to be subbed.

LAFC head coach Bob Bradley said Kaye's injury was a "bad sprain," and his defeat will add to a host of other absences.

LAFC, which has been without 2019 MLS MVP Carlos Vela since the first game after the MLS is Back Tournament, was the team most impacted by call-ups during the October international window. It lost Brian Rodriguez to Uruguay and Diego Palacios and Jose Cifuentes to Ecuador and then MLS leading scorer Diego Rossi was a late Uruguay call-up when Cristhian Stuani got hurt.

The call-ups forced Bradley to give Danny Musovski, signed from the USL's Reno 1868 in the offseason, just his second MLS start, and he responded with two goals and an assist.

"We certainly feel good about the improvement that we've seen in him," said Bradley, "and so tonight is a big game."

Musovski, whose nickname is Moose, says he is not worried about starting.

The win moved LAFC into fourth place in the Western Conference above .500 for the first time since Labor Day

"We've had many nights where after games we can talk about some of the football," added Bradley, "but tonight is a night more just about really good mentality and an important, really good team win."

Playoff Watch. Toronto FC became the first team to clinch a playoff berth with a 1-0 victory over FC Cincinnati. The Reds lead the standings for both the Supporters’ Shield and Eastern Conference with a record of 11-2-4 and 37 points after 17 matches.

Fans back in Chester. The Philadelphia Union opened up Subaru Park to fans for the first time since the pandemic hit in March and beat the Montreal Impact, 2-1, in the rain.  The win kept the Union, which is perfect at home with a 6-0-0 record, within three points of Toronto FC.

Colorado was supposed to have fans at its Oct. 7 home game against LAFC, but the Rapids have not played their last four games because of a COVID-19 outbreak. Fans will return at Atlanta United on Oct. 24 while Toronto FC might have fans at its final regular-season game scheduled for Rentschler Field in East Hartford, Connecticut.

From Saturday: Caden Clark, from Minnesota to Red Bulls via Arizona

Old college try. Bruce Arena, who made a name for himself as the head coach at the University of Virginia, winner of a record four straight national titles (1991-94), started 10 former college players -- all but Cristian Penilla -- in New England's 2-1 win at NYCFC. They included seven players signed out of college by the Revs.

The Revs are bucking the trend of other MLS teams who have loaded up on international players, or signed domestic players straight out of their academy programs. NYCFC started only one college product -- goalkeeper Sean Johnson (UCF).

Goal of the Day, Maybe Goal of the Year. Erik Hurtado with his best Marco van Basten imitation, scoring from only slightly less of an angle that the Dutchman scored his volley in the Euro 2018 final.