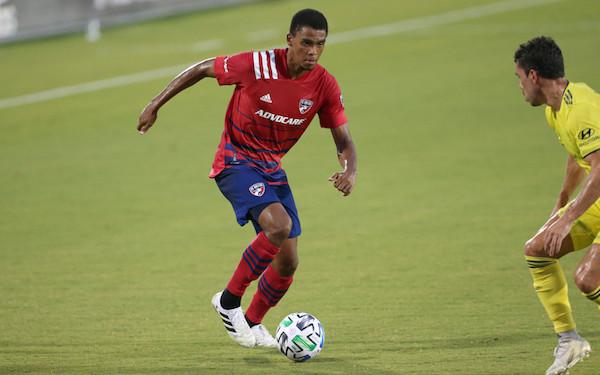 Aug. 12 was supposed to be a form of liberation for U.S. international Reggie Cannon.

After more than five months off, Cannon and his FC Dallas teammates were set to play Nashville SC in the first game back for both teams. COVID-19 outbreaks -- Cannon was among the players infected -- forced both teams to withdraw from the MLS is Back Tournament without playing a game a month earlier, and the match was the first of three makeup games to be played by the two teams.

Since FC Dallas opened Toyota Park to a small group of fans, the national anthem was played before the match, as per MLS's policy. And since it was the first game for FC Dallas and Nashville SC since the killing of George Floyd resulted in an outpouring of support for Black Lives Matter and protests against racial injustice, the players on both teams agreed to kneel during the playing of the anthem.

A few fans threw objects on the field, and others booed the players.

After the game, which FC Dallas lost, 1-0, Cannon participated on the postgame Zoom call and called the behavior of the fans "absolutely disgusting" and added it was "disgraceful" that fans booed after MLS and everyone around the league was on board with the players' protest. He admitted he was upset, given the circumstances.

"You can't even have support from your own fans in your own stadium," he said. "It's baffling to me. As a team, we try to give the best possible product on the field and these last six months have been absolute s*** for us. Absolute s***. We have to watch other people play soccer, and we're just sitting home unfortunately contracting COVID from the unfortunate situations that we were put in. Now an opportunity presented itself to play tonight, and unfortunately we're mad and upset not to get the win, but I was pissed."

In a podcast recorded days later but just released, Cannon told former U.S. men’s national team players DaMarcus Beasley and Oguchi Onyewu, hosts of the Crack Podcast that FC Dallas management unhappy with his comments and “they originally asked me to apologize. They had written out a statement for me that read: 'I apologize to the fans I offended, my choice of words. I let the heat of the moment get to me."

Beasley and Onyewu didn't believe him.

"I kid you not," Cannon said. “I said, ‘With all respect, I’m not apologizing. I didn’t do anything wrong.'"

The next day, FC Dallas issued an unsigned statement. It did not mention Cannon but stated it "supports our players and fans in their right to express themselves in a peaceful manner. The National Anthem was played before last night’s match while the players were on the field which Major League Soccer requires when fans are in attendance. While we understand the decision to stand or kneel for the National Anthem is a polarizing issue, we hope that FC Dallas can be a leader in helping our community accept diverse viewpoints in a respectful way as we all work together in the ongoing fight for racial equality."

As the day went on, threats came pouring in.

“I’ve gotten threats of being lynched in my own city," Cannon told Beasley and Cannon.

He read one of them: “I have the license to conceal carry, and I hope I see you around the streets of Dallas so that I can end your miserable life."

"We want to be clear: We love and support Reggie Cannon. The racist comments and death threats he has received are repulsive and unacceptable. There is no place in our sport, or in our country for that matter, for the kind of horrific vitriol Reggie has had to endure today. Hateful or violent threats are never warranted – especially when they are directed toward a member of our FC Dallas family. We will continue to work together – with our players, our coaches and our fans – against racism and in the cause of equality for all."