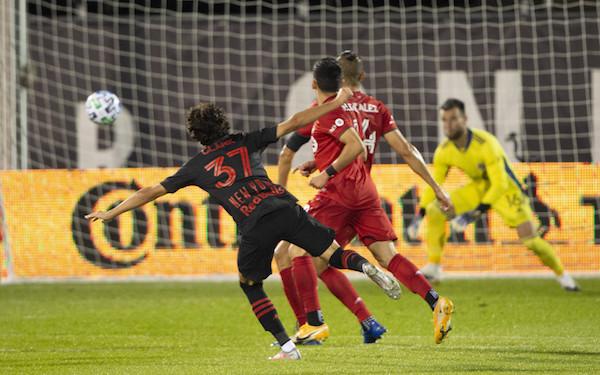 How do you top scoring in your MLS debut?

If you're 17-year-old Caden Clark, you go out and do it again -- only better.

Clark's first goal was the winner for the New York Red Bulls in their 1-0 win at Atlanta United. On Wednesday, the Red Bulls went up to Connecticut to face overall MLS leader Toronto FC, and Clark scored the late equalizer in a 1-1 tie.

It just wasn't any goal.

Clark picked up the ball 25 yards out from Marc Rzatkowski, stumbled but maintained his balance as he eluded his marker, Marky Delgado, then took a couple of steps to his left and fired a left-footed shot into the top corner of the goal.

"I wish I made the save," he said, "but sometimes you need to appreciate the game and good goals being scored, and I think tonight, this young guy had a banger, so congrats to him."

The key to the play was Clark getting just enough distance from Delgado to set up his shot.

"My mind was pretty set on hitting it once I got open," he said. "Everything was kind of set up for it. So I think it was … it wasn’t bad."

The best part of the goal celebration? Red Bulls forward Daniel Royer, ahead of the play, standing with his hands in his head in disbelief.

How bad is the Galaxy? The LA Galaxy dropped a 4-0 decision at home to San Jose, extending its losing streak to six games. It's the longest since 2007, dating back to David Beckham's first season in MLS.

Playoff Watch. The Philadelphia Union became the second team to clinch an MLS playoff berth, after Toronto FC, when defender Mark McKenzie scored the equalizer in the 87th minute in a 2-2 tie at Audi Field with a long-range blast for his first career MLS goal.

Sands injured again. James Sands, who has been outstanding in midfield for NYCFC, will likely to miss the remainder of the 2020 regular season after suffering a fracture in his right foot. He only played eight minutes in the last 10 games of the 2019 regular season after breaking his collar bone.