Unless you very closely follow the progress of American players in Europe, you might be unaware of Nicholas Gioacchini  at SM Caen. But there is a very good chance that in the months and years ahead, he will become more and more of an important player who could play a role for the U.S. national team or Olympic team sooner than later. 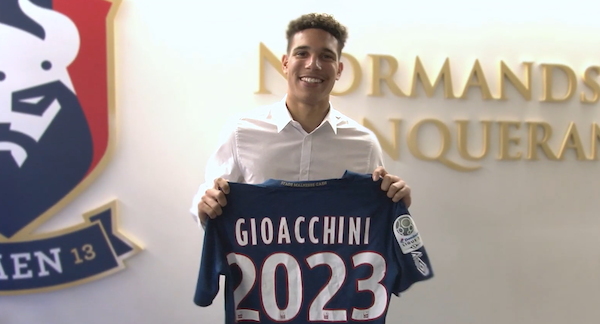 Gioacchini, 20, hails from Kansas City and is the son of an Italian father and a mother from Jamaica. His multinational background often saw him travel around the world. He lived in Missouri until the age of 8 before moving with his family to Italy for four years due to his father’s successful career in the pasta machinery business.

Eventually he returned to the United States to attend high school in Bethesda and play soccer for the ESSA Soccer Academy but eventually moved back to Europe again at the age of 15. This time it was France.

Unlike many top young American players like Christian Pulisic and Gio Reyna who move abroad to pursue their soccer careers. Gioacchini instead moved abroad to follow his family, and while he was talented, the soccer part was simply an aspect of where his family took him.

“My dad's work brought all of us overseas,” Gioacchini, who is fluent in English, Italian, and French, explained. “That is the reason I got here. It wasn't even football -- but I was still extremely passionate about it. I decided to continue it here.”

Eventually when he was in France, he was identified by Paris FC but moved to SM Caen in 2018. His breakthrough came last season when he made the first team. Playing in a variety of positions ranging from the wings, attacking midfield, to center forward, Gioacchini showed promise in the second half of the season – up to the COVID shutdown. Over 16 performances in Ligue 2, Gioacchini scored twice and drew two penalties. He also scored two goals in two Coupe de France games for a total of four goals across all competitions this season.

This season, SM Caen is expected to be a contender for a promotion to Ligue 1 and Gioacchini is a big part of manager Pascal Dupraz’s plans. While Gioacchini has stated that his preference is in the center forward No. 9 position, he is also comfortable on either the right or left wing. Standing 6-foot-0, Gioacchini is powerful, athletic, and skillful and this was put on display in a recent tweet from the team. 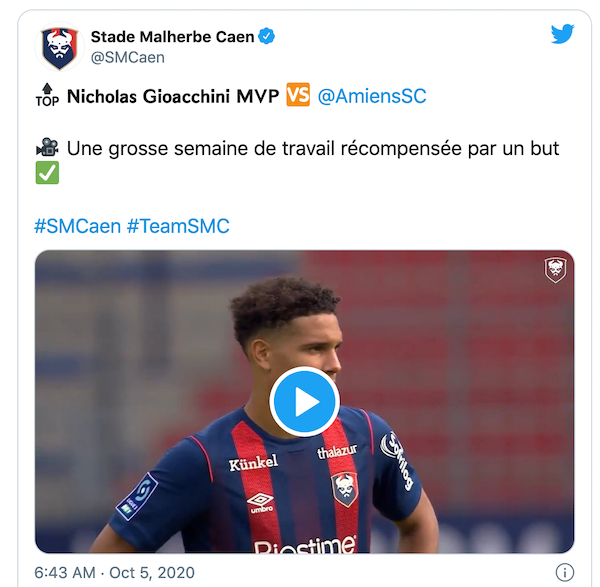 Through six games, Gioacchini has scored twice and has earned rave reviews for his play and SM Caen is off to a strong start, sitting in fourth place before weekend play began on Friday.

In the most recent game before the October international window, Gioacchini scored a very nice goal that proved to be the difference in a 1-0 win over Amines. In this game, he was playing center forward and was later named the game’s man of the match.

His first goal of the season, against Rodez, came when he was playing on the right wing and he scored the opener of a 3-0 win.

Internationally, Gioacchini remains very important to follow. Ahead of the scrapped March friendlies, United States coach Gregg Berhalter contacted Gioacchini. It was later reported by Yahoo Sports in an interview with Berhalter that Gioacchini was likely to have been called up for those games.

“I didn't even know it was him,” Gioacchini said of his call from Berhalter. “When I did realize it was him, I was like: whoa. It was quite an honor to see his number on my phone. … I was not expecting that. I've been wanting to be with the national team for a long time. It is any kid's dream. As soon as I heard about it, I was so happy that it looked like I was in shock. It's been my dream since I was young and it's what I want to do. Representing your country is every kid's goal but not everyone can reach that. It's only a few selected players. I felt really honored and happy.”

Gioacchini has said he frequently watched the U.S. team and was a big fan of the team growing up. He even cites Jozy Altidore and Landon Donovan among his favorite players.

Ahead of the November friendlies, Gioacchini remains one to watch because his performances with SM Caen have only improved since he first caught Berhalter’s eye. He also remains an option for the U.S. U-23 Olympic team if his club would release him.

But all of that talk regarding the United States only continues if Gioacchini can continue to succeed with SM Caen and help lead the club in a promotional race. Gioacchini has frequently told the media that anything less than promotion will be considered unacceptable. To get there, Saturday is another big step against Guingamp.