Dest lined up at left back in place of the injured Jordi Alba but finished the game at right back -- the position he played most of last season at Ajax and for the USA at the U-17 and U-20 World Cups -- after Sergi Roberto went off in the 87th minute.

Dest came close to getting his first assist in the 20th minute and when Lionel Messi took his pass and smashed it off the near post. And deep into stoppage time, the American's cross was headed against the post by Getafe's Togolese defender, Djene.

Sport gave Dest a 6 -- on a scale of 1-10 -- making him just one of three Barcelona players to get a 6 or higher. Pedri, the 17-year-old signing from Las Palmas in his first Barca start, earned a 7, Messi also received a 6.  It noted that debuting at the Coliseum Alfonso Perez isn't easy and Dest was playing on the left side, not his natural position.

Mundo Deportivo gave Dest a 3 -- on a scale of 1-4 -- praising him for his versatility, his attacking instincts and his ability to be involved in the play.

Dest was one of three Barca players whom Marca gave a zero grade -- scale 0-3 -- along with the multi-maligned Antoine Griezmann and Dutchman Frenkie de Jong, who conceded the penalty that cost Barcelona the game. 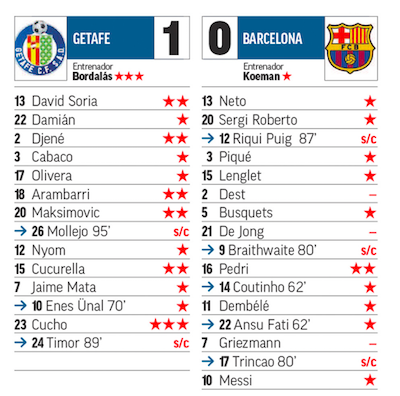 AS noted that Dest settled down after looking nervous at the start but his passing was imprecise and left a lot of room for improvement.