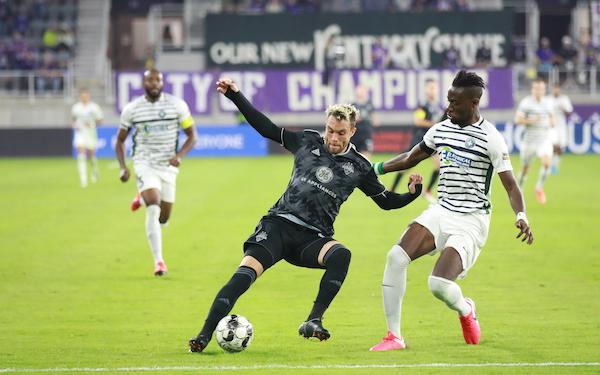 Louisville City is headed back to the USL Championship’s Eastern Conference final.

It won its seventh straight game and extended its unbeaten streak to 13 games with a 2-0 win over Saint Louis FC in its Kings’ Cup rival’s final game. Earlier this year, Saint Louis FC announced it was folding after the 2020 season as the St. Louis market prepares to add an MLS team in 2023.

On Friday, two other USL Championship teams folded. The Philadelphia Union II and Portland Timbers 2 both withdrew from the USL, along with League One's Orlando City B.

Goalkeeper Benjamin Lundt was the star for Louisville City, stopping Wal Fall's penalty kick early in the first half and stopping Todd Warton on a breakaway in the second half with the the hosts holding on to a 1-0 lead.

LouCity will host the Tampa Bay Rowdies, 1-0 winners over the Charleston Battery. Sub Lucky Mkosana had the game's only goal -- his eighth off the bench for the Rowdies -- flicking on a free kick with his head in the 79th minute to defeat the Battery, which handed the Rowdies all three of their defeats during the regular season.

Reno 1868, which entered the playoffs with the best record in the USL Championship, blew a 2-0 lead and fell to Phoenix Rising on penalty kicks after their Western Conference semifinal match ended, 2-2.

Kevon Lambert scored off a rebound in first-half stoppage time to give the Rising new life after Corey Hertzog and Kevin Partida had staked Reno to a 2-0 lead. Solomon Asante, who punched in the winner for the Rising in its controversial 1-0 win over Sac Republic in the quarterfinals, evened the score in the 71st minute.

In the shootout, Phoenix prevailed, 5-4 when Aidan Apodaca's shot was pushed aside in the fifth round and Rufat Dadashov scored.

Phoenix will host El Paso, which also needed a shootout to beat New Mexico United to return to the Western Conference final.

The Locomotive thought it had the game won in regulation, leading, 1-0, deep into stoppage time, but New Mexico United's Romeo Parkes scored on a shot from 30 yards that beat keeper Logan Ketterer to send the game into overtime.

But El Paso won its second shootout of the postseason with a 5-3 victory thanks to Ketterer's save on Parkes. The Locomotive, which beat Tulsa FC, 4-2, in a shootout, has converted all nine attempts on penalty kicks.