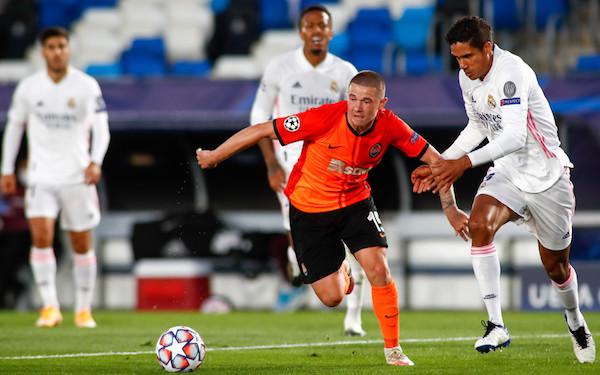 Fans should get ready for some crazy results this season in Europe.

COVID-19 has disrupted the soccer calendar, creating condensed schedules. The October FIFA window closed a day later than usual -- Wednesday, not Tuesday -- in Europe, where federations were allowed to schedule a third (friendly) game to make up for games lost early in the pandemic.

The six matchdays of the UEFA Champions League, which kicked off this week, will be played over the next eight weeks, only interrupted by two midweeks for the November FIFA window.

UCL, Matchday 1: By the Numbers ...
12. Defending champion Bayern Munich added to its Champions League record with its 12th straight win thanks to a 4-0 win over Atletico Madrid.
10. Marseille returned to the Champions League after a seven-year absence with a 1-0 loss at Olympiakos on a stoppage-time goal, its 10th consecutive loss in the competition.

COVID-19 has had a direct effect on preparations, sidelining players in increasing numbers and leaving teams shorthanded as a second wave spreads across Europe.

In Germany, where the government's response to the pandemic has been held up as a model for other countries, forward Serge Gnabry became the first Bayern Munich player who tested positive for COVID-19 and was held out of Bayern's opener against Atletico Madrid on Wednesday.

At least, Bayern Munich had a day's notice. Four hours before its game against Borussia Moenchengladbach kicked off on Wednesday night, Inter Milan learned Moroccan star Achraf Hakimi, who had trained with the team in the morning and was slated to start, was ruled out of the game because he tested positive for COVID-19.

'I’m left with a very bad feeling.' Ukraine's Shakhtar Donetsk arrived in Madrid for its game against Real Madrid without seven starters and three subs because of positive COVID-19 tests as well as injuries. And guess what happened?

Shakhtar went out and scored three goals in the first half and held on for a 3-2 shock win.

“We were lacking a bit of everything today," said Real Madrid coach Zinedine Zidane, "but worst of all we were lacking confidence. It’s difficult to think of what to say when you concede three goals in the first half. We made a mistake with their first goal and from then on it was very difficult. I’m left with a very bad feeling because of everything that happened tonight. It’s a bad game, a bad night, but I’m the coach and I’m the one who has to find solutions. I didn’t find them tonight and it’s a very difficult moment for the players.”

The loss came four days after Real Madrid lost to tiny Cadiz, 1-0, in LaLiga and three days before it faces Barcelona in the first Clasico of the season.

Zidane was very much looking ahead to Saturday's match at Barca, starting the game with his two best forwards, Karim Benzema and Vinicius Junior, on the bench and without captain Sergio Ramos. But he doesn't have the depth he has had in other seasons.

'Operacion salida.' COVID-19's other effect has been to force many big clubs to cut back their spending on the transfer market.

Real Madrid, which suffered a drop of 150 million euros in revenues because COVID-19, let 16 players go in the offseason and signed no new players in what has been dubbed “operacion salida" ("operation exit").

The restructuring was sold to fans and the media as a way to keep Real Madrid financially sound -- a dig at Barcelona, whose own situation is considered extremely fragile -- without losing any of its competitiveness.